Be sure to click on all the images to see larger versions.

December, 1914 and January, 1915 were busy times for Charlie Chaplin.  He made his last movies for Keystone, he signed a large contract with Essanay, he went to Chicago, he made his first movie for Essanay, and he returned to California.

The New York Motion Picture Company, parent of Keystone, said Keystone would carry on without Chaplin.  "...three new recruits have already been signed at the coast studio, it is not decided just which one of them will be given the stellar comedienne (sic - JT) role."  I don't know much about "Dutch" Ward, but I know that he did not hit the big time with Keystone.  I have seen Billy Walsh mentioned in Variety.  Keystone had a comedian named Harry Gribbon.  I don't know Samuel Gribbons.  "The return of a former Keystone funny man is under consideration."  I wonder if that was Ford Sterling.

Chaplin, along with Mabel Normand and Roscoe Arbuckle, is described as a Mutual-Keystone star.  They all attended the San Francisco Screen Club Ball.

I like the photo.  "It is probable that Mr. Chaplin is the first to successfully adapt pantomime to the uses of the motion picture."  It says he was already working at Essanay's Studio in Niles, California, but that does not sound correct.

"Charles Chaplin closed his engagement with Mack Sennett and has gone up the coast to work for the S. & A. under G. M. Anderson, who came to town and closed a contract with the little comedian."  This item also implies that Chaplin would be working in Niles, California right away.

"Our Burg," a column of items about events in Chicago mentions that "Charley" Chaplin had arrived that week and says facetiously that the Essanay studio floor was being reinforced "preparatory for some of Charley's strenuous stuff."  The bottom item mentions that Broncho Billy Anderson spent Christmas in Chicago.


Chaplin's only feature for Keystone, Tillie's Punctured Romance, was still in release.  Poor Mabel Normand had her "d" cut off.  That happened a lot.  Read the November 14 review here:
http://bigvriotsquad.blogspot.com/2014/11/tillies-punctured-romance-november-17.html 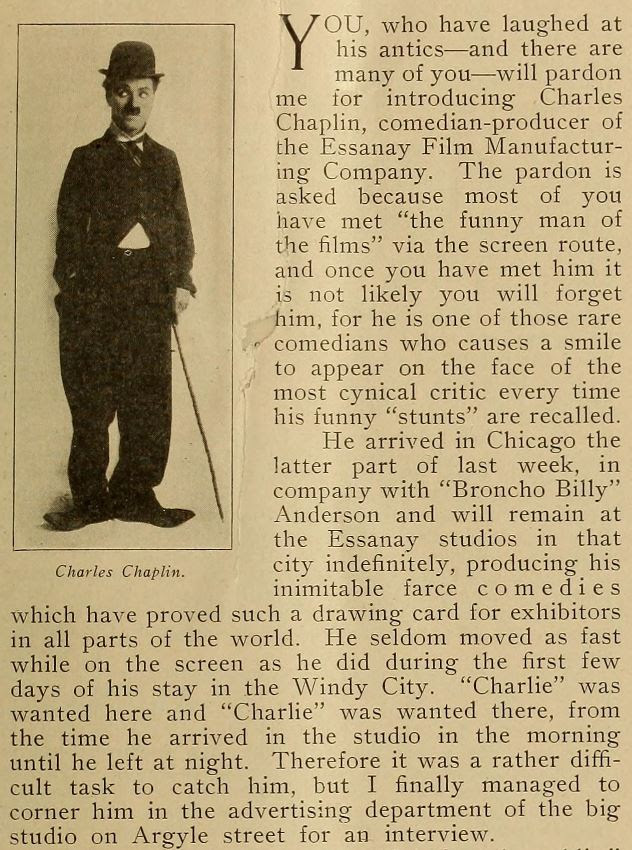 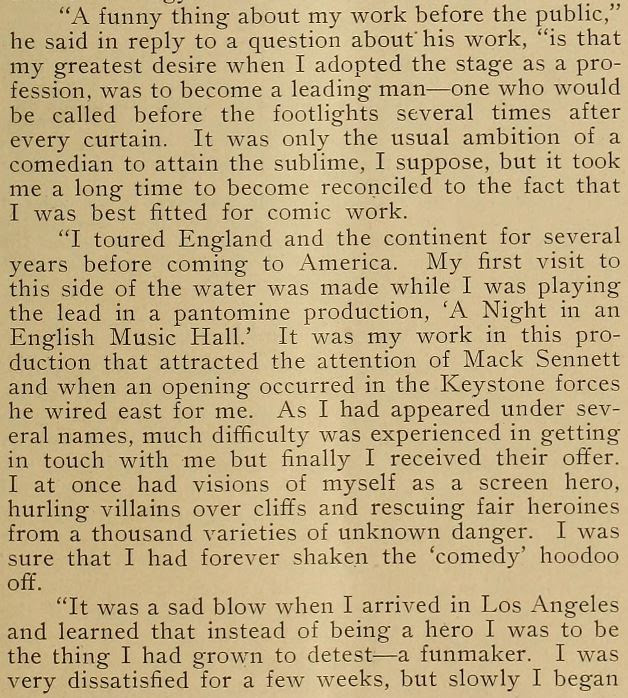 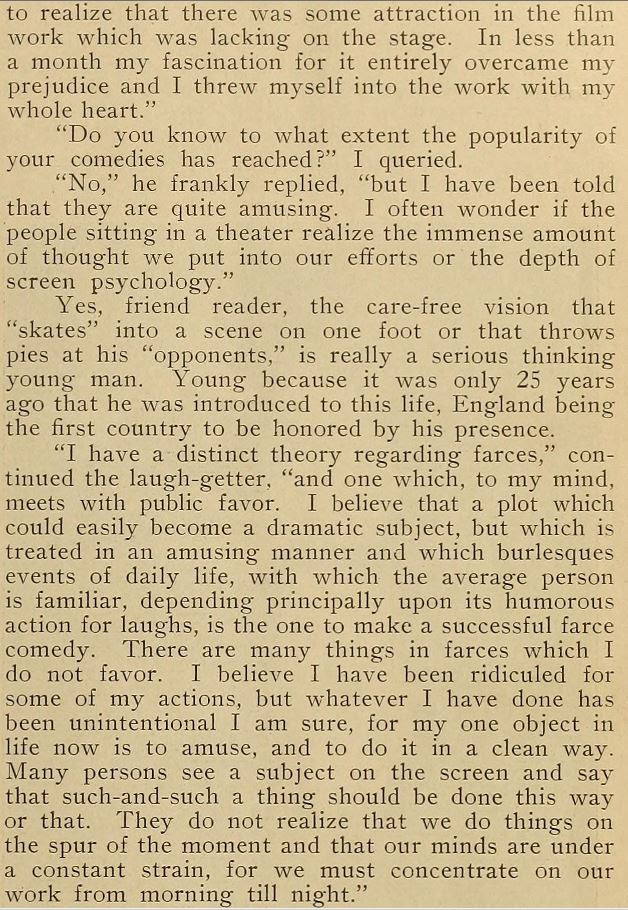 Clarence J Caine's article "Charles Chaplin in a Serious Mood" says that Chaplin "arrived in Chicago the latter part of last week, in company with 'Broncho Billy' Anderson and will remain at the Essanay studios in that city indefinitely, producing his inimitable farce comedies which have proved such a drawing card for exhibitors in all parts of the world."

"'Do you know to what extent the popularity of your comedies has reached?' I queried.

"'No,' he frankly replied, 'but I have been told that they are quite amusing.  I often wonder if the people sitting in a theater realize the immense amount of thought we put into our efforts or the depth of screen psychology'"

Caine refers to him as "Charlie."

"Essanay is now offering to exhibitors three of the greatest stars the photoplay world has ever seen -- the "A.B.C." of drama and comedy -- Mr. G.M. Anderson Mr. Francis X. Bushman and Mr. Charles Chaplin."

Broncho Billy Anderson, who got around a lot, was in New York City.  "Asked as to the acquisition by his company of Charles Chaplin, the comedian, he said that the newcomer would work in Chicago under the guidance of Director Robin.  Mr. Robin has for five years been with Mr. Anderson in the west."  I don't know who director Robin was.

While they were in Chicago for the holidays, Broncho Billy and Charlie Chaplin danced the "Broncho Billy" waltz, while wearing their movie makeup.  "The dance was originated by Mr. Anderson and is one of the weirdest and funniest stunts on or off the stage."  I'll bet.

This full-page Essanay ad says that Chaplin's first comedy for the company "His New Job" (good title) will be released February 1st.  "'It is the best I ever did,' says Chaplin."

This item mentions that Chaplin and his comedy company left Chicago for Niles.  "It was at first planned to have the comedian work in the Chicago studio, but on account of the lack of available exterior locations the climatic conditions, it was thought best to return to the West."  It mentions that Ben Turpin and Leo White, who would become a Chaplin regular, were going along.

Another edition of "Our Burg" says that Chaplin has shaken the dust of Chicago from this feet and headed back to sunny California.
Posted by Joe Thompson at 10:00 AM