Beautiful actress Jean Harlow appeared in some great movies during her brief career. She died at the age of 26 in 1937.
Posted by Joe Thompson at 12:30 AM No comments:

A Happy New Year 'N Everything to Everybody Everywhere -- December 29, 2018

Al Jolson wishes everyone a typically subdued happy new year.
Posted by Joe Thompson at 12:30 AM No comments:

The Rialto Theater in Butte, Montana ran this ad for a double bill of Zane Grey's Riders of the Purple Sage and Roscoe Arbuckle's "The Cook."

Roscoe directed "Camping Out" on Catalina Island.  He appeared with his nephew Al St John, Alice Lake and Luke the dog.  Buster Keaton was away in the army.
Posted by Joe Thompson at 12:30 AM No comments:

RIP Sister Wendy Beckett. We always enjoyed her programs on art.
Posted by Joe Thompson at 11:32 AM No comments:

Merry Christmas, everyone. Peace on earth and goodwill to all. Actress Virginia Grey is checking her list.
Posted by Joe Thompson at 12:30 AM No comments:

"As things look in the costume room of moving picture plant on December 25th."
Posted by Joe Thompson at 12:30 AM No comments:

Email ThisBlogThis!Share to TwitterShare to FacebookShare to Pinterest
Labels: Christmas


100 years ago this month, in December, 1918, Henry (Pathé) Lehrman was expanding his comedy empire.

Sunshine Comedies had a new office building and a new publicity rep.  The managed to spell Lehrman's name wrong in the title. 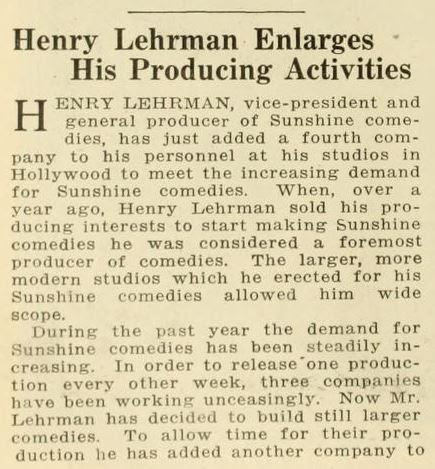 Last month I decided that I haven't been posting enough items about Mabel Normand. Mabel and Mack Sennett co-produced Mickey, which became an enormous hit when it was released in 1918. This twenty-four sheet poster was "displayed on the curtain of Proctor's Fifth Avenue Theatre, New York."


Mabel was under contract to Goldwyn Pictures.  I think Samuel Goldwyn was still using the name Samuel Goldfish. "Goldwyn" was a combination of the names of Samuel Goldfish and his partner, Archie Selwyn.  Most of Mabel's Goldwyn films are lost.

I was sad to learn of the death of actor and director Penny Marshall, who was the sister of Garry Marshall. I remember seeing her in Laverne and Shirley.  After leaving the television show, she directed at least one great movie.

I liked A League of Their Own.
Posted by Joe Thompson at 7:24 PM No comments:

100 years ago this month, trade ads described Harold Lloyd's one-reel comedies in glowing terms. "If Lloyd has any rival at all it may be Chaplin, but we doubt if Charlie surpasses him."  Here we see Snub Pollard and Harold mooning over beautiful Bebe Daniels.

"To see them is to laugh!"  Poor Snub appears to be getting the worst of it.

I like this Swedish newspaper ad for Chaplin's Mutuals.

I also like the Douglas Fairbanks ad mentioned above.

It had run for six weeks, an unusually long time, at the Broadway Theater in New York City.

Chaplin had married 16-year-old actress Mildred Harris on 23-October-1918.  Exhibitors quickly jumped on the opportunity to promote her movies. 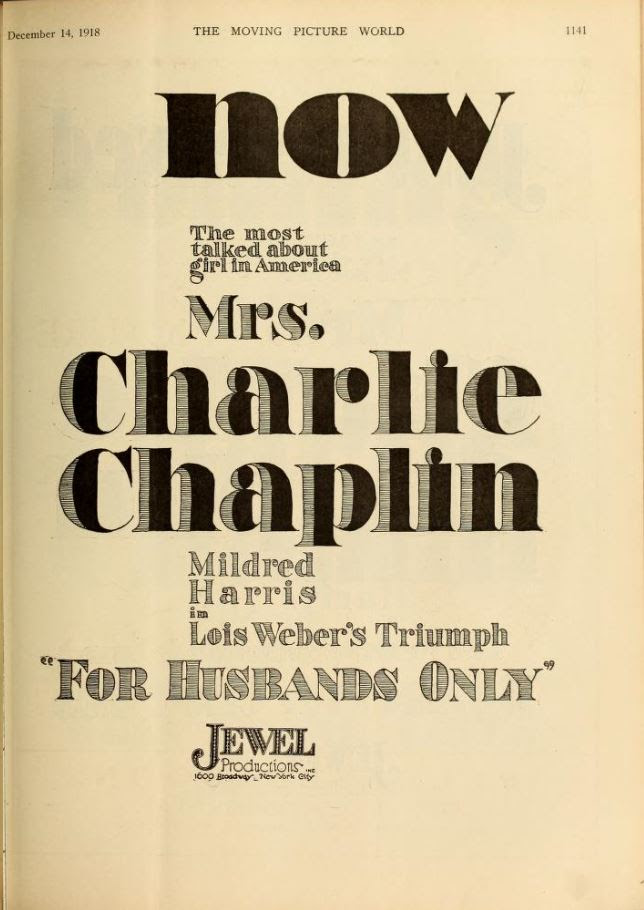 Notice that "CHARLIE CHAPLIN" is much larger than any other name, including the title of the movie.

"18 out of the 25 theatres on Broadway, New York City have booked Mrs. CHARLIE CHAPLIN."

Pat Sullivan's studio released a second animated Chaplin film, ""Over the Rhine With Charlie." Otto Messmer did most of the work. "Several exhibitors have booked these one-reel comics to show with Mildred Harris Jewel productions."

Keeping his nose to the grindstone. 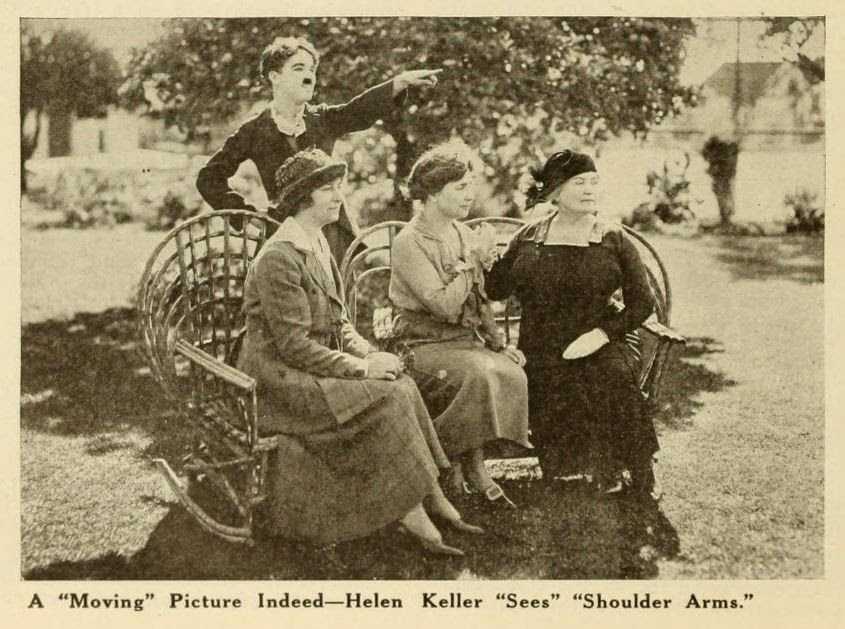 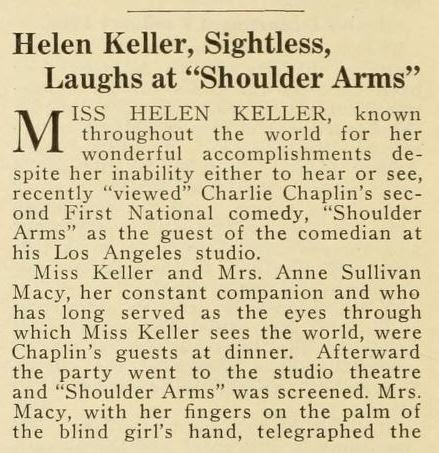 Chaplin had many visitors at the studio.  Deaf-blind writer Helen Keller came with her companion Anne Sullivan Macy.  One would think a blind person would not get much use out of a silent movie, but Mrs Macy spelled a description of the events into her hand and she enjoyed "Shoulder Arms."

"THE motion picture exhibitor occupies a position in his community of an importance equal to that of the local board of education and the teachers in the public schools, in the estimation of the Bishop of Birmingham, England, who visited Charlie Chaplin recently and expressed his opinions and views while noting the comedian's work on his third First National Exhibitors' Circuit release.

"The Bishop of Birmingham has been sent to America by the British Government to study, among other things, the motion picture industry here, particularly the producing branch, and analyze, what the American manufacturers are doing for the attainment of better pictures for the future. He also will make an exhaustive investigation of available facts on the effects of motion pictures in the formation of character in children.

"It was this latter subject which holds the greatest personal interest for the Bishop, and on which he expressed himself at length. As a representative of the British Government, whose reports upon his return to England will be the chief factor in determining the activities of a number of the largest of the British film manufacturers, his views and opinions possess an unusual value and interest for the American exhibitors and producers."

Actress and director Sondra Locke has died.  I enjoyed her work in movies like The Gauntlet and Bronco Billy.  Most of the articles about her devote more time to her relationship with Clint Eastwood than her
Posted by Joe Thompson at 12:30 AM No comments: 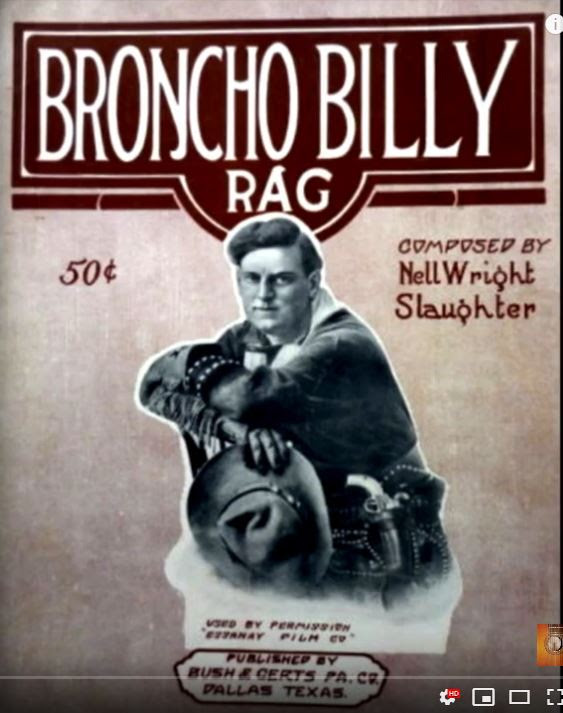 Gilbert M Anderson, Broncho Billy, was the first western star. With George K Spoor, he had founded Essanay (S and A). In 1914, Nell Wright Slaughter published "The Broncho Billy Rag," a charming tune. I can't find much information about the composer except that she lived in Texas and was also known as Nell Wright Watson.

100 years ago this month, many of the short films of Tom Mix were being rereleased.  "Series of Sixteen Two-reel Western Comedy-Drama Re-Issues..."

"It was announced this week that Exclusive Features, Inc., of 126 West Forty-sixth street, New York, has bought outright all negatives of the Tom Mix comedy dramas formerly owned by Selig Polyscope Company."

"Tom Mix does good work in both of these offerings, and there are several excellent riding scenes."

Since the Selig shorts were being rereleased, Fox decided to rerelease the shorts that Tom Mix had made for his studio.

"...the Fox Film Corporation...intends to release its two-reel Tom Mix comedy subjects, which, as part of the Foxfilm Comedy brand, were among the most popular comedies...The Tom Mix two-reel comedy releases will be started January 12, a Tom Mix comedy being released every other week alternately with a Fox-Lehrman Sunshine Comedy."

In late 1918, the so-called Spanish Flu, which killed between 10 and 20 per cent of the people it infected, caused many states, including California, to force movie theaters to close. The opening of the new Coliseum Theater on San Francisco's Clement Street was delayed for a couple of weeks by the influenza-inspired theater ban. It was finally able to open on 22-November-1918.

Air Force was a Warner Brothers' movie released in 1943.  The story follows the crew of Mary-Ann, a B-17 being delivered to Hawaii from the mainland.  They arrive during the attack.  They are able to refuel, but have to leave immediately for Wake Island.  They arrive at Wake while it is under attack.  The Marines ask the crew to take their dog, Tripod.

They move on to Clark Field in the Philippines, which is also under attack.  Harry Carey, the crew chief, learns that his son has been killed.  Mary-Ann is damaged trying to attack Japanese ships, and the pilot is badly injured.  He orders the crew to bail out, but John Garfield, who had washed out of pilot training, brings Mary-Ann back to the base.  I cry during the scene where the crew is with the dying pilot in the hospital and they go through a takeoff procedure.

They rush to repair the airplane, defying an order to burn it.  They take off for Australia, but spot a Japanese fleet.  They radio their position and keep track of the fleet until allied bombers arrive to attack.

At the end, surviving members of the crew are preparing to go on a mission to bomb Tokyo.

I watch this movie every chance I get.