Actress Merna Kennedy played Charlie Chaplin's leading lady in The Circus.  She was married to Busby Berkeley for one year.  She was 36 when she died of a heart attack.
Posted by Joe Thompson at 12:30 AM No comments:

Roscoe Arbuckle appeared with his nephew Al St John and his friend Buster Keaton in "A Country Hero," which is thought to be a lost film. Buster's father, Joe Keaton, made his movie debut in this film.

The film is set in Jazzville.  "Jazz" was a fairly new word at the time.

"It is extremely funny, and remarkable as it may seem to those who have been forced to yawn at the monotony of old tricks, this comedy has actually discovered one or two new ones."

Roscoe's next movie would be a western.  There was some concern about finding a strong enough horse.

Roscoe and Al appear with a locomotive which has mashed an automobile.
Posted by Joe Thompson at 12:30 AM No comments:

I first knew about Rose Marie from reruns of The Dick Van Dyke Show.  Later I learned that she started out as Baby Rose Marie.  She had a radio show and made her first movie, a Vitaphone short, at the age of five.  She appeared in International House with WC Fields, Burns and Allen, Cab Calloway and Stoopnagle and Bud.  Rose Marie died at age of 94.
Posted by Joe Thompson at 5:18 PM No comments:

Billy West was the favorite comedian of the inmates of Sing Sing, a prison in New York state.

Adjacent items state that, contrary to previous reports which I could not find, that King Bee did not rent the Christie studios when they came east and that King-Bee (note the hyphen in this item) had commissioned original scores for its Billy West movies.

King-Bee planned a big Thanksgiving party for everyone at the studio.  This makes sense since they had all come from the East and were probably away from their families.

The Bee-Hive exchange, which distributed King-Bee comedies, was buzzing with business.  They released a set of waltzes composed by star Billy West.  Another thing he did like Chaplin.

"The Prospector" was shot on location in the Rockies.
Posted by Joe Thompson at 12:30 AM No comments:

Merry Christmas, everyone.  Peace on earth and goodwill to all.

Actress Anita Page, who passed away in 2008, was a big star in the late silent and early sound period.  She appeared in Our Dancing Daughters and The Broadway Melody.
Posted by Joe Thompson at 12:30 AM No comments:

TCM recently showed Scrooge, the 1935 adaption of Charles Dickens' "A Christmas Carol."  Seymour Hicks first played Ebenezer Scrooge on stage in 1901.  He appeared in a short film as Scrooge in 1913.  I enjoy this version because it uses a minimum of special effects.  Many of the ghostly scenes are done with shadows and sounds.  Hicks is horrible before and jolly after, but he had a lot of practice.
Posted by Joe Thompson at 12:30 AM No comments:

Harold Lloyd had been successfully appearing in the Lonesome Luke comedies for Hal Roach's Rolin since 1915.  He felt dissatisfied with the unrealistic Luke, who had started as an imitation of Charley Chaplin, and looked for a new character.  Lloyd came up with what he called the "Glass Character."  This ad mentions Lonesome Luke, but by December, he had moved on from producing Lonesome Lukes and was only appearing as the character we know and love.

"Love, Laughs and Lather" was a Lonesome Luke film, but the photo shows Harold as the Glass Character.

Meanwhile, Hal Roach was looking for new stars.  He found the famous circus clown Toto, who was a Swiss man named Alfonso Novello. Toto came to the US during the war and was very successful in vaudeville.  He was less successful in the movies.

"Toto is ... the greatest attraction for children and grown-up children at the New York Hippodrome."

100 years ago today, on 20-December-1917, Charlie Chaplin's favorite heavy, Eric Campbell, died in a drunk driving accident.  Campbell had lived through a hellish year where his wife died suddenly of a heart attack, his daughter suffered major injuries when she was hit by an auto, and Campbell married a much younger woman after knowing her for five days, and she filed for divorce within two months.

Campbell had appeared in most of Chaplin's Mutual comedies, some of the best two-reelers ever made, and, had he lived, would have moved to First National with Chaplin.

Posted by Joe Thompson at 12:45 AM No comments:

Audrey Totter, famous for her appearances in film noir, was born 100 years ago today, on 20-December-1917.  Some sources say she was born on 20-December-1918.  She was in The Lady in the Lake, which was filmed using an unusual first-person method, from the point of view of detective Philip Marlowe.  She died in 2013. 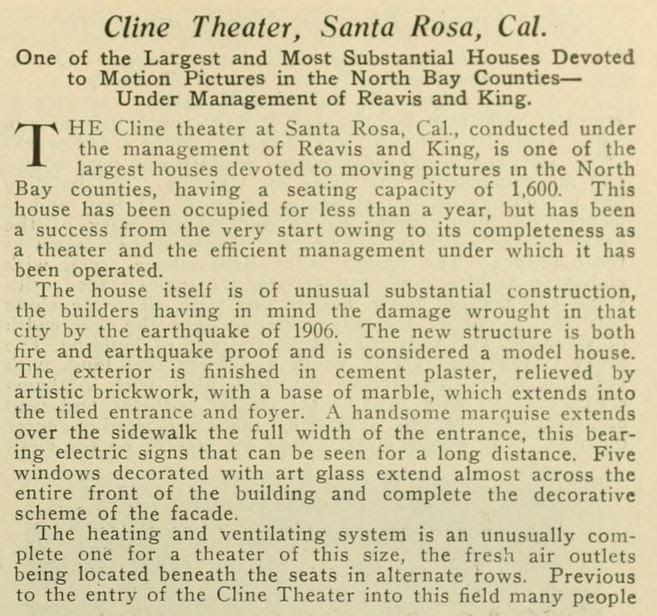 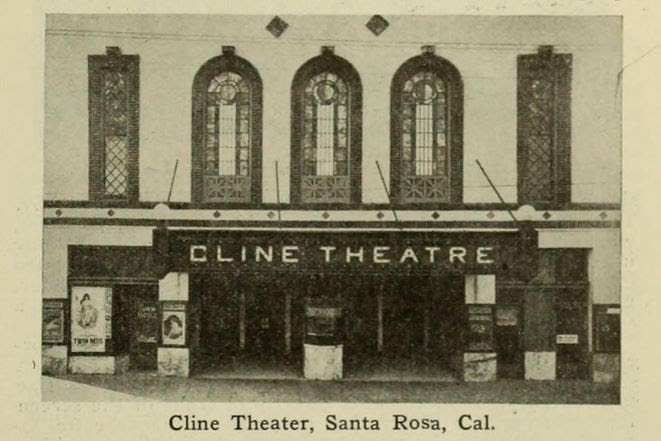 Santa Rosa, the largest town in Sonoma County, was struck by a terrible wildfire in October, 2017.  In honor of the city, here it the Cline Theater, which opened in 1916.  It became the Roxy in 1934.  The building was torn down after being damaged by earthquakes in 1969.
Posted by Joe Thompson at 12:30 AM 2 comments:

I was sad to learn that singer Keely Smith has died.  She worked with and was married to Louis Prima for many years.  She was deadpan, he was manic.  It must have been awful being married to  him, but they made some nice music together.  I remember when she made a comeback in the 1980s.
She appeared in some movies, including Thunder Road with Robert Mitchum.

Essanay continued to re-release a Chaplin film every month. 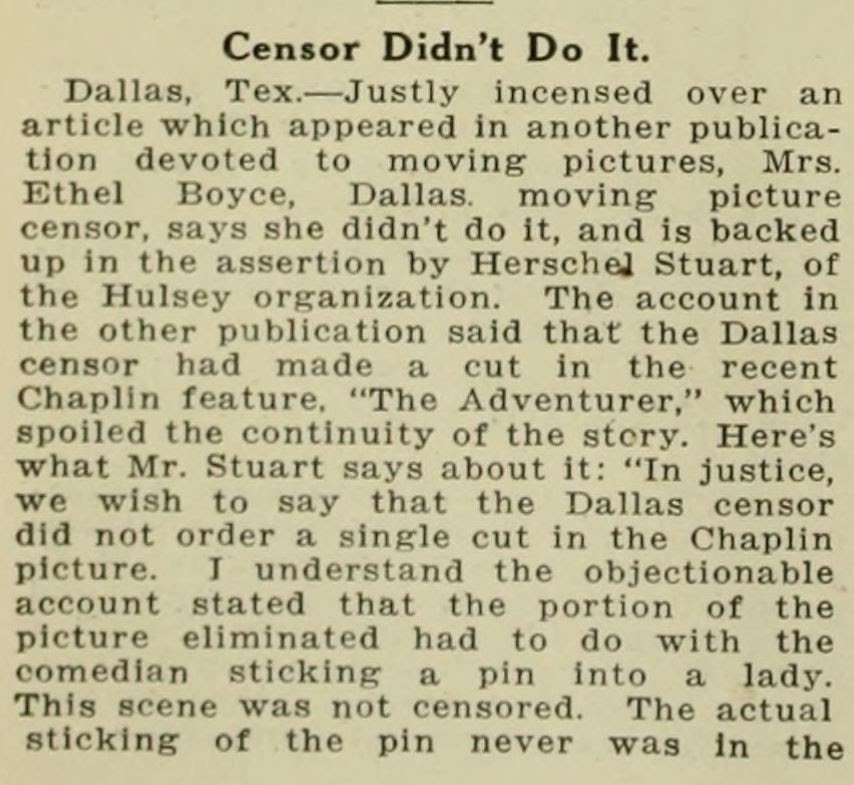 When "The Adventurer" was released, the censor in Dallas was accused of cutting out a shot where Chaplin stuck a lady with a pin.  The censor denied it.

Edna Purviance took advantage of the time off to visit New York "in order to secure a wardrobe for use in her forthcoming pictures with the renowned Charlie in his own company."

Chaplin continued to fight people who made movies that claimed to be his.
Posted by Joe Thompson at 12:30 AM No comments:

Willowy Personification of Grace, Beautiful and With Wonderful Personality -- December 15, 2017

Irene Castle had become famous, with her husband Vernon, as a ballroom dancer.  He left the act in early 1916 to return to his native Britain, where he joined the Royal Flying Corps.  He was a successful pilot, earning the Croix de Guerre.  He was sent to Canada and then the United States to train new pilots.  He died in a flying accident in 1918.

The feature Vengeance is Mine was based on a novel by John A Moroso.

When Irene Castle finished Convict 993 she started on The Mysterious Client.

"The story furnishes Miss Castle with every opportunity for a display of her artistic talents, and for an exhibition of a gorgeous array of gowns."
Posted by Joe Thompson at 12:30 AM No comments:

As I was driving home, they announced on the radio that Bruce Brown, who made The Endless Summer and other surfing movies has died.  Endless Summer is not a great movie, but it is fun to watch and I always enjoy Brown's narration.  I always had trouble relating to the movie because all of the surfers that I knew surfed at Ocean Beach in San Francisco, wearing wetsuits.  He was born in San Francisco.
Posted by Joe Thompson at 8:06 PM No comments:

On 31-March-1903, Young Corbett II defended his world featherweight championship against Terrible Terry McGovern at the Mechanic's Pavilion in San Francisco.  Corbett won by a knockout in the eleventh.  This was their second fight of three.  Corbett won the first two and the third was a draw.  I don't know why the ad calls it a lightweight fight.

McGovern had lost the title to Corbett in 1900.

The next month, the Lubin company released a film of the bout.  I don't know how they could fit eleven rounds on one reel unless it was highly condensed.

Founded in Philadelphia, Lubin used the Liberty Bell in its logo.
Posted by Joe Thompson at 12:30 AM No comments: