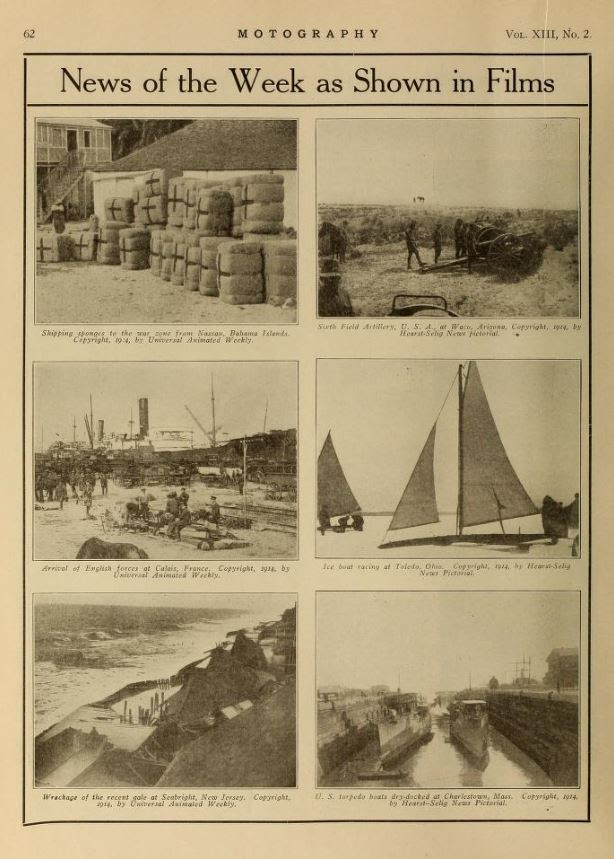 The 09-January-1915 Motography featured "News of the Week as Shown in Films," with items from current newsreels.

"Shipping sponges to the war zone from Nassau, Bahama Islands.  Copyright, 1914, by Universal Animated Weekly."  I wonder if these sponges were for medical use.

"Sixth Field Artillery, U. S. A., at Waco, Arizona.  Copyright, 1914 by Hearst-Selig News Pictorial." The 6th Field Artillery Regiment was formed in 1907.  Someone who knows more about it could probably identify the guns they are firing.  I can't find Waco, Arizona on a map.  I don't know if the regiment was stationed there because of tensions during the Mexican Revolution.

"Arrival of English forces at Calais, France.  Copyright, 1914, by Universal Animated Weekly." Calais, the French port closest to Britain, was a common place for British soldiers to debark.

"Ice boat racing at Toledo, Ohio.  Copyright, 1914 by Hearst-Selig News Pictorial."  Ice boats have always been popular in places where large enough expanses of water get frozen.  An uncle of mine and some of his friends put an airplane engine and propeller on an ice boat.  He said it was a wonder they didn't get killed.

"Wreckage of the recent gale at Seabright, New Jersery.  Copyright, 1914, by Universal Animated Weekly." We have seen this story in two previous weeks.  A major storm on 07-December-1914 destroyed the seawall and flooded the New Jersey town of Sea Bright.