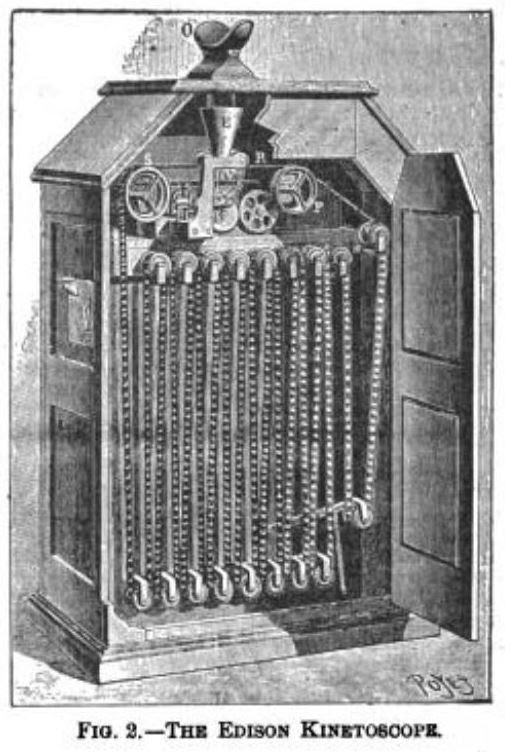 The earliest version of the Kinetograph/Kinetoscope used tiny images on a cylinder rather than on film.  The article is from Manufacturer and Builder, November, 1894. The image is from "The Edison Kinetoscope," The Electrical Engineer, 07-November-1894.

The initial idea of Edison's kinetoscope, relating to the production of motion, is based upon the familiar toy known as the zoetrope, or wheel of life. This rude prototype contains a cylinder 10 inches in width and open at the top, around the lower half of whose interior a series of pictures is placed, representing any sequence of motion it may be desired to portray, such, for instance, as wrestling, jumping, or the swift progress of animals. These movements are seen through the narrow vertical slits in the cylinder during the rapid revolution of the little machine, and are designed to blend into one continuous impression. In the zoetrope, however, the pictures are wood cuts of rude execution, and the limited speed obtainable in the production of these militate against the lifelike effect, producing a series of jerks instead of the desired continuity of motion. When instantaneous photography, as evolved by Maddox and others, was utilized superior results were attained, but it seemed impossible to take pictures at sufficiently short intervals to secure the absolute blending of outline essential to a faithful portrayal of life. In Edison's latest form of kinetoscope the photographic film is in the shape of an endless band from 50 to 150 feet in length, which is passed through the field of the magnifying glass perpendicularly placed, and the photographic impressions pass before the eyes at the rate of 46 per second. Projected against a screen, or viewed through the magnifying glass, the pictures are eminently lifelike.  Antonio (Antonia? - JT) and W. K. L. Dickson in Cassier's Magazine.
Posted by Joe Thompson at 10:00 AM