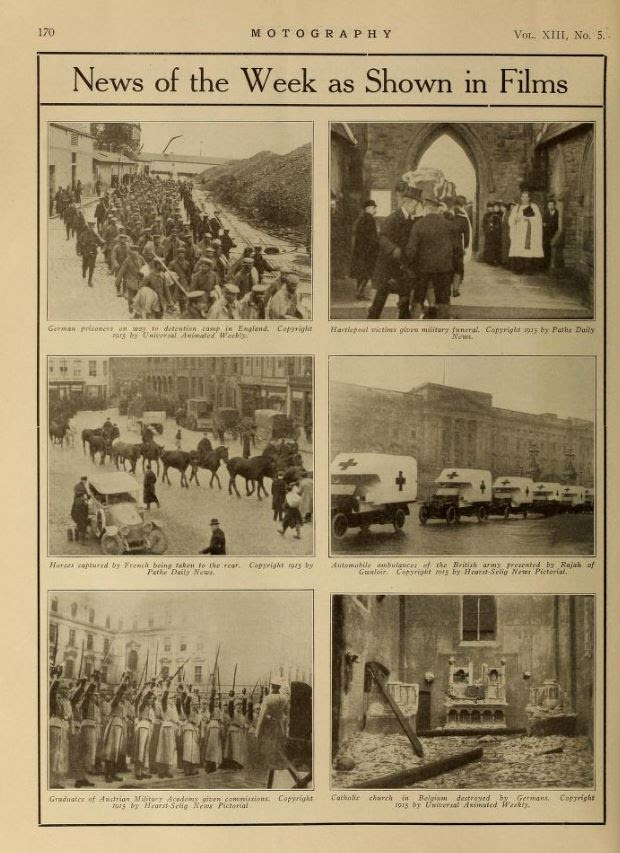 The 30-January-1915 Motography featured "News of the Week as Shown in Films," with items from current newsreels.

"German prisoners on way to detention camp in England.  Copyright 1915 by Universal Animated Weekly."  Images of enemy POWs were good for morale at home.

"Hartlepool victims given miliary funeral.  Copyright 1915 by Pathe Daily News." On 16-December-1914, the German battlecruiser squadron, commanded by Admiral Franz Hipper, shelled British port cities including Hartlepool in County Durham.  The raid killed 137 people, including many women and children.  Four soldiers were among the people killed in Hartlepool.

"Horses captured by French being taken to the rear.  Copyright 1915 by Pathe Daily News." Horses were important to all the armies in the war.

"Automobile ambulances of the British army, presented by Rajah of Gwaloir.  Copyright 1915 by Hearst-Selig News Pictorial." Gwalior is a city that is now in the state of Madhya Pradesh.  The Maharaja in 1914 was Mâdhav Râo Sindhia.

"Catholic church in Belgium destroyed by Germans.  Copyright 1915 by Universal Animated Weekly." Allied propagandists found a lot of material in the Germans' savage treatment of Belgium.
Posted by Joe Thompson at 10:00 AM