This post is part of  Sleuthathon, a Blogathon of Gumshoes, hosted by Fritzi at Movies Silently.   Be sure to click on most images to see larger versions.

The first actor to become famous for playing Sherlock Holmes was American William Gillette. He played Holmes more than 1300 times, in a play he wrote himself, from 1899 to 1932.  Playing a role for many years was not unusual in the American theater of that time.  No one knows how many times Joseph Jefferson played Rip Van Winkle between 1859 and his death in 1905.  James O'Neill, father of playwright Eugene, played Edmond Dantès, The Count of Monte Cristo, more than 6000 times between 1875 and 1920.  In 1896, Jefferson appeared in a series of scenes from Rip Van Winkle for the American Mutoscope and Biograph Company.  At least one is available on YouTube.  In 1912, James O'Neill played in a film version of Monte Cristo for Famous Players, a predecessor of Paramount.  I understand it survives as a paper copyright print.  In 1916, Gillette appeared in a feature film version of Sherlock Holmes for Essanay.  Sadly, this film is lost.  (See the 01-October-2014 update below.)

William Gillette was born in Hartford, Connecticut on 24-July-1853.  He became an actor when he was 20.  By 1881, he was an actor, director and playwright.  Gillette stressed realism in sets, lighting and sound effects and naturalism in acting.  All this was a great change from the melodramatic standards in American theater.  Gillette worked closely with producer Charles Frohman. Gillette's Civil War play Held by the Enemy was a great success in the United States and Great Britain.  Some time in the 1880s, Gillette retired for the first time.

﻿
William Gillette returned to the stage in 1894 with a farce, Too Much Johnson.  This play is remembered today because Orson Welles created filmed scenes that were meant to provide transitions for a 1938  theatrical production.  Because of various problems, he was never able to use the filmed scenes.  They were thought to have been lost in a fire, but a print has recently been rediscovered.

In 1895, Gillette wrote another popular Civil War play, Secret Service.  The star in the original production was Maurice Barrymore, the father of John, Lionel and Ethel Barrymore.  I remember seeing a production on PBS in the 1970s.

Author Arthur Conan Doyle had killed Sherlock Holmes in 1893, but, needing money, wrote a play about the character.  It was not a very good play, but Conan Doyle's agent sent it to Charles Frohman, who suggested that Gillette could write a new adaption.  Conan Doyle agreed, but insisted that there should be no love interest for Sherlock Holmes.  Gillette sat down and read the stories and novels, which he had not read before.  Gillette worked on the play while touring in Secret Service.  He exchanged telegrams with Conan Doyle to get clarification.  One telegram said: "May I marry Holmes?" Conan Doyle's reply said: "You may marry him, or murder or do what you like with him."[


The tour reached San Francisco in November, 1898.  Secret Service opened in the Baldwin Theater, which was part of the Baldwin Hotel.  "... with William Gillette and identically the same splendid cast seen during the triumphs in New York and London."  Joaquin Miller liked to call himself "The Poet of the Sierras" and "The Byron of the Rockies."  He visited the Yukon Gold Rush in 1897 and had two toes amputated because of frostbite.

In 1878, Elias J "Lucky" Baldwin built Baldwin's Hotel and Theatre at the corner of Powell and Market in San Francisco, where the Flood Building now stands.

Gillette stayed across the street and down a few blocks at San Francisco's premiere hotel, the Palace.  Gillette's secretary, William Postance, stayed at the Baldwin, keeping the manuscript of the play in his room.  The Baldwin Hotel caught fire early in the morning of 23-November-1898.  Postance escaped, but could not save the manuscript.  At 3:30 in the morning, Postance made his way down the street and knocked on Gillette's door at the Palace.  Gillette asked "Is this hotel on fire?"  Postance said it was not.  Gillette said "Well, come and tell me about it in the morning," and went back to bed.

The play reopened at the California Theater on 28-November-1898, thanks to the "San Francisco Artisans" who produced "a complete new equipment of scenery, costumes and accessories."  And Gillette went back to work, to write Sherlock Holmes again.

The four act play, Sherlock Holmes, or The Strange Case of Miss Faulkner, opened in New York in 1899 and London in 1901.  It was a big hit.  Gillette introduced Alice Faulkner as a love interest for Holmes.  He gave a name, Billy, to the pageboy.  He wore the deerstalker hat which had appeared in a few illustrations for Holmes stories.  He introduced the curved pipe, which had never appeared in illustrations.  A pipe with a straight stem would have hidden his face from the audience.

In the 1901 London production, Billy the pageboy was played by a young man named Charles Chaplin.  In his My Autobiography, Chaplin spoke highly of Gillette and Marie Doro, who played Alice Faulkner.

Gillette revived many of his plays over the years, but Sherlock Holmes was always in demand.

Producer Charles Frohman died in the sinking of the RMS Lusitania, which was torpedoed by German submarine U-20 on 07-May-1915.  He had a bad leg so he could not get into a lifeboat.  He helped tie life vests to baskets containing babies who had been left in the nursery.  He joined hands with a group of people on the deck and waited for the ship to sink.  His last words, according to the only member of the group who survived, were adapted from Peter Pan, which he had produced: "Why fear death? It is the most beautiful adventure that life gives us."

In 1916, the Essanay Company produced a seven reel feature starring William Gillette as Sherlock Holmes.  The movie is lost.  Many people felt that Gillette was too old for the role, but apparently the movie did well at the box office.  This was Gillette's only film performance.  Don't believe the Internet Movie Database, which has him mixed up with another actor.

The film was directed by Arthur Berthelet.  He directed other movies, but I have never heard of any of them.  Arthur Fielding played Doctor Watson.  He made a few silents, then later had a long career playing small parts in talkies.  Marjorie Kay played Alice Faulkner.  Sherlock Holmes is her only credit in the Internet Movie Database.

"The Greatest Super Feature of the Year."

"'Greek meets Greek.'  The emperor of crooks meets the king of detectives -- the world-famed Sherlock Holmes."  Note that the film was "Released through the Big Four -- Vitagraph, Lubin, Selig, Essanay, Inc."  VLSE was built on the ruins of the Motion Pictures Patents Company, which had tried to establish a monopoly on film production and distribution. 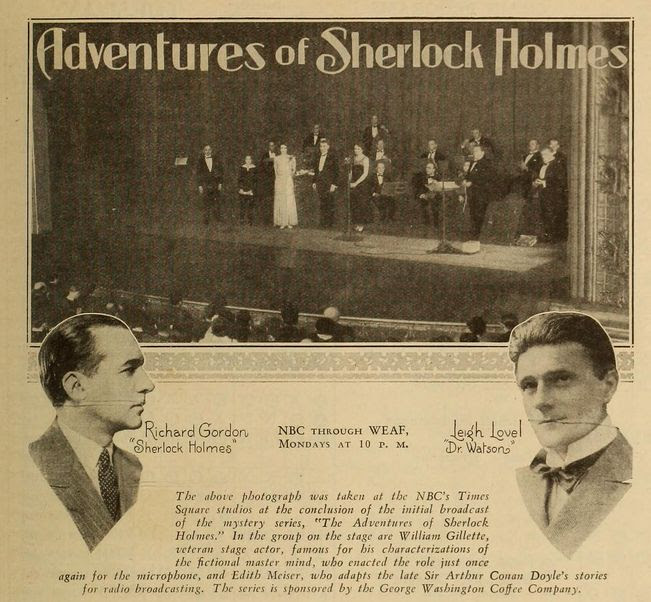 This article from the December, 1930 What's on the Air talks about how William Gillette played Sherlock Holmes on the first episode of a new NBC radio series.  The caption says Gillette is visible in the photograph.  Richard Gordon played Sherlock Holmes in following episodes.  There are no surviving recordings of the broadcast.

There is a surviving recording of William Gillette's voice as he played Sherlock Holmes.  It was made in 1934 when Gillette was 81 years old.  G Robert Vincent made it for his private collection of spoken word recordings. FC Packard, a Harvard professor, played Doctor Watson. I don't know who played Alice Faulkner.  The recording is available in two parts on YouTube.

Gillette played Holmes more than 1300 times.  He retired several times, after long farewell tours, and then made triumphant returns.  His last farewell tour ran from 1929 to 1932.  William Gillette died in Hartford, Connecticut in 1937.

Gillette's home now stands in Gillette Castle State Park.  Gillette had a miniature steam railroad that ran around his estate.  Speaking as a fellow railfan, I am jealous.  Here is a clip from a 1927 Fox Movietone newsreel featuring Gillette and his train.  Note that the title says he was "retired from the stage":

William Gillette's play Sherlock Holmes served as the basis for other film adaptions.  I wonder if his version is lost because later producers tried to eliminate the 1916 movie so an unscrupulous distributor would not rerelease it. 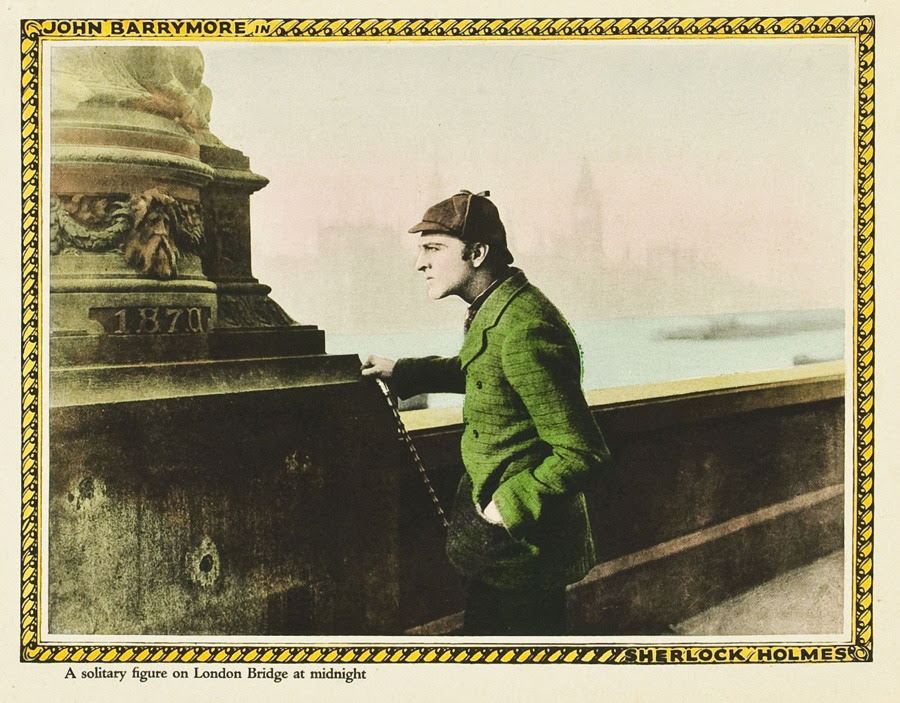 In 1922, John Barrymore starred in an adaption of Gillette's play.  Roland Young, who later played Cosmo Topper, was Doctor Watson. Carol Dempster, DW Griffith's protégée, played Alice Faulkner.  This was her only movie not directed by Griffith.  Gustav von Seyffertitz was good as Professor Moriarity.  William Powell played one of Holmes' college friends.  Read more about it at Movies Silently: http://moviessilently.com/2014/03/16/sherlock-holmes-1922-a-silent-film-review/

The film was thought to be lost for many years.  Dedicated restorers put it back together from thousands of separate shots, often in multiple takes, that had been cut up and put together out of order, probably for tinting. I have seen it, but I must admit that I found it slow.

In 1929, Clive Brook became the first actor to play Holmes in a talkie, The Return of Sherlock Holmes.  Brook played Holmes again in 1930 in a sketch in the revue Paramount on Parade and in 1932, in Sherlock Holmes, adapted from Gillette's play.  Reginald Owen played Doctor Watson.  Miriam Jordan was Alice Faulkner.  Ernest Torrance was Professor Moriarity.  The photo, from the March, 1930 New Movie, shows William Powell as Philo Vance and Clive Brook as Holmes in Paramount on Parade.

In 1939, Basil Rathbone played Holmes in The Hound of the Baskervilles at 20th Century-Fox with Nigel Brice as Doctor Watson.  For much of my life, they were nearly everyone's favorite Holmes and Watson.  Also in 1939, they appeared in The Adventures of Sherlock Holmes, another adaption of Gillette's play.  Ida Lupino played Ann Brandon, who was based on Alice Faulkner.  George Zucco, one of my favorite over-the-top actors, played Professor Moriarity.

Rathbone and Bruce made 12 more movies with lower budgets at Universal, and played Holmes and Watson on the radio.  Rathbone felt that becoming so identified as Holmes hurt his career.

In 1981, a television series called Standing Room Only did an adaption of the play with Frank Langella as Sherlock Holmes.

William Gillette was not the first person to play Sherlock Holmes on the stage, but he has influenced everyone who played the part on stage, film, radio and television since he wrote the play and played the part.

So where did I find the title of this post?  On 25-September-1938, The Mercury Theatre on the Air on CBS radio performed a version of Gillette's play, adapted by Orson Welles, who also played Holmes.  Some people said he did an excellent imitation of Gillette.  Others said Welles sounded bored.  Search the web and you can find the episode and make up your own mind.  In his introduction to the episode, Welles said "It is too little to say that William Gillette resembled Sherlock Holmes.  Sherlock Holmes looks exactly like William Gillette."

This post is part of  Sleuthathon, a Blogathon of Gumshoes, hosted by Fritzi at Movies Silently.  Thank you to Fritzi for all the hard work.  Thank you to everyone who visited and I encourage you to read as many posts as you can. 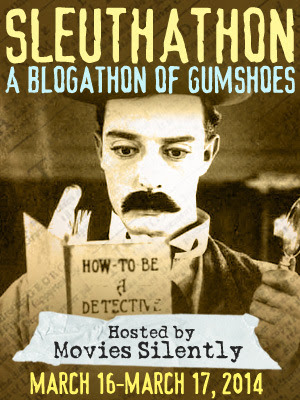 The San Francisco Silent Film Festival announced that William Gillette's Sherlock Holmes is no longer a lost film. A print has turned up at the Cinémathèque Française.  The  Cinémathèque and the Festival are working together on a restoration.  I'm excited.
Posted by Joe Thompson at 12:30 AM 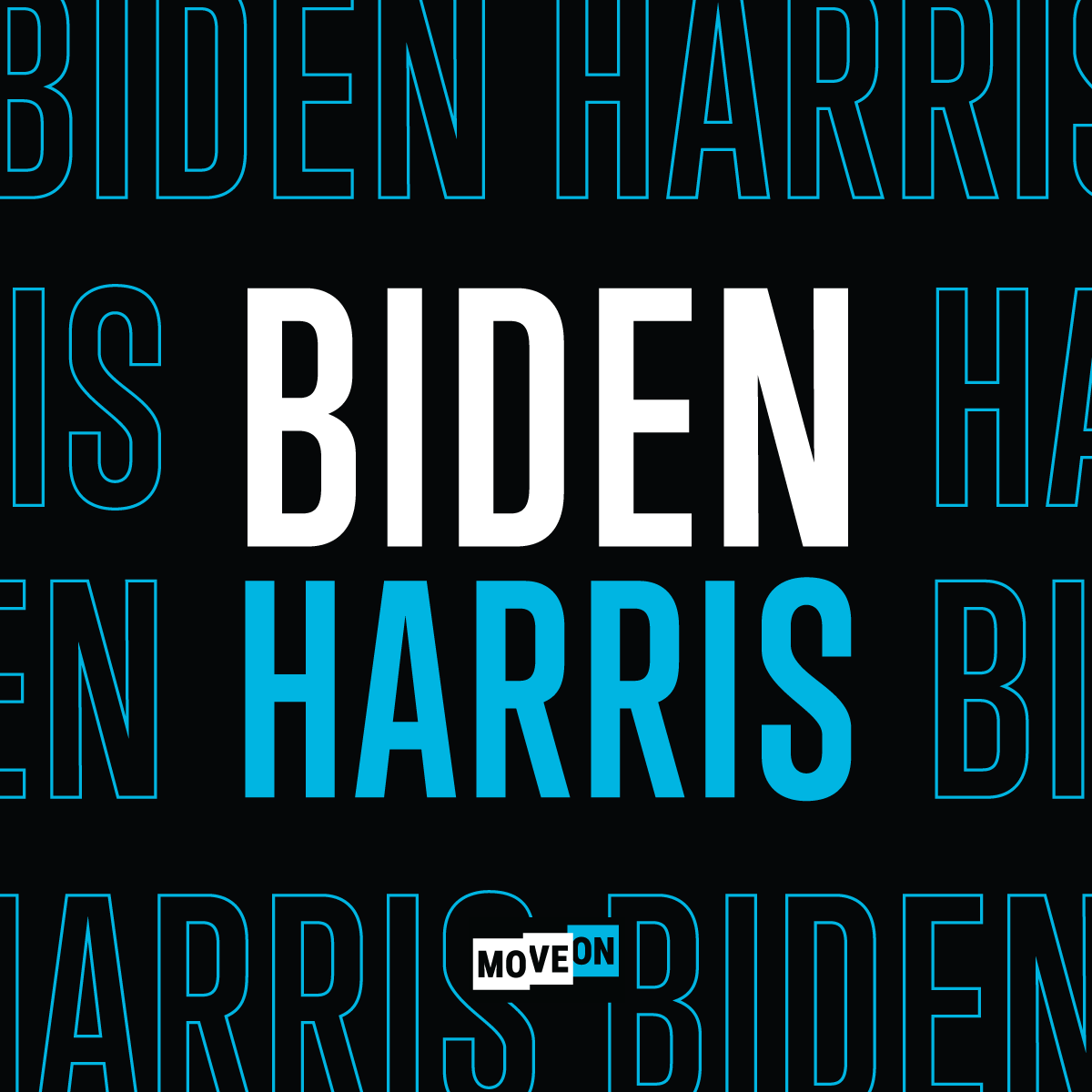 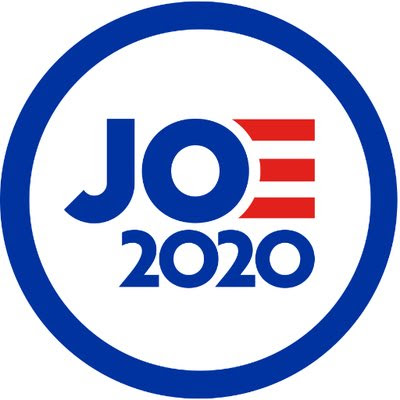 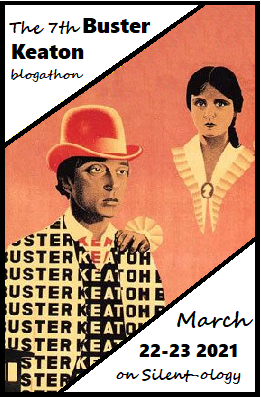