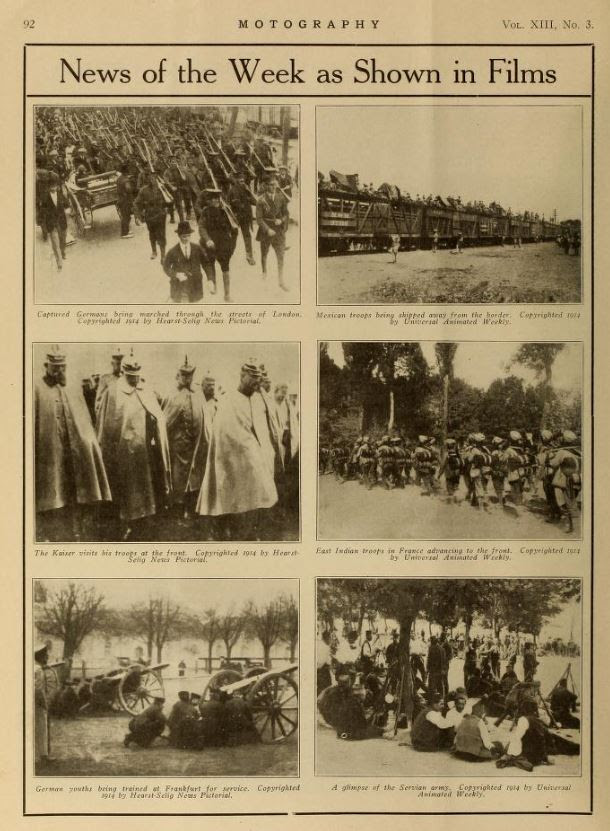 The 16-January-1915 Motography featured "News of the Week as Shown in Films," with items from current newsreels.

"Captured Germans being marched through the streets of London.    Copyright, 1914 by Hearst-Selig News Pictorial."  Displaying enemies who have been taken prisoner is a common way to boost civilian morale.

"Mexican troops being shipped away from the border.  Copyright, 1914, by Universal Animated Weekly." I wonder if they were near the border because of tensions during the Mexican Revolution.

"The Kaiser visits his troops at the front. Copyright, 1914 by Hearst-Selig News Pictorial."  Kaiser Wilhelm II was Supreme Warlord of the German Empire.

"East Indian troops in France advancing to the front.  Copyright, 1914, by Universal Animated Weekly." The British brought soldiers from India, but they did not do well in the European winter climate.

"German youths being trained at Frankfurt for service.  Copyrighted 1914 by Hearst-Selig News Pictorial."  The major powers in the war all relied on new classes of conscripts coming of age every year.  Most countries wound up lowering the minimum and raising the maximum draft ages during the war.

"A glimpse of the Servian army.  Copyrighted 1914 by Universal Animated Weekly." The war began when Austria-Hungary declared war on Serbia (often spelled Servia back then) on 28-July-1914:
http://cablecarguy.blogspot.com/2014/07/austria-declares-war-july-28-2014.html