This post is part of the First Annual Buster Keaton Blogathon, hosted by Lea at Silent-ology.  This post is an expansion of an item I did on my other blog for a 2007 blogathon.  Be sure to click on most images to see larger versions.

Joseph Frank Keaton was born on 04-October-1895 in Piqua, Kansas. His parents, Joe and Myra Keaton, were show business veterans. They were performing that night in Piqua, so that is where he was born.

There are many interesting stories about his childhood, and some are true. One story says that Joseph Frank was nicknamed "Buster" by Harry Houdini, who travelled in the same shows as his parents. Houdini saw the infant fall down a flight of stairs and pop up unscathed at the bottom. "That was a buster your kid took!" said Houdini, or words to that effect. Other sources say that Houdini didn't travel with the Keatons until Buster was older. Too bad.

In any event, by the time Buster was three or four, the act had become "The Three Keatons". Myra played the saxophone while Joe threw Buster around the stage. Buster learned to take spectacular falls without getting hurt. The act was pure slapstick, except for the saxophone. Joe and Buster hit each other with brooms. Joe picked up Buster by a suitcase handle sewed to his coat and threw him high against the backdrop. Buster slid down and again and again popped up unhurt. This got great laughs, unless he smiled. This is where Buster learned to keep a straight face.

This 1900 item mentions Joe and Myra but not Buster.  Tony Pastor was a pioneering vaudeville impresario.

Joe and Myra were not important enough to be mentioned in Pastor's ad for the same show.  Notice that Vitagraph motion pictures were also on the bill.

Joe and Myra, "Diverting Acrobatic Comedy Artists," did appear in the ad for the Columbia Theater in Saint Louis in late 1900.  No sign yet of Buster.  The Kinodrome was a projector promoted by George K Spoor, who founded Essanay with Broncho Billy Anderson in 1907.

One month later, just after Buster turned six, 'The 3 Keatons And 'The Man With the Table' were playing the Orpheum Theater in San Francisco.  A stout table was a prominent prop in their act.  I don't think there was a fourth person.  The Orpheum showed Biograph movies.

﻿
Here we see that as early as February, 1903, when Buster was seven years old, an ad referred to the act as "BUSTER and the other two Keatons."  The act was appearing in Detroit and Youngstown.  They had ""a choice line of Bumps for sale about June 8.  The act that hasn't lost the least lately."

"Have you seen Buster, the most talked off (sic - JT) Comedian in Vaudeville, at Proctor's 125th St., N.Y., this week?  O, fudge, daddy fixed it with the judge."  The New York Society for the Prevention of Cruelty to Children, often called The Gerry Society, fought to keep children younger than 16 off of the stage in New York. Joe Keaton fought the society in the courts.

On New Year's Day, "The 3 Keatons/Joe, Myra and Little Buster" were back at Tony Pastor's "as an extra added attraction."  Pastor was showing Vitagraph movies.

In March, 1905, "Joe, Myra and 'Buster' Keaton" were at Hyde and Behman's in Brooklyn.  That theater showed movies using Edison's Kinetograph.

Here is an article about the same engagement, from the same issue of the Sun:
from IN THE THEATRES THIS WEEK

The chief attraction at Hyde & Behman's this week is the appearance of the English actress Jessie Millward, supported by Percy Herbert and an efficient cast in Hartley Manners's one act play, "A Queen's Messenger." Miss Millward plays a Russian female spy. The programme contains ten more special features, including the Three Keatons, with their odd little youngster, "Buster"; the Italian Trio of singers, Bailey and Madison, in fun and acrobatics; Lew Hawkins, the minstrel; Julia Kingsley and Nelson Lewis, in a farce, "Her Uncle's Niece"; Lillian Shaw, vocalist, and Rice and Elmer, triple bar performers.

"...including the Three Keatons, with their odd little youngster, 'Buster'."

The one-act play by J Harley Manners, "A Queen's Messenger," was the basis of the first dramatic television broadcast in the United States, done by W2XAD, Schenectady, New York, on 11-September-1928.


In February, 1908, the "3 -- Keatons -- 3" were back at the San Francisco Orpheum and Buster was 12. Note that the ad bills "Joe, Myra and Buster, with Jingles Thrown in for Good Measure." Jingles was Buster's brother Harry. Sister Louise sometimes expanded the act to the Five Keatons

Here is an article about the same engagement, from the same issue of the Call:
The Orpheum announces for the week beginning this afternoon a program of extraordinary novelty. Miss Alice Norton, who will head the bill, is a young German chemist who for seven years was a student under Professor Pictet, one of the most celebrated of Teuton scientists. She manufactures in the sight of her audiences rubies, sapphires and other gems, which, it is claimed, bear such striking resemblance to "the real" thing that only the most expert lapidaries can tell them from the genuine stones. She claims that there is no test which science has yet devised which is too severe for her manufactured jewels to stand. Miss Norton begins her performance by taking common clay and placing it in a crucible. She adds chromic acid and the clay is reduced to the consistency of thin mud. A powder is then sprinkled into the crucible and sparks of fire are emitted by the consequent intense heat set up by the chemical reaction. A light, so vivid that the eye cannot look at it, is given out. The clay, becomes a mass of quartz, which when broken up with a heavy hammer discloses the gems which are the products of Miss Norton's skill.

The Melani trio, which will make its first appearance this afternoon, will furnish, it is promised, 15 minutes of excellent music. The members of the trio are singers and instrumentalists. The three Keatons will present an eccentric comedy act highly spoken of. Harry Allister is a clever impersonator who is well recommended in the eastern press, and Mme. Czinka Panna will show what a cymbal virtuoso can do. Her performance is enlivened by a dog that dances and another one that plays the organ. This week will be the last of Hilda Spong and company, and John C. Rice and Sally Cohen will also concluded (sic - JT) their local engagement at the end of this week. They will appear in a new sketch, "The Kleptomaniac."

I was fascinated to see that a chemist was at the head of the bill. Professor Pictet was Amé Pictet, co-discoverer of the Pictet–Spengler reaction, which occurs in (no kidding) ketchup and soy sauce.

John C Rice was the star of Edison's "The Kiss."


In 1909, Variety reported that the Keatons would be able to appear in New York in October, after Buster turned 16.  The Gerry Society had gotten the act banned about two years before.
﻿﻿
In the same issue, this ad for "Buster with the 3 Keatons, the Same Old Rip-Roarers" says that Buster "Will be a theatrical man, Oct. 4, 1909.  GOOD-BYE, MR. GERRY."

I guess this ad was intended to remind the Gerry Society that Buster had already turned 16.

The 3 Keatons wish Christmas Greetings "to everybody except Damar, Fink and Butt"  Damar was the stage manager at London's Palace Theater.  Alfred Butt was the manager.  Herman Finck was the musical director. Alfred Butt invited the Keatons to play the London Palace.  Joe felt that they were treated badly, and left for America after one performance.

Buster left the act in early 1917 because Joe's drinking had gotten out of hand.  Buster was offered a part in a Broadway revue, The Passing Show of 1917.  During rehearsals, he met Roscoe Arbuckle, who invited him to visit the studio where he was working on the first entry in a series of two-reel comedies.  Buster stayed with Arbuckle, with a brief interruption for army service in World War One, until Arbuckle went into features.  Buster made a series of short comedies that are among the best ever produced, and then went into features.

Buster continued to support his family.  Joe, Myra and Louise appeared in his short "The Electric House," but the footage they appeared in is lost.  Joe appeared in several of Buster's short films, then as the locomotive engineer in Our Hospitality, as the father of the girl in Sherlock, Jr, and in smaller parts in other features. 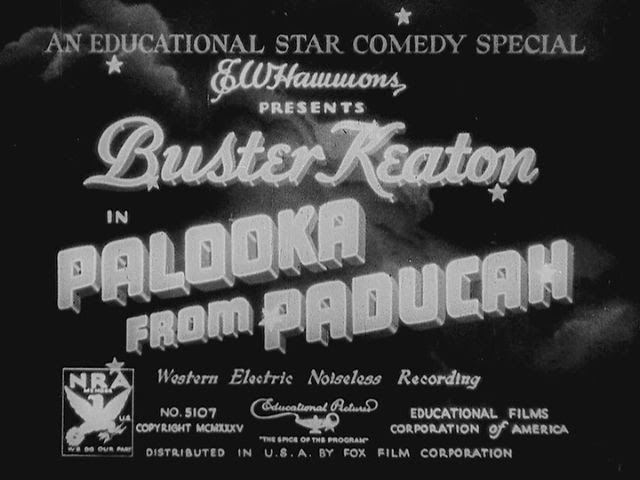 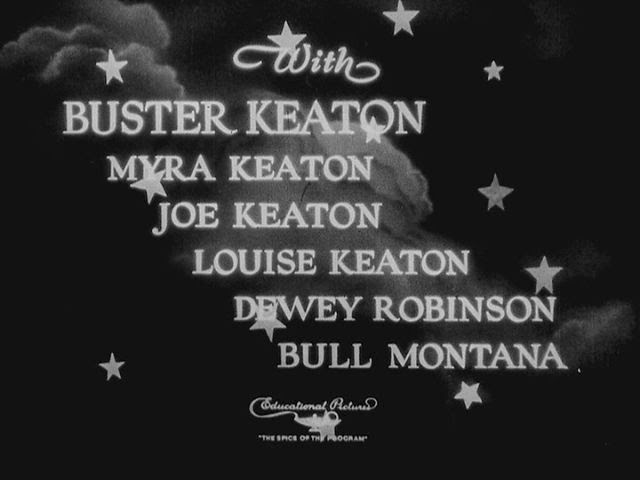 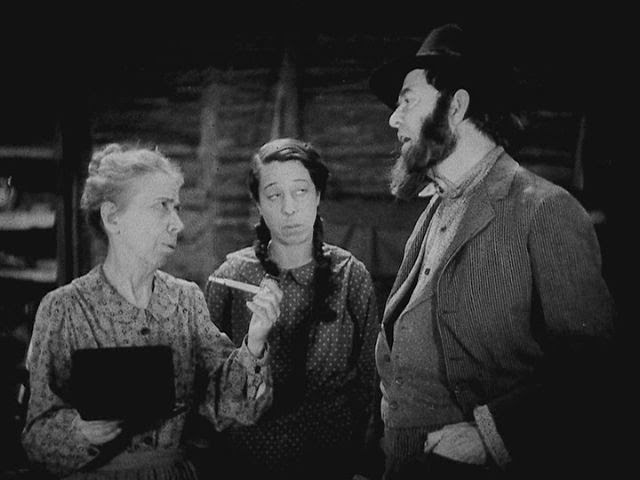 Myra, with her pipe, which she really smoked, Louise and Joe.  Louise and Buster both took after Myra. 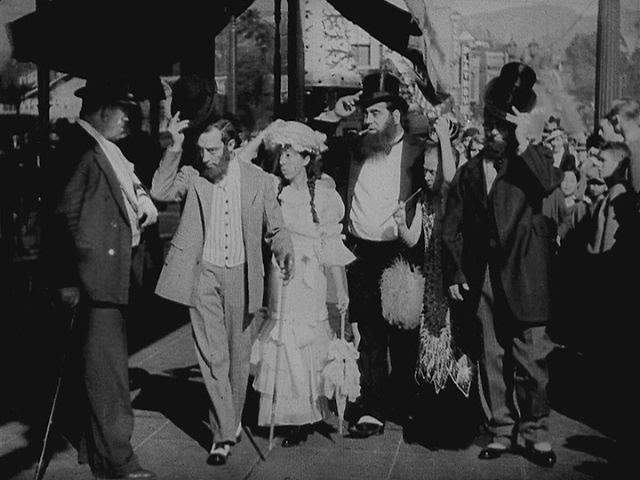 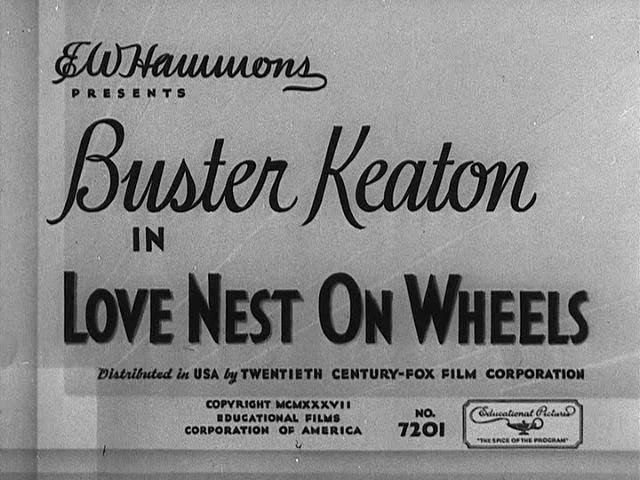 Myra, Louise and Jingles appeared as another hillbilly family in "Love Nest on Wheels." 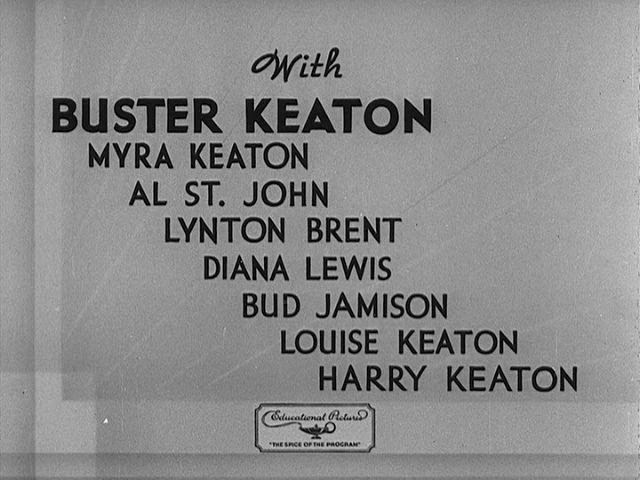 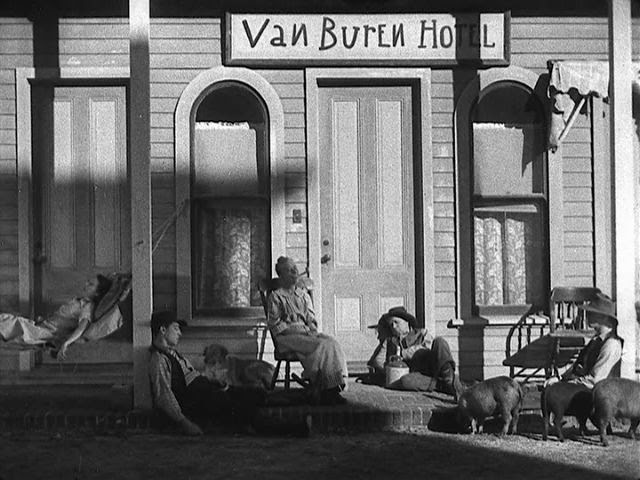 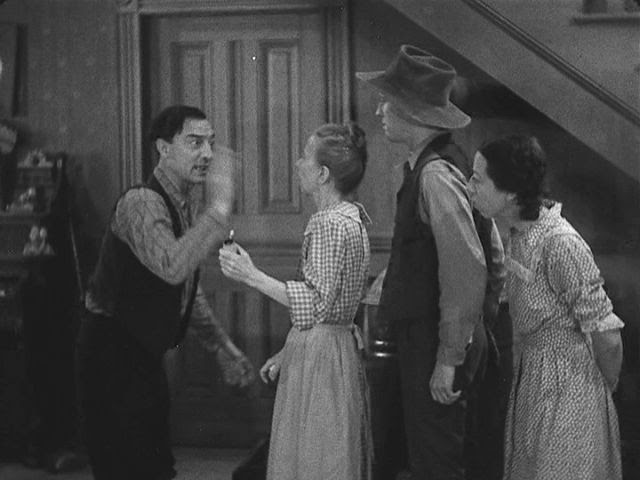 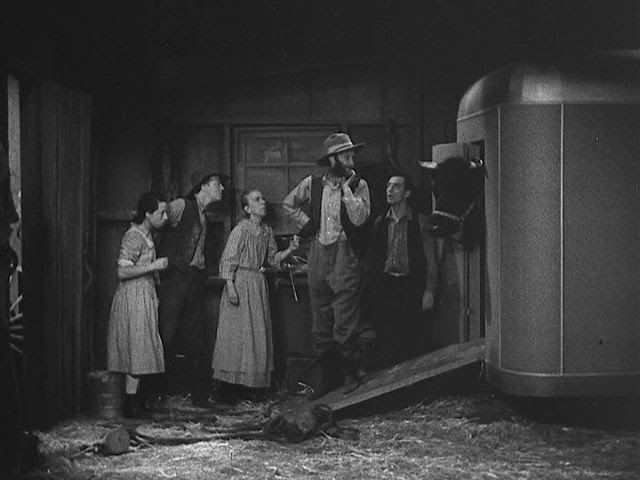 Louise, Jingles, Myra, Al St John, Buster and a cow in the love nest on wheels.  Al St John was Roscoe Arbuckle's nephew and a good friend of Buster.

This post is part of the First Annual Buster Keaton Blogathon, hosted by Lea at Silent-ology.  Thank you to Lea for all the hard work.  Thank you to everyone who visited and I encourage you to read as many posts as you can, and leave comments.  Bloggers love comments. 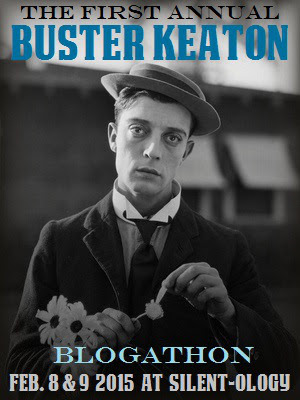