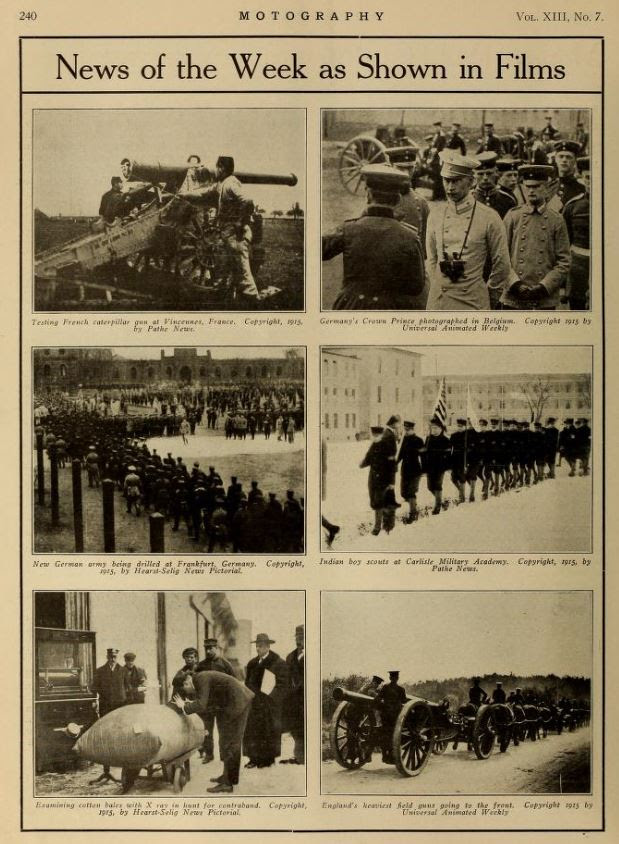 The 13-February-1915 Motography featured "News of the Week as Shown in Films," with items from current newsreels.

"Testing French caterpillar gun at Vincennes, France.  Copyright, 1915, by Pathe Daily News." The wheels of the gun carriage have feet, which should make it easier to cross muddy areas like the whole Western Front.

"Germany's Crown Prince, photographed in Belgium.  Copyright 1915 by Universal Animated Weekly." Crown Prince Wilhelm of Germany, eldest son of Kaiser Bill, was a goofy looking man who did not inspire confidence.  At the beginning of the war, he commanded the German Fifth Army, then Army Group German Crown Prince.  He did a poor job.

"New German army being drilled at Frankfurt, Germany.  Copyright 1915 by Hearst-Selig News Pictorial." Every year, a new generation of conscripts became available, along with volunteers.

"Examining cotton bales with X ray in hunt for contraband.  Copyright, 1915, by Hearst-Selig News Pictorial." I don't know where this is taking place.

"England's heaviest field guns going to the front.  Copyright 1915 by Universal Animated Weekly." I wonder if they are BL 60-pounders.
Posted by Joe Thompson at 10:00 AM