The Million Dollar Mystery was a Thanhouser production made in association with the Chicago Tribune, which ran the weekly stories in printed form. The 23-chapter serial starred Florence La Badie, a popular Thanhouser actress who died in 1917 in a car wreck. Her leading man was James Cruze, who later became a director. His most famous production was The Covered Wagon.

We saw back in November that production had stopped after the 22nd episode so that fans could submit their proposed solutions to the mystery and the winning entry would be produced:
http://bigvriotsquad.blogspot.com/2014/11/1-million-dollar-mystery-ends-november.html

"the most successful photoplay serial ever brought out." 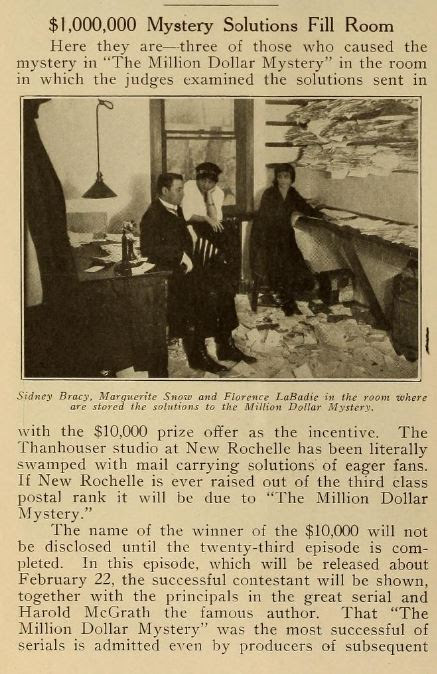 Three of the stars, Sidney Bracy, Marguerite Snow and Florence Labadie, pretend to dig through the great pile of submissions received in the mail.  The lucky winner would get $10,000 and appear in the 23rd episode.

Moving Picture World had a photo of the actual judges, Harold MacGrath, who wrote the story, May Tinee of the Chicago Tribune, and Howell Hansell of Thanhouser.

And the final episode ends in a clinch.

The final episode will announce the name of the winner and show a photo of her or him.

"The conspirators lay their plans."

"The diamond cutter works over the smuggled jewels."

"The loss of the gems is discovered."


"The jewels are  hidden away."


"The Zudora diamond mine."  Keep in mind that this was being shot during the winter in New Jersey.  These poor men must have gotten cold.


"Baird learns of the diamonds to be found in the mine."


"The conspirators force Zudora to tell what she knows of the diamonds."

"The Photoplay Serial that is Packing Houses."
Posted by Joe Thompson at 10:00 AM