"We Make Money for You -- The 'A=B=C' of Film Finance."  Note the coins flowing out of the camera lenses.

January and February, 1915 were busy times for Charlie Chaplin.  He made and released his first movies for Essanay.


A detail from the same ad announced Chaplin's first film for Essanay, "His New Job," which was an appropriate title.  Essanay usually referred to him as "Charles" rather than "Charlie."

Another detail shows that the "A=B=C" is GM (Broncho Billy) Anderson, "The face known all around the world," Francis X Bushman, "The man voted the world's most popular photoplayer," and Charles Chaplin, "The world's funniest comedian."

An article in the same issue carries on the "A=B=C" with a photo of the big three. 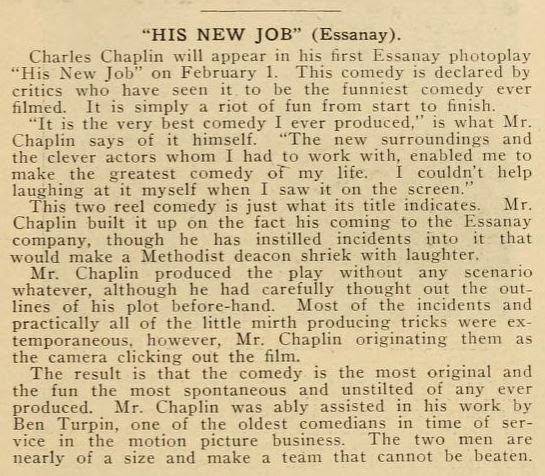 A review quotes Chaplin as saying "It is the funniest comedy I ever produced."  "Mr Chaplin was ably assisted in his work by Ben Turpin, one of the oldest comedians in time of service in the motion picture business."

Motography's review is nearly the same as the beginning of Motion Picture World's, which tells me that both originated from a press release.  "This comedy is declared by critics who have seen it..." tells me the magazine's writers had not seen the movie at that point.  This was because the February 6 issue was probably printed before the movie was released on February 1.

﻿ This two page spread features Francis X Bushman more prominently than Chaplin.  It mentions that Chaplin's next film, "One Night Out" will be released on February 11.  It was released as "A Night Out."

The next issue of Motography included an actual review of "His New Job."  "All the familiar Chaplin antics, made famous when he was with the Keystone Company, are again to be witnessed I this Essanay burlesque drama."

Another still from the film appeared with a brief summary.

Francis X Bushman's name is at the top of the page and it is larger than Chaplin's.

But Chaplin gets the facing page all to himself, with an ad that reproduces the Chicago Daily Tribune's review of "His New Job."


A small item mentions that Broncho Billy and Chaplin are both working in Niles, California.

Francis X Bushman's name is at the top of the page, but Chaplin and Ben Turpin get a photo. 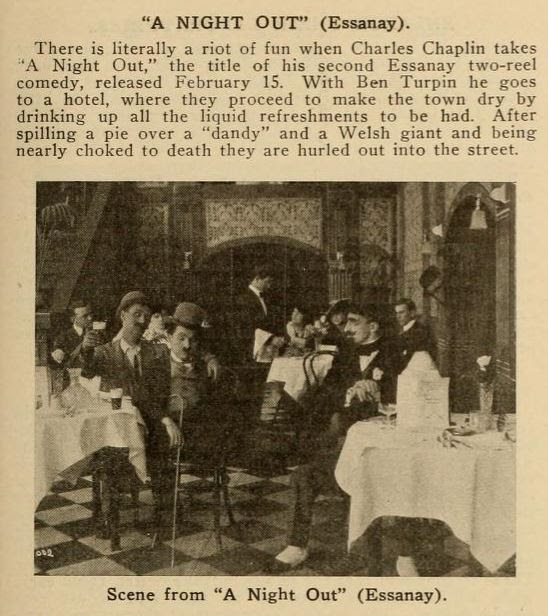 The review of Chaplin's second Essanay, "A Night Out," has a photo of Chaplin and Leo White.  Drunken Chaplin and Ben Turpin "manage to zig-zag their way up to their rooms where they are horrified by running across a woman in pajamas, with a poodle."  This was the first appearance of Edna Purviance.

This dealer offers photocards of stars.  Notice whose picture he used in the ad.

The Davis Brothers of San Francisco offered a variety of advertising items.  They also featured a photo of Chaplin.
Posted by Joe Thompson at 10:00 AM