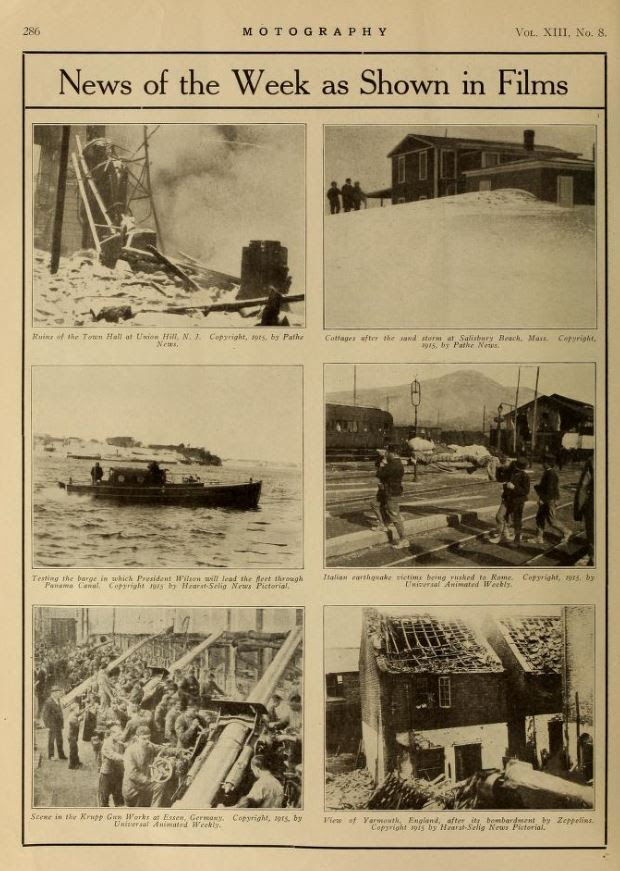 The 20-February-1915 Motography featured "News of the Week as Shown in Films," with items from current newsreels.

"Ruins of the Town Hall at Union Hill, N. J.  Copyright 1915, by Pathe News."  A fire early in the morning of 31-January-1915 damaged the business district and destroyed the town hall.

"Cottages after the sand storm at Salisbury Beach, Mass.  Copyright 1915, by Pathe News."  I haven't found anything about this event.

"Testing the barge in which President Wilson will lead the fleet through Panama Canal.  Copyright 1915 by Hearst-Selig News Pictorial."  The United States planned to have a grand international naval pageant through the canal in March, in conjunction with the Panama-Pacific International Exposition in San Francisco.

"Italian earthquake victims being rushed to Rome.  Copyright 1915 by Universal Animated Weekly."  A massive earthquake hit Italy between Rome and Naples in January, 1915.  Some people saw it as a divine warning to stay out of the war.

"Scene in the Krupp Gun Works at Essen, Germanay.  Copyright 1915 by Universal Animated Weekly."  Friedrich Krupp AG made a nice profit from the war.

"View of Yarmouth, England, after its bombardment by Zeppelins.  Copyright 1915 by Hearst-Selig News Pictorial."  This may be from 19-January-1915, the first Zeppelin attack on British soil:
http://cablecarguy.blogspot.com/2015/01/zeppelin-throws-bombs-at-sandringham.html
Posted by Joe Thompson at 10:00 AM