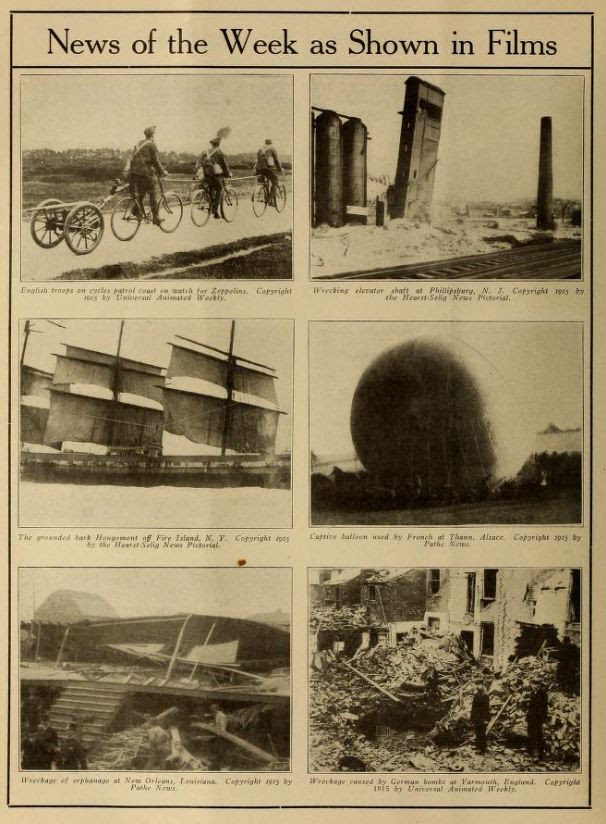 The 27-February-1915 Motography featured "News of the Week as Shown in Films," with items from current newsreels.

"English troops on cycles patrol coast on watch for Zeppelins.  Copyright 1915 by Universal Animated Weekly."  I can't tell what kind of gun they are towing.  I like the three-bicycle hitch.

"The grounded bark Hougomont off Fire Island, N. Y.  Copyright 1915 by Hearst-Selig News Pictorial."  Hougomont, a four-masted steel barque, was known as a hard-luck ship which frequently grounded and ran into other problems.  In 1932, a storm badly damaged her rig and her sunken hull now serves as a breakwater near Stenhouse Bay in Australia.

"Wreckage of orphanage at New Orleans, Louisiana.  Copyright 1915, by Pathe News." At least 20 orphans were injured when a building collapsed at the Saint Alphonsus asylum during a hurricane.

"Wreckage caused by German bombs at Yarmouth, England.  Copyright 1915 by Universal
Animated Weekly."  We saw the Hearst-Selig News Pictorial version last week.  This may be from 19-January-1915, the first Zeppelin attack on British soil:
http://cablecarguy.blogspot.com/2015/01/zeppelin-throws-bombs-at-sandringham.html