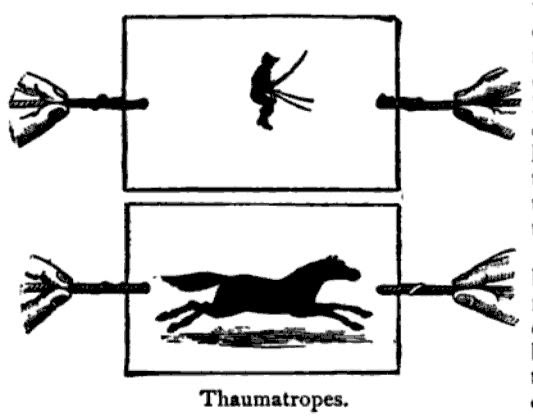 From The Young Folk's Cyclopædia of Games and Sports by John Denison Champlin and Arthur Elmore Bostwick, 1890. Several times when I was young I took a book out of the Anza Branch Library that explained how movies work.  I can't remember the title.  I tried to make several of the devices in the section on early moving picture devices.  The Thaumatrope was easy.


THAUMATROPE. A toy consisting of a square or a disk of pasteboard having pictures on both sides. The disk has strings, by which it can be twirled so rapidly that the eye can see the pictures on both sides at once. This is possible because the image of anything seen remains in the eye about one-eighth of a second, and as it does not take so long as that for the disk to turn around, the images of both sides are in the eye at the same time. Parts of a figure may be represented on one side of the disk and the rest on the other in such a way that when the disk is twirled the figure is seen complete. Thus, the man in the illustration will appear to be riding the horse.
Drawing Thaumatrope Figures. The simplest figures to draw are those whose parts do not have to fit together very exactly. For instance, a cage may be drawn on one side and a bird on the other, and when the disk is twirled the bird will appear in the cage, but its position does not matter much. The figure on the opposite side of the disk from the spectator must be upside down, so that when it turns over to his own side it will be upright. In the case of parts of figures which must fit together exactly more care is required, as for instance when some of a man's limbs are drawn on one side of the disk and the rest on the other. The required figure should be selected from a book, or drawn entire on a sheet of paper, and then the parts to be drawn on each side of the disk must be traced on separate pieces of tracing paper.
Two straight lines, A B and C D, must be drawn across the picture, and their traces lightly penciled across both the partial drawings. One of the partial drawings is now pasted on one side of a piece of pasteboard and pinholes are pricked through it at A, B, C, and D, or points near them on the lines ; the other partial drawing must be pasted on the other side of the pasteboard upside down, but so that the lines A B and C D join the pinholes made from the other side.  Thus the two partial pictures will exactly correspond in position. The pasteboard is now cut into any convenient shape —a disk is best, but not necessary— and the figures may be painted or details added to suit the maker. It is best to put only outlines on the tracing paper, so that the work will not be wasted if a mistake is made in pasting. The middle strings must be fastened at the ends of the line A B, and the others, if there are more than one, at equal distances above and below, so that the card will twirl about this line; otherwise the figures will not blend correctly. It does not matter how the lines A B and C D are drawn in the first place so long as they cross, but their position must be traced exactly on the partial drawings.
Many comical effects can be produced by the Thaumatrope. A man may be drawn on one side and a bottle on the other so that the man will appear to be drinking when the disk is twirled. In the same way can be shown a house, and the same house in flames; a sleeping man, and the same man attacked by rats, and countless other designs. If the axis on which the card twirls is changed a little, the position of the figures changes. This can be effected by using two strings only on each side, and having one of these on one side made of stiff elastic.  When the string is pulled the axis of the card will change, and with it the relation of the figures.  Thus, in the case of the man drinking, the hand may appear slightly raised at first, and, on tightening the string, may be visibly lifted to the mouth.