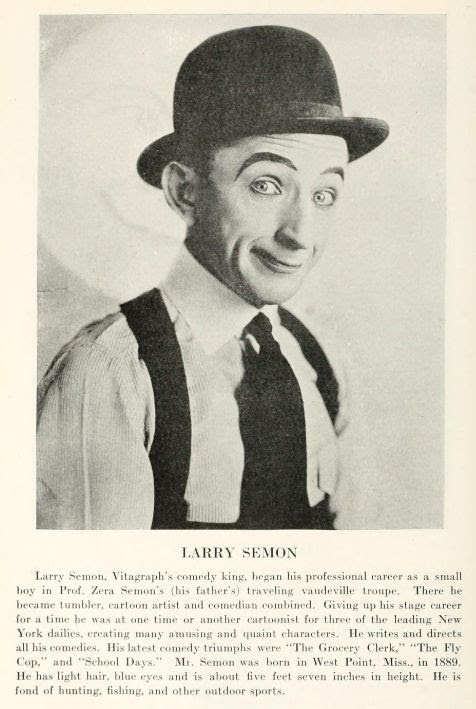 Larry Semon's father was a magician, Zera the Great.  Larry grew up touring the South with his father's act.  Larry became a newspaper cartoonist and performed on stage.  He joined the Vitagraph Company of America as a writer, director and player of small parts.  Over time, he became a lead comic in movies with the Big V Riot Squad and others.  He was a major slapstick star in the late teens and early 20s, playing a weird-looking character.  He directed his own movies and became more and more extravagant, running up huge costs for elaborate special effects.  He parted with Vitagraph and tried to go into features.  The only one I have seen is The Wizard of Oz, where he played the Scarecrow.  Oliver Hardy played the Tin Man.  Semon's wife Dorothy Dwan played Dorothy.  The movie was not a success and Semon lost a lot of money.  Semon went back to making shorts for Educational release.   He appeared as a character actor in some serious features like Josef Von Sternberg's Underworld.  Semon died in 1928.

His movies are still popular in Italy, where he is known as Ridolini.

The image is Semon's entry in the 1920 edition of Who's Who on the Screen.  It calls him "Larry Semon, Vitagraph's comedy king."
Posted by Joe Thompson at 10:00 AM