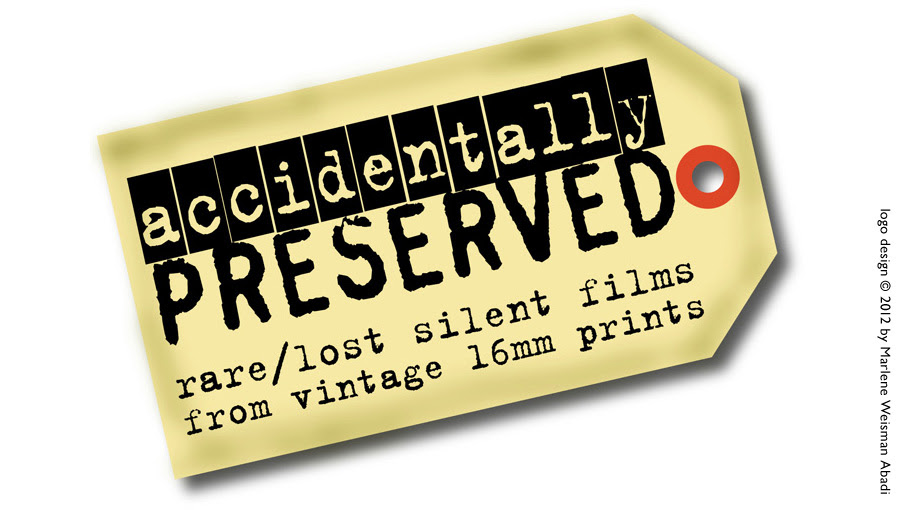 One of my Christmas presents was Accidentally Preserved, a DVD made by famous film accompanist Ben Model.  He dug into his collection of old 16mm prints, which were mostly made for the home rental or purchase market.  Some of the movies only exist in old Kodascope prints.  Naturally he also created the musical scores.  He got the funding for the project through Kickstarter.

The DVD contains nine short films, eight one-reel comedies and one promotional film, plus one bonus comedy clip.  Three of the comedies are Cameos, released by Educational.

"The Lost Laugh" stars Wallace Lupino, Lupino Lane's brother.  I don't know why he periodically burst into laughter after falling down or getting burned.  Monte Collins played an obnoxious washing machine salesman.

"Loose Change" stars Jack Duffy as a tight Scotsman and Neal Burns as his nephew.  It was produced by Al Christie.

"Wedding Slips" starred Monte Collins as a newlywed speeding around the countryside with his wife Lucille Hutton.  There are gypsies and a gorilla.  It was directed by Jules White.

"The House of Wonders" was a two-reel promotional film for Elgin Watches.  It would be very interesting for people who like watches.

"The Misfit" was made as a two-reeler, but it only survives in a one-reel version.  Clyde Cook joins the Marines to get away from his harridan wife.  It includes many of the standard service comedy marching jokes.

"Mechanical Doll" was a Fleischer Out of the Inkwell comedy.  Koko had a nice journey though the city, running along telephone wires.  He had more closeups than I remember seeing in silent cartoons.

"Cheer Up" starred Cliff Bowes, who I had never seen before.  Virginia Vance had to choose between two suitors.  It was directed by Jack White.

I liked the fact that some of the prints were scratchy.  I miss that.

Accidentally Preserved 2 came out this month.  I hope to order it soon.

I also ordered a book by Steve Massa that collects all the notes from the films on the two Accidentally Preserved sets.  It is printed in a size that fits nicely in the DVD case.

The Accidentally Preserved website: http://www.accidentallypreserved.com/
Posted by Joe Thompson at 10:00 AM