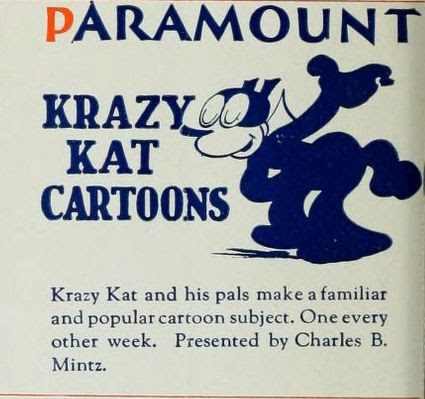 When I was a kid, a local television station would show Krazy Kat cartoons, which had been made in the 1960s.  Krazy Kat was female.  I found this confusing a few years later when I started reading books with old comic strips.  George Herriman always referred to the Kat as "he."  I didn't see earlier animated versions until much later.  They tended to completely ignore Herriman's style, especially with their backgrounds.

This ad, from the 11-May-1927 Film Daily was for a series released by Paramount, through Charles B Mintz, who is famous today for taking Oswald the Lucky Rabbit away from Walt Disney.  Animator Bill Nolan's Krazy Kat was an imitation of Felix the Cat.  Nolan had worked at Pat Sullivan's studio, where Felix was produced.
Posted by Joe Thompson at 10:00 AM