Picturing the Stirring Days of Early California with Historic Fidelity -- May 30, 2015


George Middleton, a San Francisco automobile dealer, married the beautiful and celebrated prima donna (that's how she was billed), musical comedy actress Beatriz Michelena in San Francisco in 1907. She left the stage for a while, then returned in 1910. In 1912, Middleton, son of a famous family in the lumber business, founded the California Motion Picture Company in San Rafael, north of San Francisco. At first he made promotional films for his auto business, but in 1914 he began to produce dramatic features starring his wife. Salomy Jane still survives and is very impressive. Most of the CMPC movies were destroyed in a fire.

The ad above touts the company's movies, like The Lily of Poverty Flat and Salomy Jane, which were based on stories by Bret Harte.  Harte wrote many stories, poems and novels about Gold Rush era California.

Scenes from The Lily of Poverty Flat were shot in Boulder Creek, near Santa Cruz. 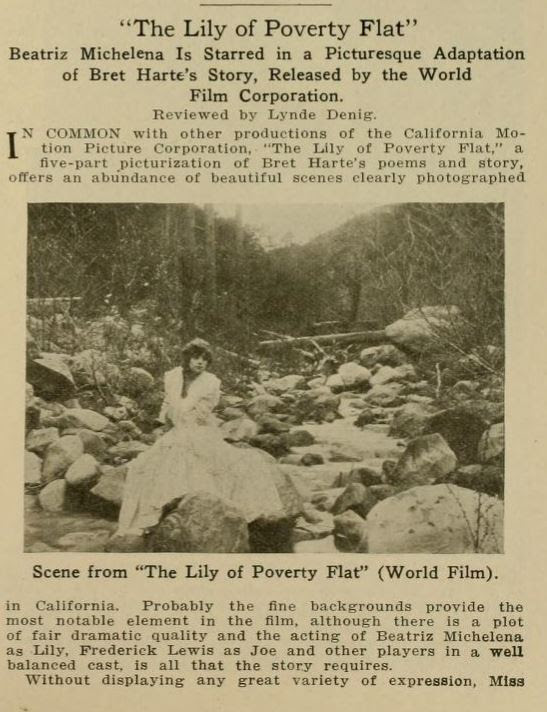 The review praises the scenery and criticizes the leading lady.  "Miss Michelena always appears attractive on the screen and she might further enhance her natural good looks by a more judicious use of make-up.  In nearly all of the scenes in this picture her lips are far too heavily rouged, a mistake made particularly obvious by close-ups."

"Picturing the stirring days of early California with historic fidelity."


A Phyllis of the Sierras was CMPC's third movie based on a Bret Harte story or poem.  In Greek mythology, Phyllis was the daughter of a Thracian king.  She married a Greek king who returned to Greece, leaving her behind. 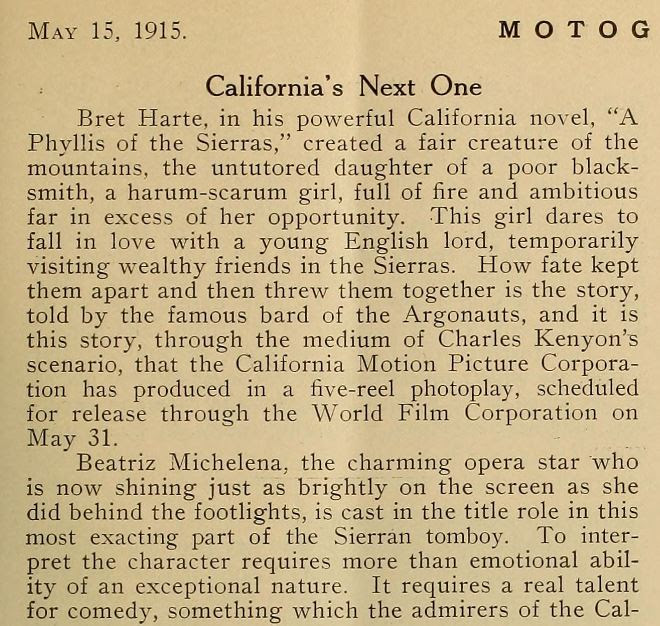 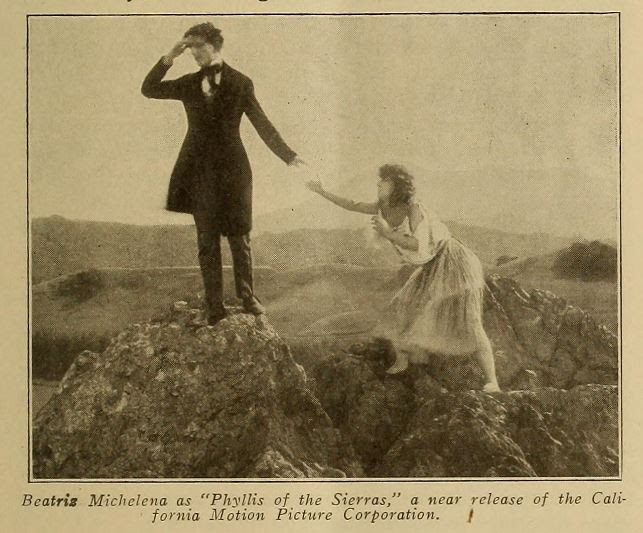 "Beatriz Michelena, the charming opera star who is now shining just as brightly on the screen as she did behind the footlights, is cast in the title role in this most exacting part of the Sierran tomboy  To interpret the character requires more than emotional ability of an exceptional nature.  It requires a real talent for comedy, something which the admirers of the California screen star have hardly suspected..."
A Phyllis of the Sierras featured beautiful interiors and exteriors, shot in Boulder Creek, near Santa Cruz.