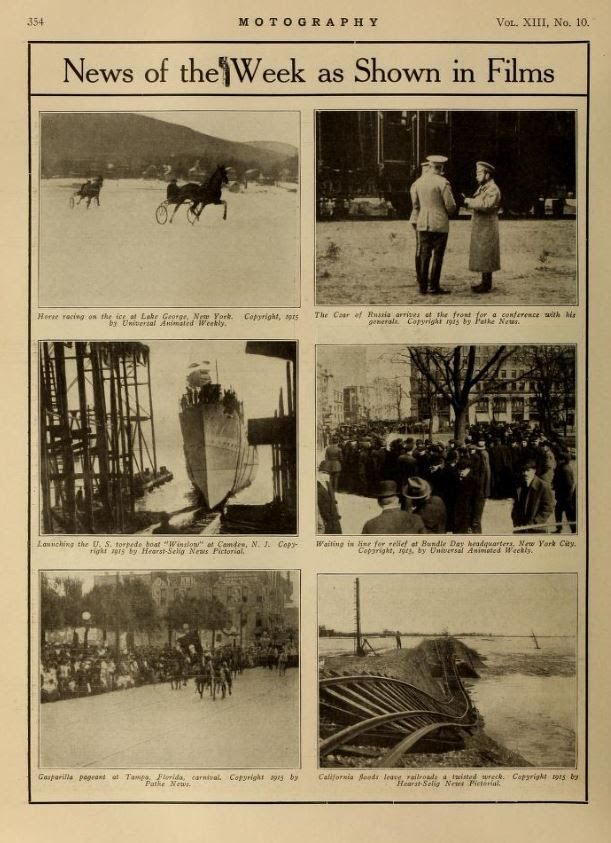 The 06-March-1915 Motography featured "News of the Week as Shown in Films," with items from current newsreels.

"The Czar of Russia arrives at the front for a conference with his generals.  Copyright 1915, by Pathe News."  Russia spent much of the winter of 1914-1915 fighting the Austro-Hungarian armies in the Carpathians.

"Launching the torpedo boat 'Winslow' at Camden, N. J.  Copyright 1915 by Hearst-Selig News Pictorial."  USS Winslow, DD-53, was a destroyer launched at William Cramp and Sons in Philadelphia.  She served during World War One.

"Waiting in line for relief at Bundle Day headquarters, New York City.  Copyright 1915, by Universal Animated Weekly."  Bundle Day was a used clothing drive organized by the city and private donors.  People were encouraged to donate old clothes, which would be cleaned and repaired before being distributed to the needy.

"Gasparilla pageant at Tampa Florida, carnival.  Copyright 1915, by Pathe News."  Gasparilla is a festival that has been held in Tampa since 1904.  It is named after the pirate José Gaspar.

"California floods leave railroads a twisted wreck.  Copyright 1915 by Hearst-Selig News Pictorial."  California has some bad floods during the winter.