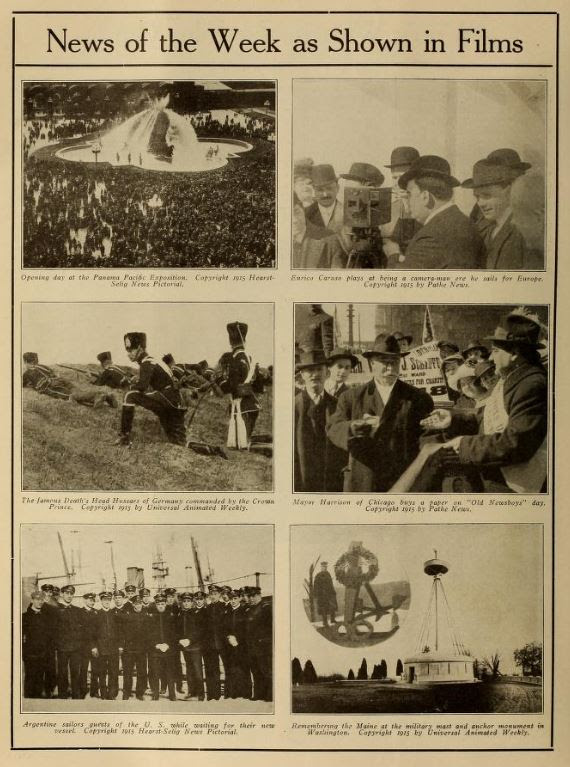 The 13-March-1915 Motography featured "News of the Week as Shown in Films," with items from current newsreels.

"Enrico Caruso plays at being a camera-man ere he sails for Europe.  Copy 1915 by Pathe News."  Tenor Enrico Caruso is considered the greatest opera singer of all time.  My grandfather revered him.

"The famous Death's Head Hussars of Germany commanded by the Crown Prince.  Copyright 1915 by Universal Animated Weekly."  A regiment of Prussian hussars had worn the death's head since the time of Frederick the Great.

"Argentine sailors guests of the U. S. while waiting for their new vessel.  Copyright 1915 Hearst-Selig News Pictorial."  Dreadnaughts Rivadavia and Moreno were built by the Fore River Shipyard in Massachusetts for the Argentine Navy during the South American dreadnaught race.

"Remembering the Maine at the military mast and anchor monument in Washington.  Copyright 1915 by Universal Animated Weekly."  The sinking of the armored cruiser USS Maine in Havana harbor on 15-February-1898 helped to trigger the Spanish-American War.  Maine's military mast stands as part of a monument at Arlington National Cemetery.
Posted by Joe Thompson at 10:00 AM