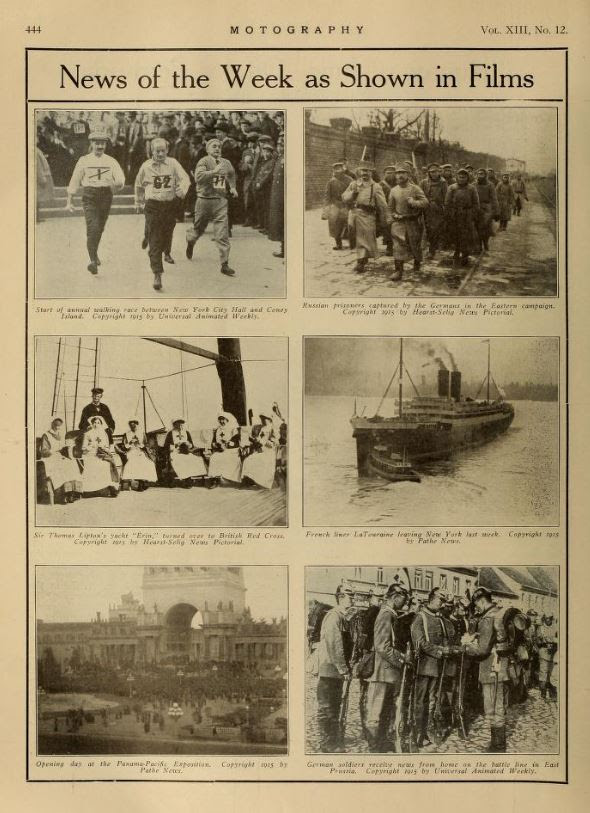 The 20-March-1915 Motography featured "News of the Week as Shown in Films," with items from current newsreels.

"Start of annual walking race between New York City Hall and Coney Island.  Copyright 1915 by Universal Animated Weekly."  The Coney Island Handicap Racewalk has been going on since 1911.  Now it all takes place in Coney Island.  The race took place on 22-February-1915.  Panos Anthony of the Greek American Athletic Club won that day.  That may be him wearing number one.

"Russian prisoners captured by the Germans in the Eastern campaign.  Copyright 1915 Hearst-Selig News Pictorial."  Russia invaded East Prussia early in the war to relieve pressure on its allies.  The Germans stopped them and took many prisoners.

"Sir Thomas Lipton's yacht 'Erin,' turned over to the British Red Cross.  Copyright 1915 Hearst-Selig News Pictorial."  British yachtsman Sir Thomas Lipton, founder of the tea company, tried to win the America's Cup five times between 1899 and 1930, always with a boat named Shamrock.  He never won, but he was widely respected for his sportsmanship.  Erin was his personal yacht.
http://cablecarguy.blogspot.com/2013/09/sir-thomas-lipton-again-fails-to-lift.html

"Opening day at the Panama Pacific Exposition.  Copyright 1915 by Pathe News."  We saw the Hearst-Selig News Pictorial version of this last week.  The Panama-Pacific International Exposition opened in San Francisco on 20-February-1915.:
http://cablecarguy.blogspot.com/2015/02/worlds-fair-opened-today-february-19.html

"German soldiers receive news from home on the battle line in East Prussia.  Copyright 1915 by Universal Animated Weekly."  At this stage in the war, German soldiers still wore the boiled leather pickelhaube.
Posted by Joe Thompson at 10:00 AM