This post is part of  the Russia in Classic Film Blogathon, hosted by Fritzi at Movies Silently.  Congratulations to Fritzi for getting this blogathon sponsored by Flicker Alley's The House of Mystery.  Flicker Alley was kind enough to provide a screening copy of this movie.

My first  post for the blogathon was about the 1912 film "Departure of a Grand Old Man."

Be sure to click on most images to see larger versions.

I grew up in San Francisco's Richmond District, a neighborhood with a large Russian-American population.  Looking out my parents' back window, I could see the Russian Orthodox Holy Virgin Cathedral.  Many of my friends went there after school for Russian lessons.

Many of my friends' grandparents had fled the Russian Revolution.  Some came directly to San Francisco, some went to Manchuria, and others went to Shanghai.  The ones in Manchuria and Shanghai left when the Japanese invaded or the Chinese Communists took over.  They and their families were often proud of Russia's accomplishments in the Great Patriotic War (World War II to us), space exploration, and the arts, but they did not generally have a sense of humor about Communism.  This is unfortunate because most Russian people I have known have had wonderful senses of humor.

When I was young, we didn't see many Russian or Soviet movies.  I didn't see a pre-Revolution movie until we saw Vladislav Starevich's "The Ant and the Grasshoper" in a college film class. I first saw Battleship Potemkin on a public television station.  Then I saw it several times in film classes and theaters.   Later I saw lots of Eisenstein, Strike, Ten Days that Shook the World, Alexander Nevsky, the first two parts of Ivan the Terrible.  I didn't see many other Soviet movies until DVDs, TCM and YouTube came along.

I was happy to get the opportunity to see Miss Mend, a 1926 Soviet movie serial, released by Flicker Alley in a two-DVD set.  The print is beautiful.  The score by Robert Isreal is emotionally moving.  The extras, a documentary on the making of the movie and another on the recording of the score, helped me to understand the movie much better.

1926 was a time of transition in the Soviet Union.  Lenin had died in 1924.  Stalin had not yet consolidated his power.  Lenin's New Economic Policy continued.  The government encouraged foreign investments and the importation of foreign experts, technology and methods.

In the film industry, movies like Eisenstein's and Potemkin and Pudovkin's Mother were great critical successes at home and abroad, but Soviet audiences voted with their rubles and their feet for exciting, slick American movies like The Thief of Baghdad with Douglas Fairbanks.

Miss Mend, based on satirical novels written by Marietta Shaginyan, using the pen name Jim Dollar, was an attempt to outdo American movies for excitement and spectacle.    The film was directed by Fedor Ozep and Boris Barnet, who had been students of pioneering film theorist Lev Kuleshov.  Kuleshov had the idea that moving picture actors should move.  He encouraged athleticism, which worked well for Barnet, a boxer who also starred in Miss Mend.

The structure of the serial reminded me more of the French serials of Louis Feuillade, who made Fantômas and in Les Vampires than of American serials because each of the three episodes was the length of a short feature.

Our heroine, Miss Vivian Mend, is played by Natalya Glan.  Miss Mend had the spunk and fire of serial queens Pearl White or Ruth Roland, and was just as able to join the action, but did not get many opportunities.  Early in the film, she leaps out of the window of her office to stop a cop who is beating a striker.  She runs from the police, which leads the first of many chases in the movie.  After that, she spends much of her time waiting for the heroes to find her nephew or the man upon whom she wants revenge.  The men who meet her fall in love with her.  This later has unfortunate consequences.

Since this is a Soviet film, we don't have a single hero, we have a collective hero.  Barnet, played by co-director Boris Barnet, is a muckraking reporter.  Vogel, a news photographer, was played by Vladimir Fogel.  Barnet and Vogel were roommates with clerk Tom Hopkins, played by comedian Igor Ilyinsky.  Barnet is very handsome.  Vogel wears glasses and has a melancholy nature.  Barnet and Fogel were both students of Kuleshov.

Igor Ilyinsky, who played comic relief Tom Hopkins, was a popular film comedian who was apparently compared to Chaplin.  Reading comments on Miss Mend, I have seen him likened to Roscoe Arbuckle and Oliver Hardy.  I'll join the party and say he reminds me of Lloyd Hamilton, a big guy with a delicate walk and mannerisms.  In any event, he is funny.

When Miss Mend jumps out of the window, Hopkins, who works with her, jumps out, too and tries to help her get away from the police.  I enjoyed his use of a cane to trip them up and to nudge one into the river.  Barnet and Vogel, reporting on the strike for the Littletown Herald, see their roommate in trouble and join the chase.  Miss Mend jumps in the back of a passing auto and asks for help.  The passenger she meets is Arthur Stern, the son of the factory owner, played by Ivan Koval-Samborsky.  He gives her a false name, takes her home, and meets her little nephew, John.

My first thought was, we have the Three Musketeers, now here is d'Artagnan.  In an American movie, after meeting cute that way, Stern and Miss Mend would have overcome some misunderstandings, then gotten married.  Since this is a Soviet film, Stern degenerates into a brute and eventually tries to rape Miss Mend.

But the brutish attempted rapist Stern is not the primary villain.  The central bad guy is Cheche, played by Sergey Komarov, another student of Kuleshov.  Komarov's performance is not athletic, but he shows great body control with Cheche's stiff movements.  Cheche shows the influence of Fritz Lang's Doctor Mabuse, sitting at the center of a vast criminal conspiracy.  In fact, after little John is kidnapped by the minions of Cheche, Vogel speaks my second-favorite subtitle of the movie: 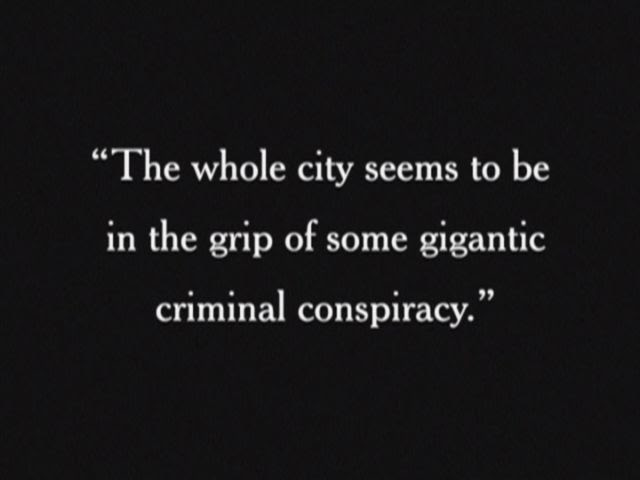 That could be the plot of several of Lang's movies.

Since this is a Soviet film, Cheche is not spreading havoc just for the hell of it or for personal greed.  He is working for or with a cabal of evil capitalists who want to destroy the Soviet Union.  Scientists working for Cheche have developed poison gas and a plague bacterium that can be spread through insulators used on radio antennae.  As with many serials, the plot doesn't always make sense.  The insulators will be installed in the Soviet Union and used in an act of bacteriological terrorism. 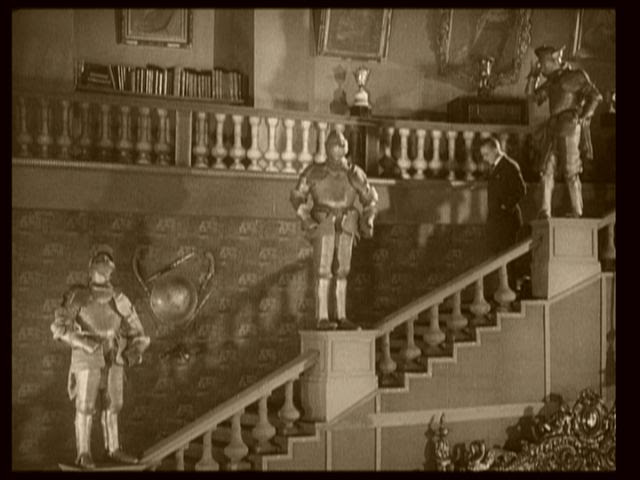 Chases include the pursuit of a motorcycle on stolen horses and the pursuit of an ocean liner by a speedboat.  Spectacle includes a well staged train wreck.  There is plenty of slapstick, including the three heroes dressing up in suits of armor to spy on Cheche and the capitalists.

When I was young, I would watch American movies set in Europe, in the Soviet Union, in Asia and in Africa and I often wondered how they looked to people from those places.  I don't remember seeing any movies from those places set in America.  Miss Mend makes some effort to represent America.  Most of the signs are in English.  Things like inscriptions on photos are in English.  Many things like letters are in Russian.  I can't find it in my notes, but I think I remember seeing one letter in English with a PS in Russian.  The first thing that told me I was not looking at America was the uniforms of the cops.  They didn't look American.  That and the peoples' teeth.

Since this is a Soviet film, there are a few shots taken at America.  The heroes pursue a sailor who has stolen a letter to a waterfront dive.  A John Ford movie breaks out and there is a huge fight.  A sailor of African descent gets shot and killed shortly before the police arrives.  Someone points out the dead sailor.  A cop says "No big deal, he's black."

The Americans pursue Cheche and Stern to America on two ships.  Since this is a Soviet film, the Americans cannot save the day.  The efficient Soviet police arrest Cheche.  That is not the end, because he bolts away and tries to escape by hanging onto the cable of an elevator.  The elevator machinery gives Cheche his comeuppance. 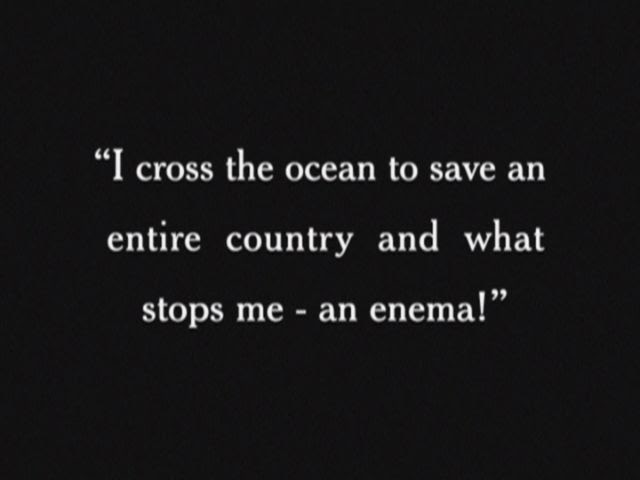 I think I can safely say that this is a unique subtitle for a movie serial.

And finally, if this blogathon has given you an urge for some Russian delicacies and if you ever find yourself in my old neighborhood, San Francisco's Richmond District, be sure to visit the Cinderella Bakery at 436 Balboa Street.  You can find piroshki or pirogi or some nice dark rye bread.  My Ukranian-Canadian-American father-in-law, whom we dearly miss, loved the place.

This post is part of  the Russia in Classic Film Blogathon, hosted by Fritzi at Movies Silently and sponsored by Flicker Alley's The House of Mystery.

My first post for the blogathon was about the 1912 film "Departure of a Grand Old Man."