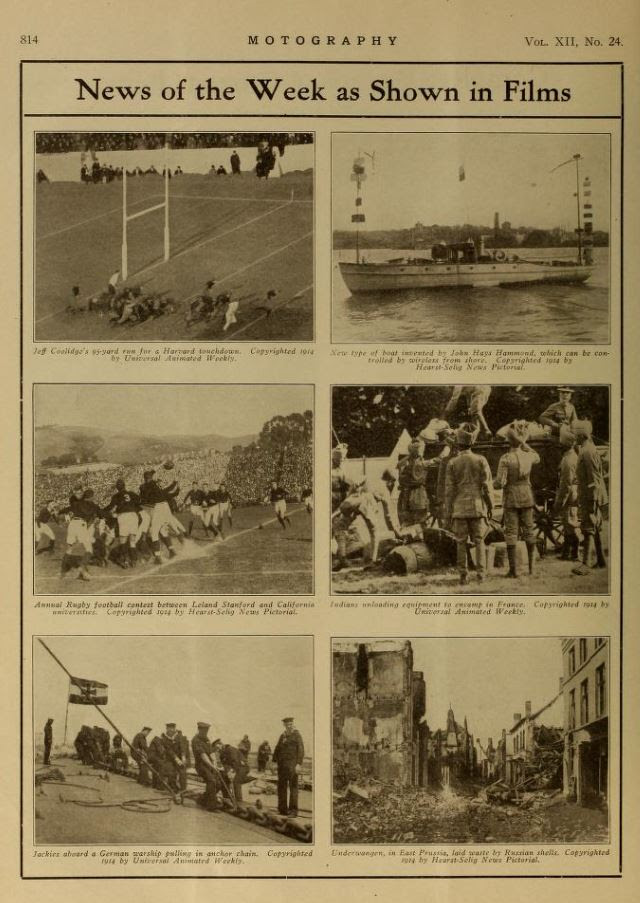 The 12-December-1914 Motography featured "News of the Week as Shown in Films," with items from current newsreels.

"Annual Rugby footbal contest between Leland Stanford and California universities.  Copyrighted 1914 by Hearst-Selig News Pictorial."  In the 1914 Big Game, Stanford beat Cal 36-8 at Stanford.  The schools played rugby from 1906-1914.  This was the last Big Game till 1919, when they started playing American football again.

"Indians unloading equipment to encamp in France.  Copyrighted 1914 by Universal Animated Weekly."  The British brought soldiers from India, but they did not do well in the European winter climate.

"Jackies aboard a German warship pulling in anchor chain.  Copyrighted 1914 by Universal Animated Weekly."  "Jackies," from Jack Tar, was a common term for sailors.

"Underwangen, in East Prussia, lasid waste by Russian shells.  Copyrighted 1914 by Hearst-Selig News Pictorial."  Early in the war, the Russians threatened East Prussia.
Posted by Joe Thompson at 10:00 AM