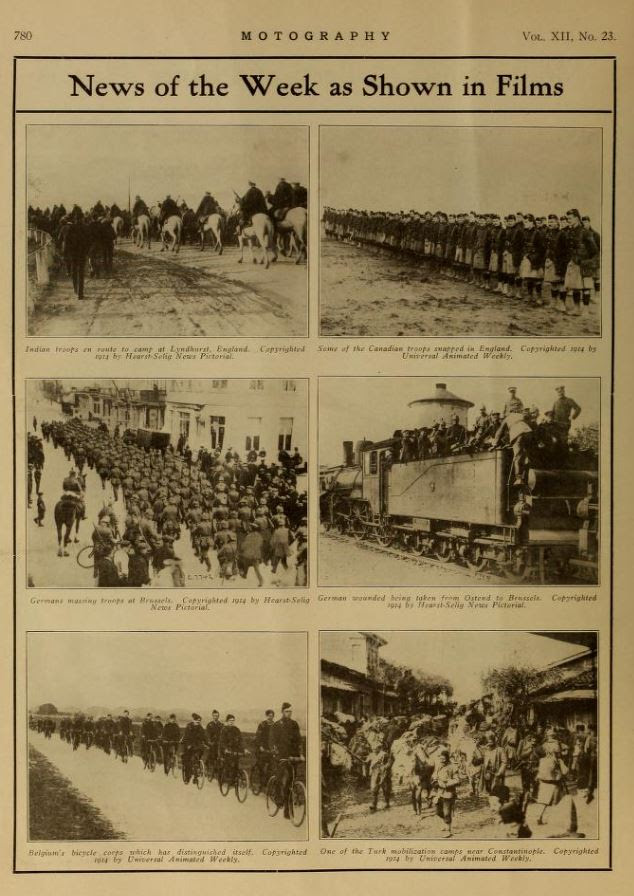 The 05-December-1914 Motography featured "News of the Week as Shown in Films," with items from current newsreels.

"Indian troops en route to camp at Lyndhurst, England.  Copyrighted 1914 by Hearst-Selig News Pictorial."  Indian cavalry did not have many opportunities to operate in Europe once the trenches were dug.  Later they served in the Middle East.  Lyndhurst, Hampshire is a town in the New Forest.

"Some of the Canadian troops snapped in England.  Copyrighted 1914 by Universal Animated Weekly."  Canada had several regiments of Highlanders.

"Germans massing troops at Brussels.  Copyrighted 1914 by Hearst-Selig News Pictorial."  The Germans trampled Belgium on their way to invade France.

"German wounded being taken from Ostend to Brussels.  Copyrighted 1914 by Hearst-Selig News Pictorial."  I'm not sure why the wounded are riding in the tender of a steam locomotive.  I can't tell if they are prisoners, but I don't think so.

"Belgium's bicycle corps which has distinguished itself.  Copyrighted 1914 by Universal Animated Weekly."  The Belgians did everything they could to resist the German invaders.  The British and German armies also had bicycle infantry.

"One of the Turk mobilization camps near Constantinople.  Copyrighted 1914 by Universal Animated Weekly."  The Ottoman Empire entered the war in 1915.
Posted by Joe Thompson at 10:00 AM