Some sources claim that Tillie's Punctured Romance is the first feature-length slapstick comedy, or even the first feature-length comedy. I don't know if that is true, but it is certainly the first one to be a big success, despite being advertised by the ALCO Film Corporation, which released the movie, with taglines like "The First Successful Picturizing of Comedy on a Whole Basis."  I wonder what that means in English.  Notice that the ad contains a photo of Charlie Chaplin dancing with star Marie Dressler, but does not mention his name.  Neither does it mention director Mack Sennett, costar Mabel Normand, nor the Keystone company which produced the film.

We saw last month that Keystone was selling states rights to the movie:
http://bigvriotsquad.blogspot.com/2014/11/tillies-punctured-romance-november-17.html


This article from the same edition of Moving Picture World says that star Marie Dressler had sued Keystone's parent company, the New York Motion Picture Corporation, to obtain control of the picture, but that her suit had been dismissed and that NYMPC had sold the picture to Alco for $100,000. 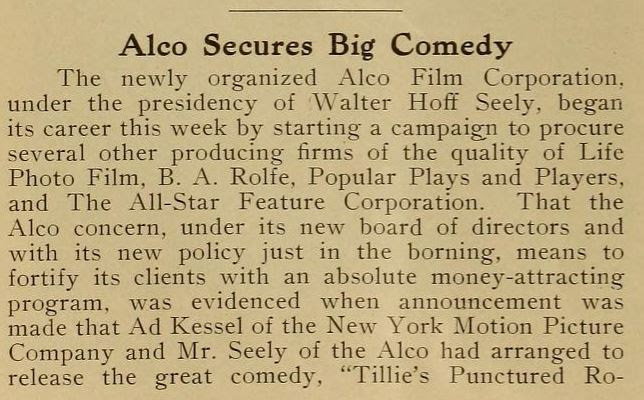 This article from Motography mentions that the "newly organized Alco Film Corporation ... had arranged to release the great comedy, 'Tillie's Punctured Romance,' with Marie Dressler as a regular unit on the Alco program."  It mentions Charlie Chaplin and director Mack Sennett.

This ad says that Armbruster and Hock (good name) has states rights for the movie in West Virginia, Virginia, North Carolina and the District of Columbia.  This ad mentions Mabel Normand and Chaplin.


This Alco ad mentions that Marie Dressler is "Supported by Charles Chaplin and Mabel Normand."

The California Motion Picture Company had trouble with Alco as its distributor:
http://bigvriotsquad.blogspot.com/search/label/California%20Motion%20Picture%20Company