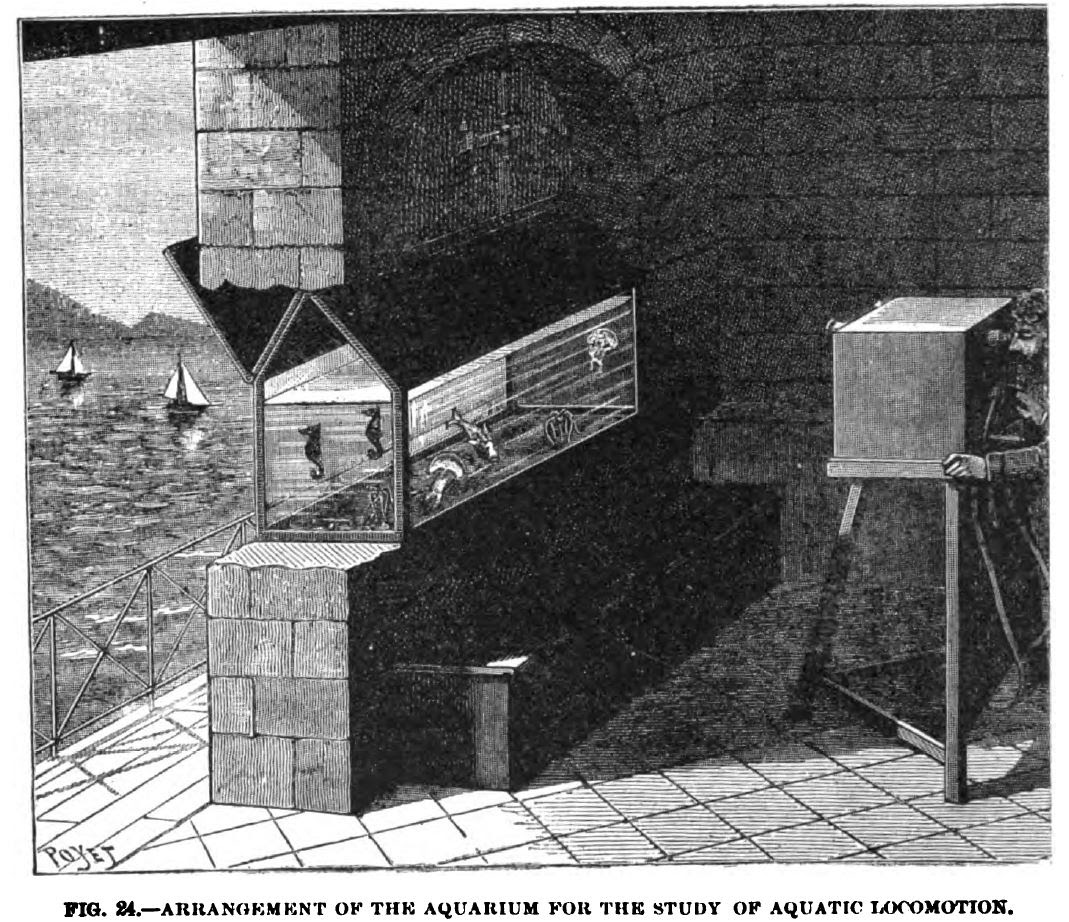 An excerpt from "Chronophotography" from Magic: Stage Illusions and Scientific Diversions, Including Trick Photography, edited by Albert Allis Hopkins.  We learned about Eadweard Muybridge in Part One:
http://bigvriotsquad.blogspot.com/2014/09/chronophotography-part-one-september-25.html

We learned about Étienne-Jules Marey and other French experimenters in Part Two:
http://bigvriotsquad.blogspot.com/2014/10/chronophotography-part-2-october-26-2014.html

I may decide to do a Part Four, about an amateur chronophotographic apparatus.

Be sure to click on the images to see larger versions.

The analysis of locomotion in water is one of the most interesting developments of chronophotography. In order to study locomotion in water it was necessary to modify the method. The animals experimented with swam in a glass-sided aquarium fitted in an aperture in a wall, as shown in our engraving. The aquarium was directly illuminated by the light of the horizon, forming a very clear field upon which the animals were outlined as silhouettes. Sometimes the external glass of the aquarium was covered by letting down an opaque shutter; then, upon opening another shutter, placed above the water, the brightly illuminated animals were seen standing out from the black field. In most cases it was found necessary to operate before the luminous ground, so it was not possible to receive several successive images upon a removable plate, but it was necessary to cause the sensitized surface to move by starts, so as to bring before the objective points which were always new for each new image that is to be formed. A flexible gelatino-bromide-of-silver film was used. The film was cut into a long and narrow strip which in the camera passed along at the focus of the objective, and unwound from a supply bobbin, and wound around a receiving one. 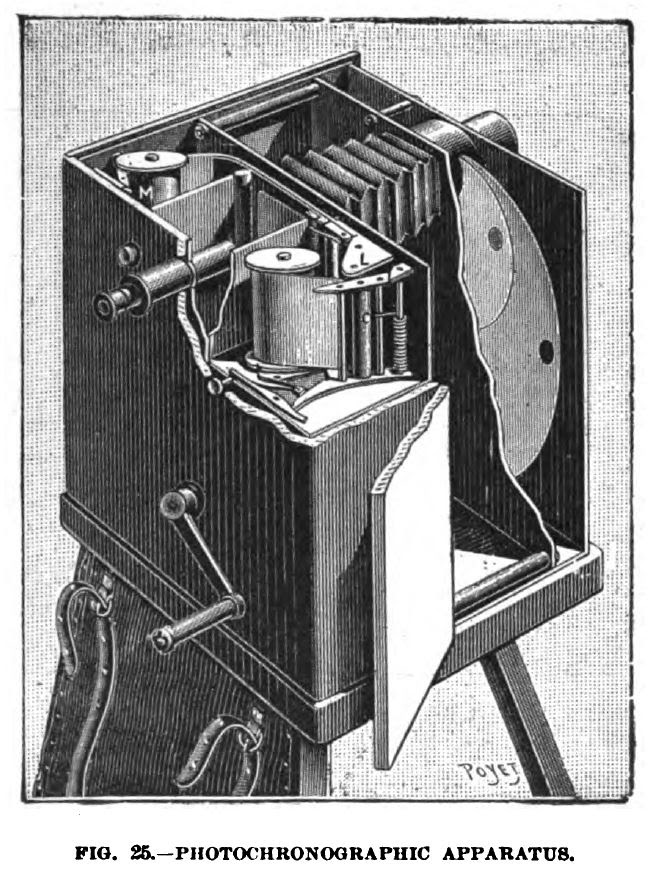 The objective turned toward the right has a slit in the center for the passage of the diaphragm which, in revolving, allows the light to pass intermittingly. When the small diaphragm makes one revolution the large one makes five revolutions, and it is then only that the apertures meet and the light passes. The bellows behind the objective allows the light to reach the sensitized film. The box is, of course, tightly closed. The focusing is done by means of a small telescope or spy glass. It is necessary at each new experiment to use a new band of film, and the substitution of rolls of films is effected in the light by means of bobbins upon which the film is rolled. 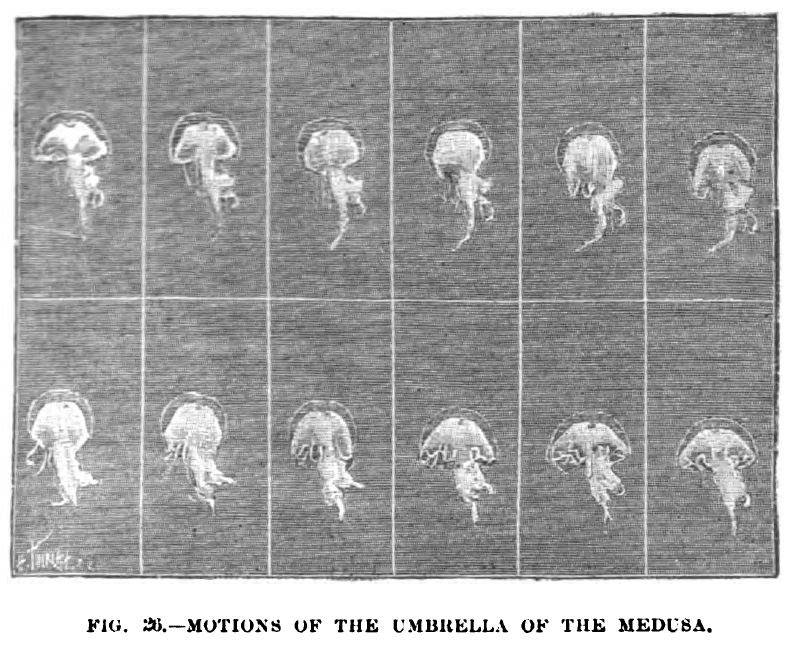 At the extremity of each band of film are glued paper bands of the same width. One of these prolongations is red and the other is black. Each of them is about twenty inches in length. Having the two colors makes it almost impossible to re-expose a film, as one is not liable to confound a bobbin which has been used with one that has not, the color of the roll being different. Special devices are employed in the camera to render the film immovable for an instant while it receives the impression from the object. Arrangements are also provided for obtaining a uniform velocity. The use of the apparatus which we have just described permitted of seeing with what a variety of means of locomotion the various kinds of aquatic animals—fishes, mollusks, crustaceans, etc.—propel themselves. The motion of the medusa is particularly interesting, and the phases of the movement of the umbrella are shown in Fig. 26. The propulsion of this mollusk is effected through the alternate contraction and dilation of its umbrella. Ten images per second were sufficient to obtain a pretty complete series of the phases of this motion. These images gain much by being examined in the zoetrope, wherein they reproduce with absolute perfection the aspect of the animal in motion.

The hippocampus, which is otherwise known as the "sea-horse," affords another interesting example of aquatic locomotion. The principal propeller of this animal is a dorsal fin which vibrates with such rapidity that it is almost invisible, and has an appearance analogous to that of the branches of a tuning fork in motion. With twenty images per second it is seen that this vibration is undulatory. We have before us the successive deviations of the lower, middle, and upper rays of the film. In the present case the undulation takes place from the bottom upwards. 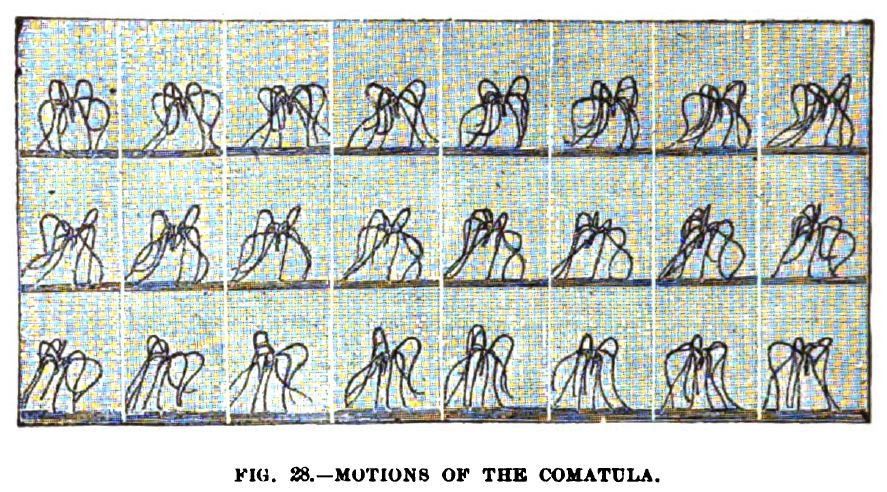 The comatula is habitually fixed to the bottom of the aquarium, just as a plant is fixed to the earth by its roots. It therefore makes nothing but vague motions of the arm, which it rolls up and unrolls; but if the animal be excited by the means of a rod, it will be observed to begin a strange motion which carries it quite a distance. In this kind of locomotion the ten arms move alternately; five of them rise and keep tightly pressed against the calyx, and the other five descend and separate from it. Upon the arms that rise, the cirri are invisible, and while upon those that descend, they diverge in order to obtain a purchase upon the water. These motions of the cirri seem passive, like those of a valve that obeys the thrust of a liquid.

M. Marey says: "I hare obtained images of a certain number of other aquatic species, the swimming of the eel, the skate, etc. These types of locomotion ought to be studied methodically, compared with each other, and considered in their relations with the conformation of the different species. It will, I hope, be a new element for the interpretation of the laws of animal morphology, which are very obscure."

M. Marey has also investigated the flight of insects by means of chronophotography. These experiments are most delicate and interesting, and the results obtained go a long way towards making up a satisfactory theory of insect life. M. Marey says that the wing in its to-and-fro movements is bent in various directions by the resistance of the air. Its action is always that of an inclined plane striking against the fluid, and utilizing that part of the resistance which is favorable to its onward progression. This mechanism is the same as that of a waterman's scull (reference of course being to "sea sculling" and not to "river sculling"), which, as it moves backward and forward, is obliquely inclined in opposite directions, each time communicating an impulse to the boat. There is, however, a difference between these two methods of propulsion. The scull used by the waterman offers a rigid resistance to the water, and the operator has to impart alternate rotary movements to the scull by his hand—at the same time taking care that the scull strikes the water at a favorable slant. The mechanism in the case of the insect's wing is far simpler. The flexible membrane which constitutes the anterior part of the wing presents a rigid border which enables the wing to incline itself at the most favorable angle. The muscles only maintain a to-and-fro movement. The resistance to the air does the rest, namely, effects those changes in surface obliquity which determine the formation of an 8-shaped trajectory by the extremity of the wing.

M. Marey states that he succeeded in obtaining a photograph of the gilded wing of an insect, which, though not absolutely at liberty, could fly at a comparatively high rate of speed. The photographs of the trajectory of the wing of an insect are very interesting. A wooden box was lined throughout with black velvet. The bottom of the box, a simple disk supported by a foot piece, was placed in position; the periphery of the space was covered with a white material, leaving between it and the central disk an annular track covered with black velvet. It was around this annular track the insect was made to fly. A needle stuck in the middle of the disk served as an axis for a revolving beam and its counterbalance. This beam consisted of a straw, and at the end of it was fixed a light pair of forceps to hold the insect. The dragon fly commenced flying around the track at a very rapid rate, drawing the straw after it. The gold spangles passing through his wings described a trajectory which was easily photographed.

The chronophotography of insects by the use of it moving film has been also accomplished by means of very ingenious apparatus. In some cases the insects were held in forceps, and in other cases they were allowed free flight in a cardboard box.

"Comparative locomotion," which is rendered possible by chronophotography, might almost be called a new science. It is, at any rate, an important adjunct to the studies of the zoologist. The researches of M. Marey upon the different terrestrial mammals, birds, tortoises, lizards, frogs, toads, tadpoles, snails, eels, fish, insects, and arachnids are of the greatest possible value and interest. The applications of chronophotography to experimental physiology are numerous. It supplements the information obtained by the graphic methods. It has rendered possible the photography of the successive phases of cardiac action in a tortoise under condition of artificial circulation. The mechanism of cardiac pulsation has also been studied by its means, as well as the determination of the centers of movements in joints.

It has been found that chronophotography could be applied not only to objects of considerable size, but to those of microscopic size as well. Special arrangements of apparatus are necessary for this purpose. By its means the retraction of the spiral stalks in vorticellas, the movement of the blood in capillary vessels, and the movements of the zoospores in the cells of conferva have been determined.

The great value of chronophotography is unquestionable for use in every case where the body whose rapid changes of position or form we wish to know is inaccessible to us, or its movements cannot be mechanically traced.

Chronophotography has been used in France for studies touching the military art, being employed for registering the firing of projectiles having a relatively slow motion, such as the explosion of stationary torpedoes, the recoil of guns, the motion of automobile torpedoes, etc. Special arrangements are provided to permit of electrically controlling the phenomenon to be photographed. The apparatus is described in detail in the " Scientific American Supplement," No. 743. 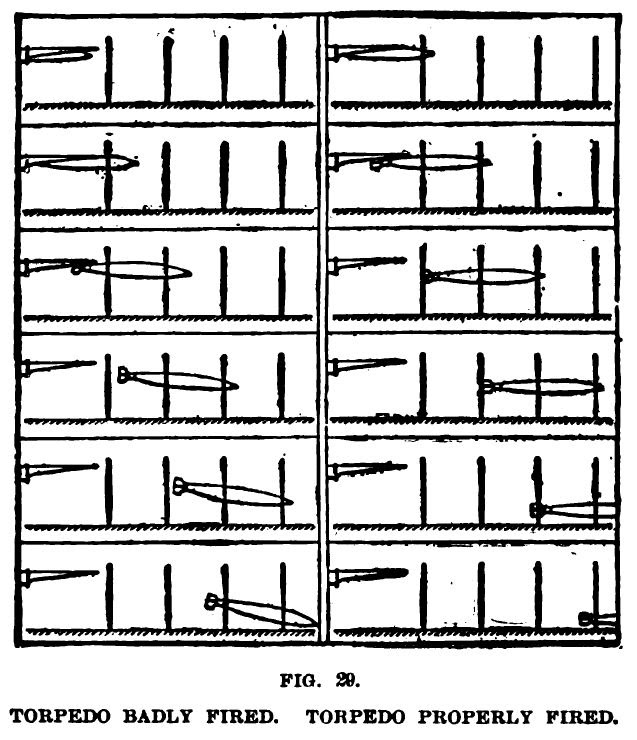 We present a diagram showing the results obtained by photographing the firing of torpedoes. Although the velocity of these projectiles is not very great, about sixty feet per second, it is yet very difficult for the eye to take exact account of what is occurring during the launching. As the net cost of a torpedo is considerable, it is essential that the conditions which influence the regularity of its submarine flight shall be known with precision. If it inclines in front more or less in plunging, the regularity of its running will be put to hazard; if, on the contrary, it falls flat upon the water, the results will be very different. Our engraving shows the torpedo starting from the tube and traversing the different panels in the field of firing. In the first half the torpedo, gradually inclining, falls point foremost; it has been badly fired. In the second series, on the contrary, the torpedo is maintaining itself horizontally, and, in a manner, moving always parallel with itself. Under such circumstances it falls flat and starts off normally and regularly to the object to be reached. This shows the great utility of chronophotography.
Posted by Joe Thompson at 10:00 AM