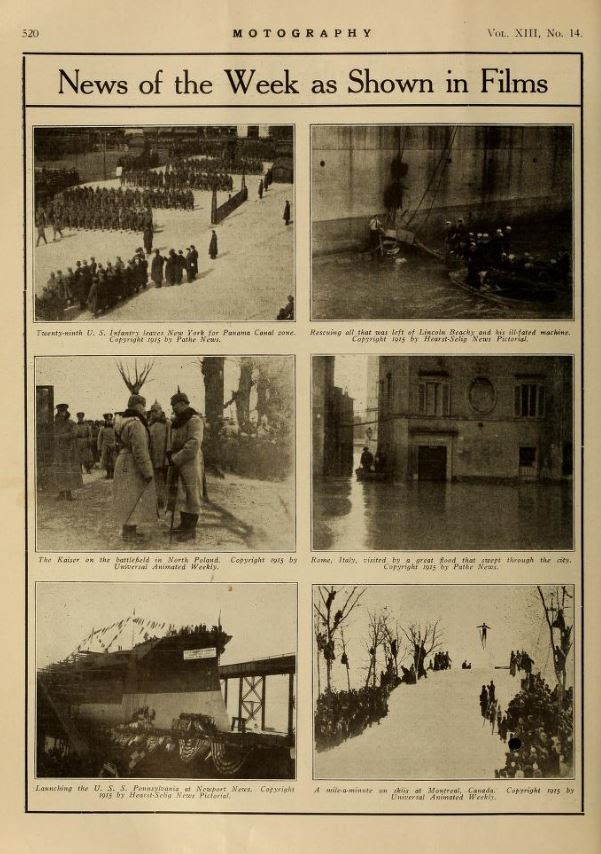 The 03-April -1915 Motography featured "News of the Week as Shown in Films," with items from current newsreels.

"Rescuing all that was left of Lincoln Beachey and his ill-fated machine.   Copyright 1915 Hearst-Selig News Pictorial."  Lincoln Beachey was the featured aerial performer at San Francisco's Panama Pacific International Exposition, where he died on 14-March-1915 when his new monoplane crashed into the bay, where he drowned, trapped in the wreckage:
http://cablecarguy.blogspot.com/2015/03/lincoln-beachey-plunges-mile-out-of-sky.html

"The Kaiser on the battlefield in North Poland.  Copyright 1915 by Universal Animated Weekly."  Kaiser Wilhelm II was visiting his troops who had driven the Russians back after they invaded East Prussia.

"Rome, Italy visited by a great flood that swept through the city.  Copyright 1915 by Pathe News."  Rome's Tiber River flooded frequently.  The flood of 1915 lasted a long time.

"Launching the U. S. S. Pennsylvania at Newport News.  Copyright 1915 Hearst-Selig News Pictorial."  Dreadnaught USS Pennsylvania (BB-38) was launched on 16-March-1915.  During the Pearl Harbor attack, she was in drydock, but her anti-aircraft guns fought back.  15 of her crew were killed, but she was able to sail to San Francisco for repairs.

"A mile-a-minute on skiis at Montreal, Canada.  Copyright 1915 by Universal Animated Weekly."  I assume this is a ski jump competition.
Posted by Joe Thompson at 10:00 AM