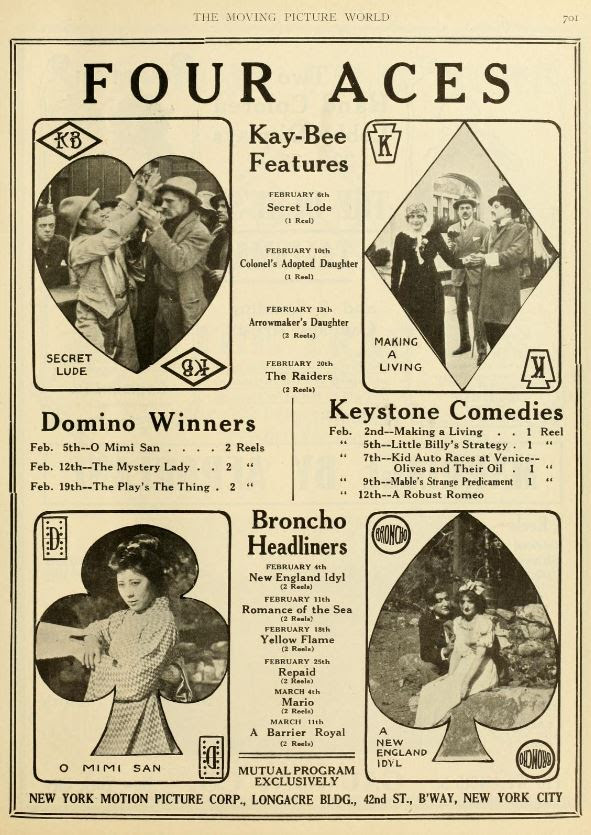 100 years ago today, 02-February-1914, Mack Sennett's Keystone released Charlie Chaplin's first movie, "Making a Living."  The ad is from the 07-February-1914 Moving Picture World.  Click on the image to see a larger version.  In the upper right-hand diamond, the lady on the left is Emma Clifton, the man in the center is director Henry "Pathé" Lehrman, and Chaplin is on the right.  Chaplin had not yet created his tramp costume.  Chaplin and Lehrman did not get along.  Lehrman would soon leave Sennett to direct comedies at Universal.  Note that upcoming releases included "Kid Auto Races at Venice," a split reel, and "Mabel's Strange Predicament."  Notice that Mabel Normand's name is spelled wrong in the title.  Chaplin created the tramp costume for "Mabel's Strange Predicament," But "Kid Auto Races at Venice" was released first.

The same issue of Moving Picture World carried a review of "Making a Living."  "The clever player who takes the role of nervy and very nifty sharper in this picture is a comedian of the first water, who acts like one of Nature's own naturals."
Posted by Joe Thompson at 12:30 AM