Chaplin had just signed a million dollar contract with First National "for only 8 comedies."

Chaplin fought with producers who tried to make pseudo-Chaplin films.  "Charlie Chaplin in A Son of the Gods" must have been making fun of the Annette Kellerman movie A Daughter of the Gods.  This item particularly mentions the Apollo Feature Film Corporation. 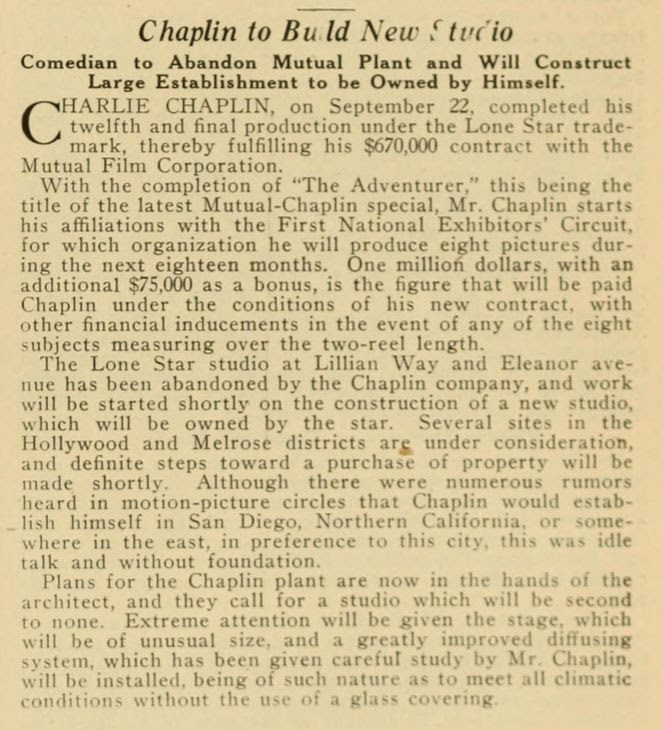 Chaplin left the Lone Star studio where he filmed the Mutuals and planned to build his own new studio.

Chaplin decided to put his signature on titles and promotional items to let people know that the First Nationals would be new movies and not re-releases.  "It is hoped that this innovation will go far toward safeguarding the unsuspecting public from the annoyance of paying their money at the box office to see a new Chaplin film, only to find when inside the theater that the promised treat is an old release -- an imitation or a garbled revue."

Apollo Pictures argued that they were not the producers of imitation Chaplin, but the Apollo Film Company was.

Before he left for a vacation in Hawaii, Chaplin organized the team that would make his films for First National.

Essanay began a program of re-releasing a Chaplin film each month.  "A Jitney Elopement" was partly shot in San Francisco's Golden Gate Park.

"The Champion" had already been re-released successfully.