Meanwhile, back at Essanay, partner George Spoor was looking for a comedian to take Charlie Chaplin's place.  He signed international star Max Linder.  Linder had appeared in early Pathé slapstick comedies in France. He became a major star before World War One.  There is some confusion about what he did in the war, but he was wounded or became seriously ill and newspapers reported that he had died.  This was not true, but the French film industry, the most powerful in the world before the war, had mostly shut down.  Max took the offer from Essanay and came to America, signing a deal to make six short films.  The first two did poorly and the third did only a little better, so that was the end of the series.

Max's first Essanay film, "Max Comes Across" was in the can and he was working on the story for his second, "Max Wants a Divorce."

"Essanay will pay half of your newspaper advertising on Max Linder Comedies."  That was an unusual offer.

The New York Roof was the former roof garden on the roof of Loew's New York Theatre. Marcus Lowe had converted it to a movie theater in 1915. 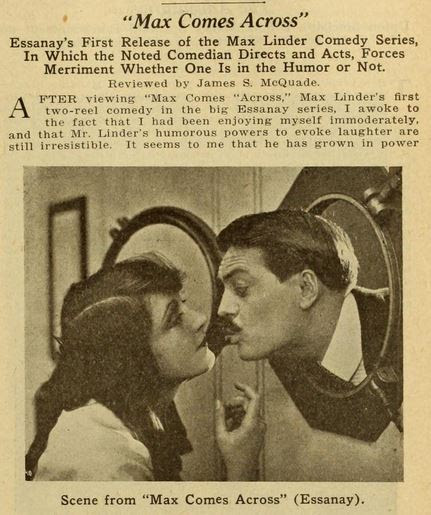 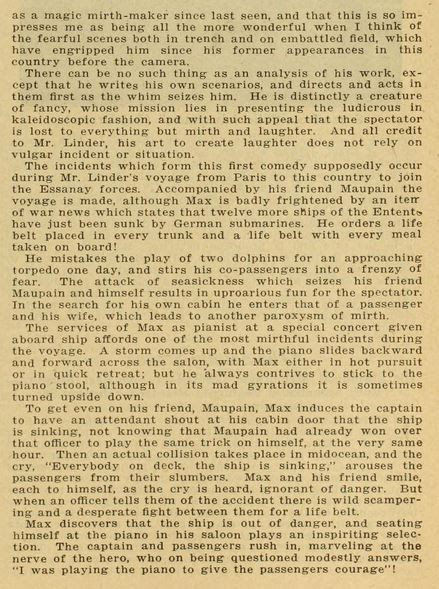 "Max Comes Across" got a good review from James S McQuade in Moving Picture World.  Max worries that the ocean liner he sails on will be torpedoed.  This is contemporary humor.