By January, 1917, Charlie Chaplin was half way through his Mutual films, one of the greatest series of silent short comedies.  I first saw "The Rink" on a local PBS station.  I think they showed it because rollerskating was a big thing in the late 1970s.


"When Charlie Chaplin signed the famous $670,000 contract with the Mutual Film Corporation, he was generally conceded to be the world's greatest comedian.  In the months that have passed since that time, he has not only preserved that reputation but added to it."

While working on "Easy Street," Chaplin was injured when he pulled down a lamp post to gas bully Eric Campbell.

Scandanvian rights sold for $18,500.  The war put limitations on overseas sales, but the Scandanavian countries were neutral.

The blue-nosed reviewer says that when John Bunny was performing, there was no vulgarity in film comedy.  "Unfortunately at the beginning of his screen career this could not be said of Chaplin, often the lack of refinement and the positive vulgarity left an unpleasant effect on the mind after the body had passed over the thrill caused by the laughter ... We are glad now however to note not only the omission of the former vulgarities, but the introduction of, and general indulgence in, good clean situations which produce genuine mirth for young and old, to the exclusion of occasion for criticism by the fastidious." 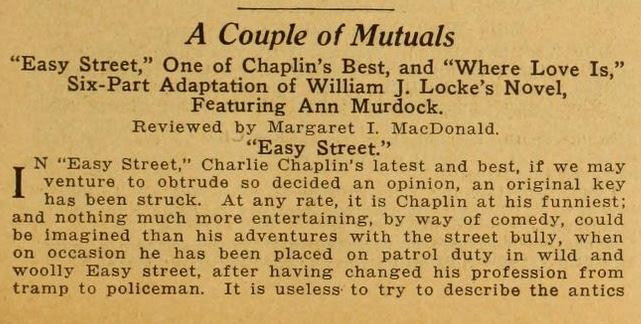 Moving Picture World's Margaret I MacDonald gave "Easy Street" a nice review.  She did object to a couple of items.

John R Freuler, one of the founders of Mutual, was trying to get Chaplin to sign up for another series of twelve films.