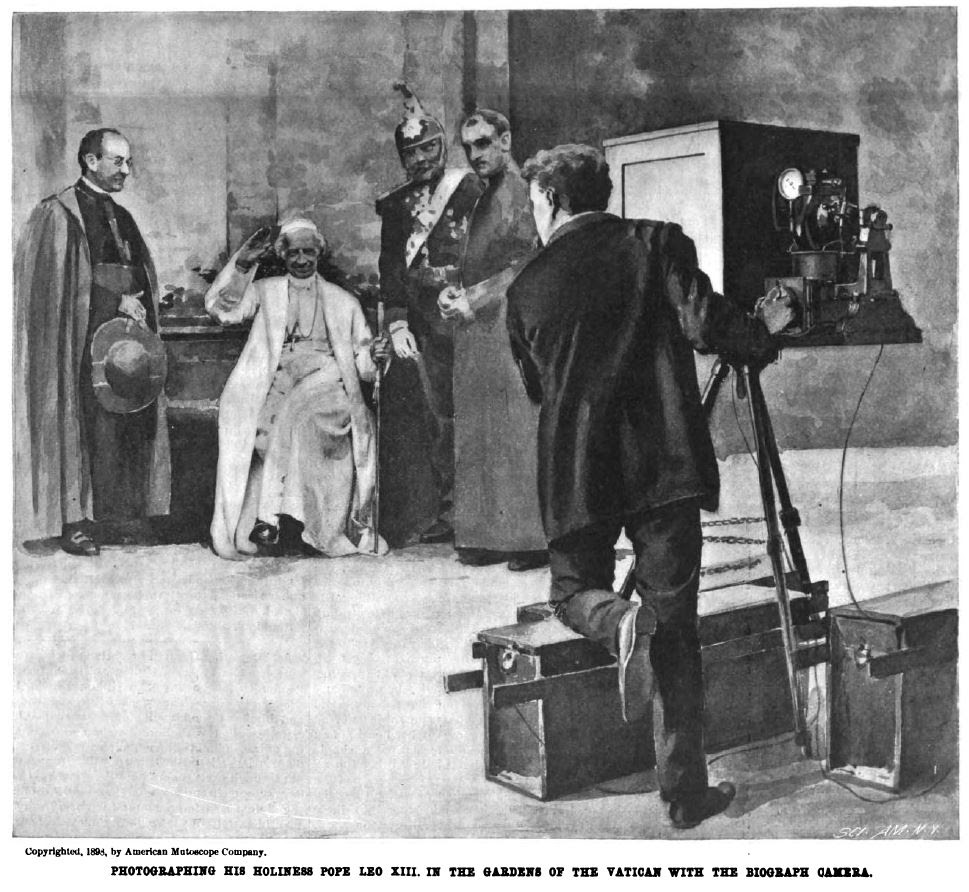 From Scientific American, 14-January-1899.  I have always been a fan of Pope Leo XIII because of his encyclical Rerum Novarum, on social justice for workers.  The Biograph camera produced negatives which could be used to make prints for projection or for showing on a Mutoscope.

Upon the announcement of the recent illness of Pope Leo XIII, it was found that with one exception no authentic photograph of the Pope had been taken during the past six years.  Within a few months however no less than 17,000 photographs of the Pope have been taken with his sanction. These photographs were taken in the loggia and gardens of the Vatican with the aid of the "Biograph" camera.

Mr. William Kennedy-Laurie Dickson, representing the Mutoscope and Biograph Syndicate, Limited, of London, England, the English connection of the American Mutoscope Company, went to Rome for the purpose of obtaining moving photographs of the Pope. He had credentials from Cardinal Gibbons, Monsignor Martinelli, Archbishop Ireland, and other noted prelates in the United States, and by special permission of the Pope he secured nine series for the "Biograph" and "Mutoscope," and these scenes were exhibited on December 14, at Carnegie Music Hall, New York city, in the presence of Archbishop Corrigan and other distinguished clergymen of the Roman Catholic faith.  They had previously been shown to Monsignor Martinelli in Washington and given his approval.

The moving views show the Holy Father walking and riding in his carriage and sedan chair about the halls and gardens of the Vatican, and in some of these scenes the Pope is seen bestowing his blessing upon the bystanders.  He is also seen walking about the garden and sitting on a rustic bench surrounded by some of the chief members of his official household and the Garde Nobili.  Through the courtesy of the American Mutoscope Company, we are enabled to show a view of the Pope seated upon a rustic bench  bestowing his benediction while he was being photographed by the Bioscope camera.  The views certainly bring us into a more intimate relation with one of the great figures of the closing years of the nineteenth century. When Mr. Dickson was taking the photographs, the Pope asked for an explanation of the apparatus. A copy of the SCIENTIFIC AMERICAN containing an article on the American Mutoscope and Biograph, published in our issue of April 17.1897, was shown him. His Holiness became much interested in the paper. The laboratory of the International Mutoscope and Biograph Syndicate, where all of the moving picture apparatus is developed and prepared for the market. is at Canastota, New York. At this laboratory there are employed a large force of inventors and mechanical experts under the direction of Messrs. Marvin and Casler, and constant efforts are being made to develop new and improved forms of moving picture apparatus and to discover new methods of taking and exhibiting moving picture views.


All the intricate and special machinery involved in the process of reproducing these views with marvelous exactness is designed and built at this laboratory, and this work requires great mechanical skill and the most perfect tools and app1iances known to the mechanical art. The accuracy of this class of apparatus will be better appreciated when one considers the enormous magnification at which these views are projected upon the screen and the rapidity with which successive views must follow each other in perfect registration. Imagine a sequence of two thousand pictures. each two inches by two and a half inches in size. following each other in turn through the projecting lantern of the biograph every minute. each picture being magnified on the screen to a size of twenty by twenty-five feet. and think how perfect must be the registration of each succeeding picture, in order that the result of the image upon the screen may not appear to dance about and vibrate. but may appear as one continuous set picture! Not only is precision in projecting required. but also in the printing of the positives from the original negative. The negative prints taken by the original camera do not always follow each other at equal distances upon the strip of film ; consequently, in printing the positives the printing machine must be able to correct this imperfect spacing and produce a band of positive prints printed perfectly equidistant.  The printing machine must also be able to properly register and print bromide pictures from the same negatives, but these pictures on a bend of bromide for the Mutoscope have to be spaced much wider than when printed on celluloid strips for the Biograph.  The printing machines are arranged to run entirely automatically, and so perfect is their design that if for any reason a print does not register perfectly, the operation of the machine stops and a bell is rung, warning the attendant that his attention is needed.  The apparatus constructed at the laboratory is sent out to the various Mutoscope companies in England, Germany, France and Holland, and any ideas in moving pictures developed by any of these companies are at once forwarded to the American laboratory for perfection and trial and in this respect the position of the laboratory is somewhat peculiar, since it is the workshop for busy brains throughout England and the Continent. 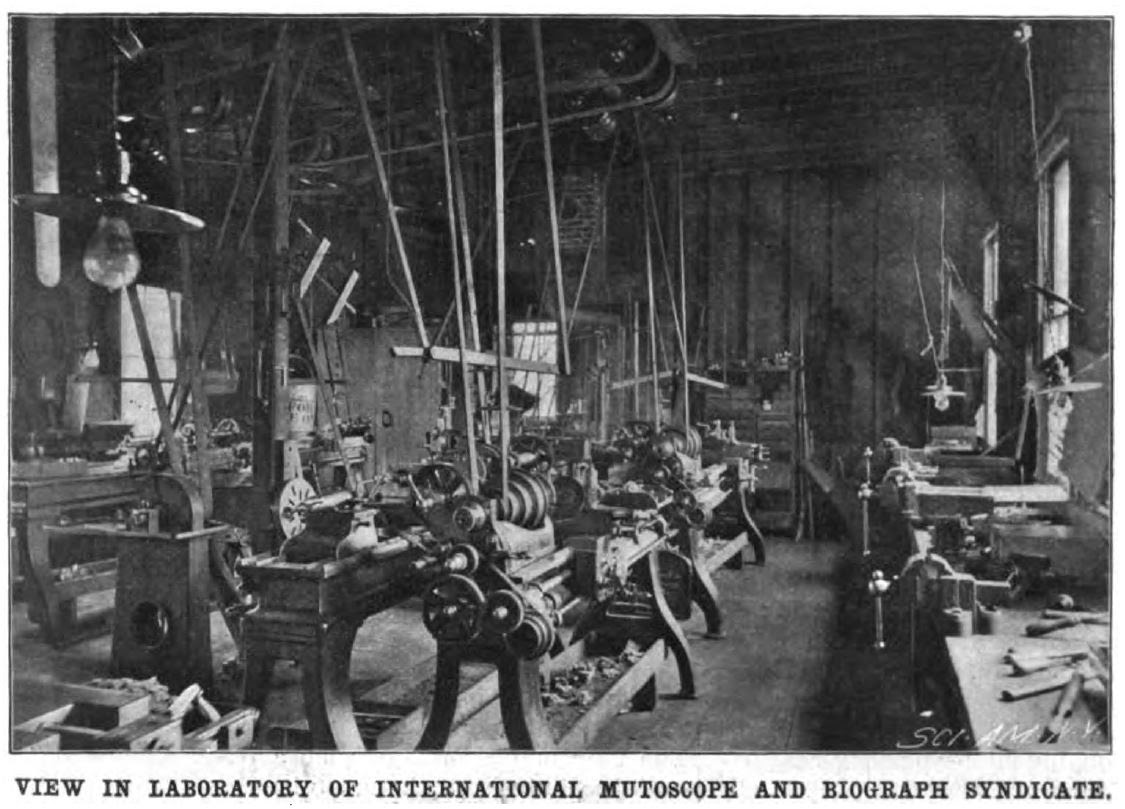 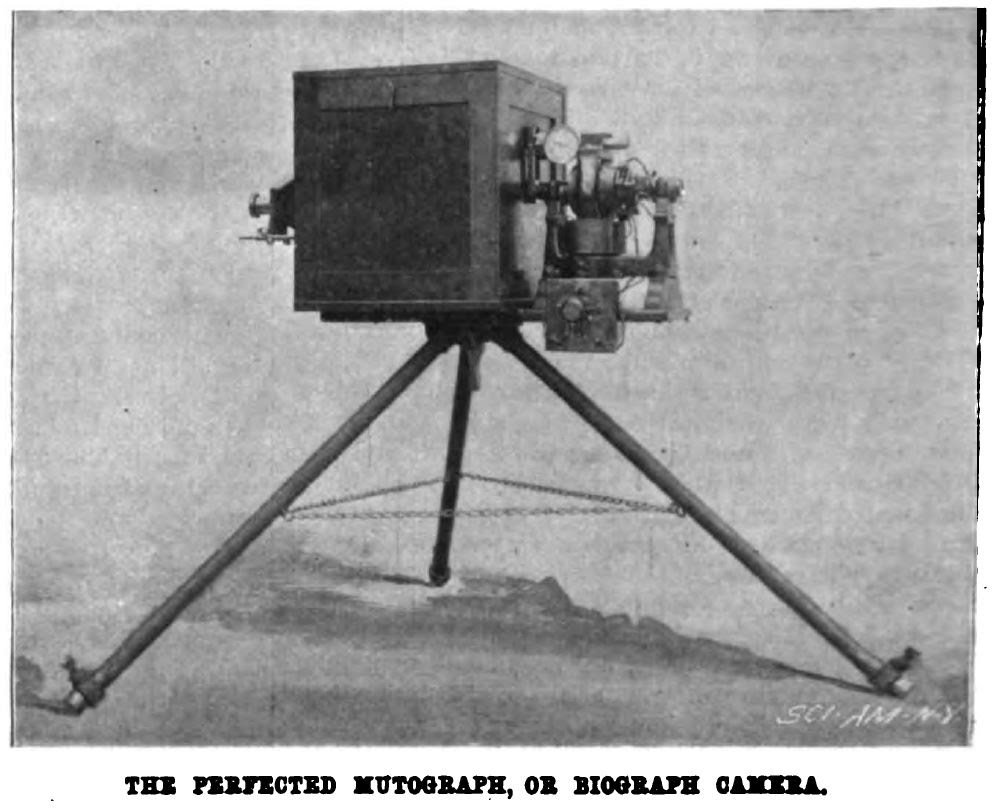