"This is Fatty -- no, this is Magnate Roscoe Arbuckle, president and owner of the Vernon Club of the Pacific Coast League."

Buster Keaton was back from his service in the Army.  Roscoe made his next film, "Back Stage," in a leased studio in Glendale.  It is a good one. 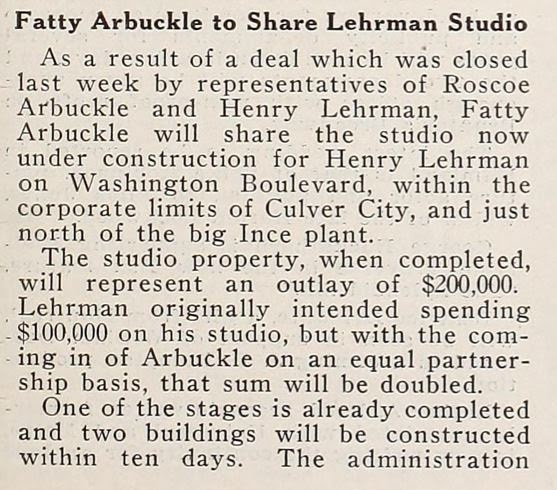 Roscoe and Henry Lehrman were planning to share a new studio they were building in Culver City.

"Buster Keaton is back in the cast ... The company is working at the Astra Studio in Glendale, Cal., pending preparation of a new studio located probably in Culver City."

Buster talked about his deafness, which resulted from the horrible climate in Europe.

Roscoe explained that he was not entering into a partnership with Pathé Lehrman, but would "become a tenant of the plant."

The new studio in Culver City was going to be near Thomas H Ince's studio.

Not only did Roscoe own a professional baseball team, he was also a big fight fan. He rode on a special train with other celebrities to see the Dempsey-Willard heavyweight championship which took place in Toledo, Ohio on 04-July-1919:
http://cablecarguy.blogspot.com/2019/07/fight-should-have-ended-in-one-round.html