100 years ago this month, in June, 1919, Harold Lloyd and his leading lady Bebe Daniels appeared in an interesting ad, especially in light of Harold's later deep involvement with the Shriners.  Things would soon change for Harold. 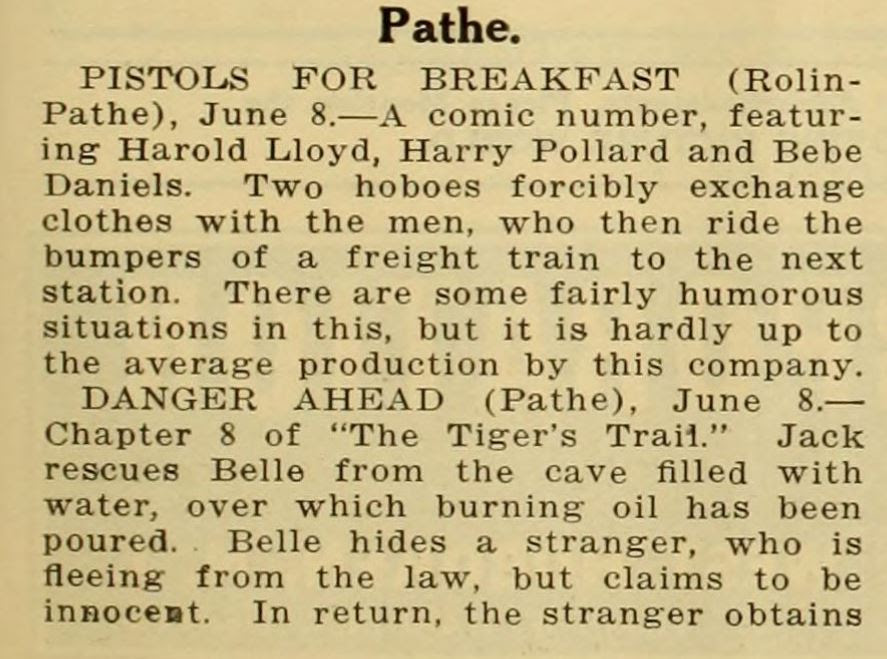 "Pistols for Breakfast" is an interesting title.  "There are some fairly humorous situations in this, but it is hardly up to the average production by this company."  Titles in the form of "Swat the [something]" were very popular.  A quick check finds these: Swat the Fly, Swat the Kaiser, Swat the Flirt, Swat the Spy .

I thought it was interesting that an Iowa theater owner held a "Harold Lloyd Comedy Week."  I don't remember any earlier references to a proto-film festival like this.

Harold and a heavily armed Snub in "Swat the Crook."

"Swat the Crook" was a satire of crime play/movie stereotypes.

Bud Jamison appears in "Off the Trolley." Snub is the motorman and Bebe is the conductor.  "Spring Fever" is said to be "One of the snappiest of recent comedies featuring Harold Lloyd, Harry Pollard and Bebe Daniels."

They must have gotten tired releasing one movie a week.

I like this image with Snub, Harold and Bebe.

Bebe, Harold's leading lady since 1915, was flying the coop to work with Cecil B DeMille.

Mildred Harris took the place of Bebe.  Later she married Harold.
Posted by Joe Thompson at 12:30 AM