From The Young Folk's Cyclopædia of Games and Sports by John Denison Champlin and Arthur Elmore Bostwick, 1890. 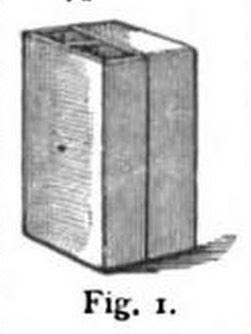 CAMERA OBSCURA. To make a rough camera, take a little pasteboard box (Fig. 1), like those in which pens are sold, and make a pinhole in the middle of the cover, working the pin about to enlarge the hole a little. Remove one end of the cover, and in the corresponding edge of the box cut a notch just large enough to see through into the box when the cover is on. On a sunny day, hold the box with the pinhole toward any bright object and look down into the end through the notch, holding the eye close, so that no light can get in except through the pinhole. A picture will be seen on the back of the box, inside, in which the bright parts of the landscape can be easily distinguished. The picture will grow clearer as the eye becomes accustomed to the light. By moving the box so that the pinhole turns in a different direction, the picture will change. The smaller the pinhole is, the less blurred the picture will be, but it will be also less bright. With a hole about 1/16 of an inch in diameter the picture will be quite bright, but so blurred that it is hard to tell different objects from each other. The box should not be more than an inch deep, as the farther the back is from the pinhole, the less distinct the picture will be. In the evening, such a camera will give an excellent picture of a lamp or candle, and even of a person's face held very near a bright light. The way the picture is made may be understood by looking at Fig. 2, where the lines represent rays of light from different parts of an object passing through the pinhole and striking the back of the box. When the cover is taken from the box, rays from all parts of the object strike every part of the box at once and are mixed together, hence there is no picture, but only a white blur.


A camera which will make the picture bright without blurring it may be made by using a glass lens (See Lenses, Experiments With). These experiments show how a lens will throw a picture, and the picture can be seen to better advantage if the lens be fixed in a hole in the side of a box. The observer may work at the picture through a hole in the top of the box, or the back of the box may be made of thin white paper, so that the picture will show on the other side. There is a certain distance from the lens for every object, where its image will be plainest, so it is a good plan to make the back of the box so that it can be slid in and out. Find the distance at which the lens makes the plainest picture of near objects before choosing the box, and then select one of the right depth. Remove the back, and saw off the edges so that it can be made to slip in as far as desired. Nail a stick to it to serve as a handle by which it may be pulled in and out.

Hat Camera. A camera can be made also from a stiff felt or silk hat, if it have a ventilating hole in the top of the crown. If there are more than one of these holes, all but the central one may be stopped with paper. A piece of thin paper is then pinned over the bottom of the hat, which is held with the top toward the part of the landscape to be observed. A black shawl is thrown over the hat and the observer's head, but care must be taken that it does not hang over the ventilating hole.