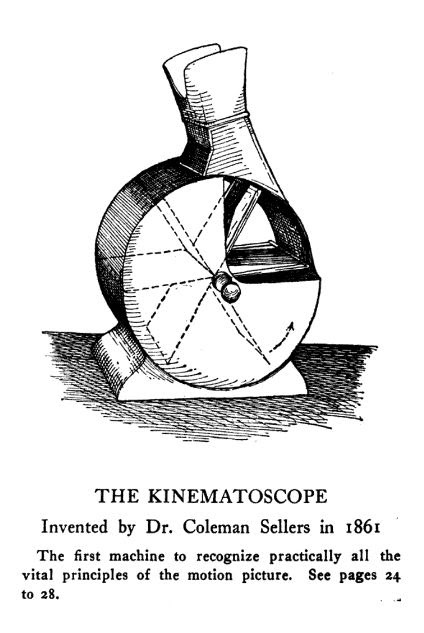 I don't see how Coleman Sellars achieved  intermittent motion with this device.

PARALLEL with the development of presenting the illusion of motion in pictures, was the study of the analysis of motion. It is this study which ultimately led, thru photography and in combination with the experiments in presentation of the optical illusion of motion in pictures, to the moving picture as we know it today. As early as 1852 a Mr. Wenham obtained a series of posed photographs showing the successive positions of a man working. These were later combined and shown by means of the Phenakistoscope with, of course, the unavoidable distortion and blur. The workman who posed for the pictures viewed the result and very indignantly asserted that he never worked like that! From now on, devices for taking and presenting photographs of motion phases were constantly appearing.

The most interesting of the early experiments, perhaps, were those of Dr. Sellers mentioned before. Most interesting because they were developed in such a scholarly way and led to the discovery of many of the essential principles involved. Dr. Sellers was a manufacturer of machines and machine tools in Philadelphia. He was disappointed in the woodcut as a method of illustrating the machines he manufactured, and was vitally interested in photography from its very beginnings. The photograph was better than the wood-cut for his purpose, but still it was not realistic enough, so he turned to the stereoscope; this was a great step towards his goal, it gave relief and separated the planes in his pictures.

Only one thing was left: if he could only show the levers and wheels apparently in motion! To this Dr. Sellers turned his thoughts, and with marked success as we shall see. He obtained posed photographs of his two sons, Coleman, Jr. and Horace Wells,— Coleman, Jr. busily driving a nail into a box and Horace watching his elder brother from the comfort of a rocking chair. In making these posed photographs with the old wet-plate process, the plates would often dry and become useless between exposures so Dr. Sellers perfected the glycerine bath which kept his plate moist for a comparatively long time and ultimately led to the manufacture of the so-called dry plate in use now, but all this was only a by-product.

The next step, after having the photographs of several phases of motion, was to have a way of presenting them in combination so as to show the illusion of apparent motion. Dr. Sellers tried devices on the order of the Zoetrope but both the blur and distortion were objectionable. He soon diagnosed the trouble and discovered probably the most important principle in the showing of motion pictures: that the picture of the series which was at the moment being viewed should be at rest during that moment, in other words, that the movement of the pictures themselves should be intermittent rather than continuous. In 1861 Dr. Sellers patented his Kinematoscope, the first use of "kinema" in this connection. It is interesting to note that this machine did not really employ intermittent motion, but a peculiarly arranged continuous forward motion which was apparently intermittent. The Kinematoscope was a paddle-wheel arrangement with the different photographs mounted on the surface of the paddles. The eyepiece was really the eyepiece of a stereoscope, and the photographs were the familiar double stereoscopic kind. By means of a knob, the pictures were turned towards the eyepiece, the eye gradually adjusting its focus to the advancing picture so that the effect was the same as if it were at rest. At a certain point one picture suddenly left the field of view and the next appeared.

Dr. Sellers obtained really remarkable results with the use of but few phases of motion, usually only three. Dr. Sellers in his patent application stated for the first time the fundamental requirements of showing the illusion of motion in pictures, "that it is absolutely necessary that the picture should be at rest during the moment of vision" and that there must be shown "a succession of pictures (taken in different positions of the moving object) with sufficient rapidity to insure the image of one being retained on the retina until the next is brought into view." Three years after Dr. Sellers' patent, Ducos obtained a French patent and also clearly stated the principle of persistence of vision involved. Dr. Sellers also provided in his patent application for another device to carry many more pictures than was possible with the paddle-wheel arrangement, and this was undoubtedly the prototype of the machines in use in amusement places throughout the country until quite recent years, machines with lens eyepieces and with the photographs turned or changed by motor or clock-work.