Actor Sterling Hayden was born 100 years ago today, on 26-March-1916.  He preferred sailing to acting, but he was in some good movies, like Johnny Guitar, Asphalt Jungle, Doctor Strangelove and The Godfather.  He enlisted in the Marine Corps during World War Two, went to officer candidate school, then got assigned to the OSS, where he worked with Yugoslav partisans and got a commendation from Marshal Josip Broz Tito. I remember how San Francisco columnist Herb Caen would write about Sterling Hayden when he lived in Sausalito. For a time he lived in one of the pilot houses of the ferryboat Berkeley, which was moored in Sausalito. 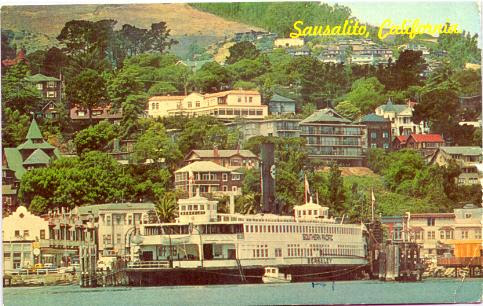 Ferryboat Berkeley moored in Sausalito in the 1960s.  It housed a warren of shops known as the Trade Fair.  It is now preserved at the San Diego Maritime Museum.
Posted by Joe Thompson at 10:00 AM