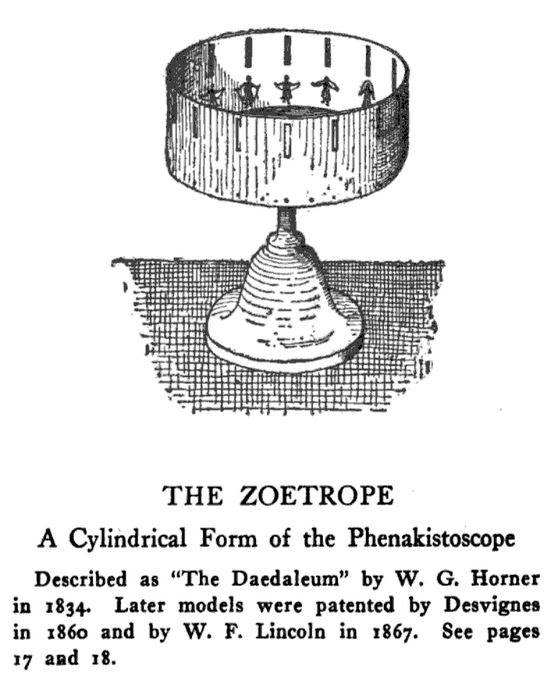 From The Story of the Motion Picture: 65 B.C. to 1920 A.D. By Ben Jehudah Lubschez.  Last month we read about WG Horner's invention of the Phenakistoscope:
http://bigvriotsquad.blogspot.com/2015/11/the-phenakistoscope-november-22-2015.html


Some twelve months after Plateau's invention of the Phenakistoscope, W. G. Horner in 1834 described the Daedaleum, a cylindrical derivation of the Phenakistoscope, later called the "Wheel of Life," and "Zoetrope." With this no mirror was needed as with Plateau's device. It consisted of a hollow cylinder which could be rotated on its axis. The various phases of a moving object were depicted around the lower edge of the inside of the cylinder, and the vertical slots were cut above the images near the upper edge of the cylinder. Looking thru the slots at the pictures while revolving the cylinder, produced the illusion. For some reason this device was not popularly introduced until i860, and it is still on the market as a toy. Various forms of it were patented in the United States, England and France. Rather serious models of it were patented by Desvignes in France in i860, and by W. F. Lincoln of Providence, R. I. in 1867.

In all devices having narrow slots for observation of the pictures, more or less distortion resulted as the picture viewed passed before the slot. If the slot moved in the same direction with the picture, as in the Phenakistoscope, the picture appeared elongated; if it travelled in opposite direction from the picture, as in the Zoetrope, the picture appeared compressed. Plateau recognized this shortcoming and compensated for the resultant distortion by distorting his original diagrams in the opposite direction, the two distortions neutralizing each other and the result being normal. In 1869, however, Clerk-Maxwell remedied this defect in the Zoetrope by substituting for the slots, lenses so arranged as to form the images of the moving pictures at the center of the revolving cylinder of the Zoetrope, thus the images would be apparently stationary. In 1877 Reynaud attained the same result in a simpler way and his device, which he called the Praxinoscope, attained a popularity which lasted many years. In the Praxinoscope both the slots and lenses were done away with: around a drum in the center of the cylinder were arranged little sloping mirrors placed half-way between the rim of the outer cylinder and its center. The reflected images of the different phases in the mirrors therefore appeared at the center of the revolving cylinder just as in Clerk-Maxwell's device. Altho by the ingenious use of mirrors the Praxinoscope was combined with the stereoptican and ultimately was used with actual photographs as one of the immediate predecessors of the film machines, it is only a variation of the Zoetrope and would be of little interest except for the fact that in it, and its prototype by Clerk-Maxwell, was recognized the fundamental principle that, to avoid distortion and blurring, the image viewed must be momentarily at rest or apparently so. This principle was independently discovered several years earlier by Dr. Coleman Sellers of Philadelphia in an ingenious photographic machine which he called the Kinematoscope, and which will be taken up later.