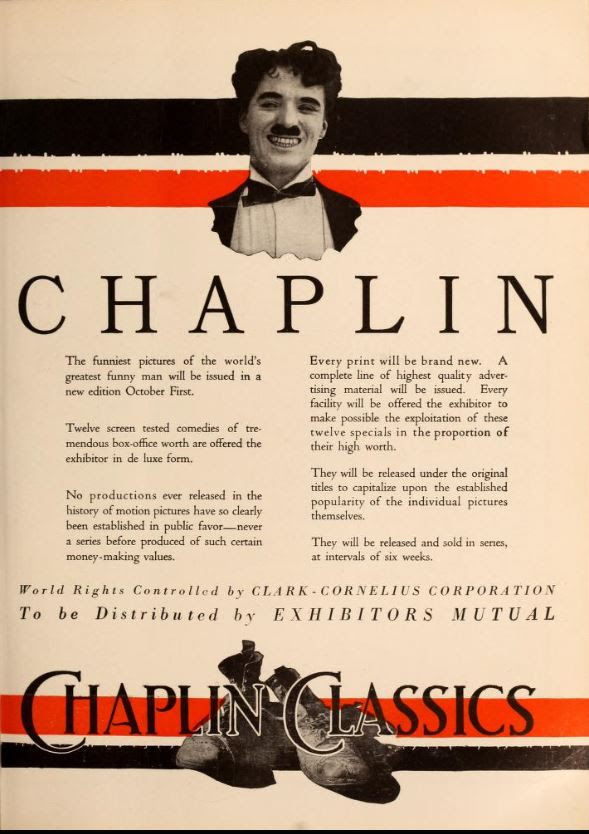 Chaplin's twelve productions for Mutual are one the two greatest series of silent short comedies, along with Buster Keaton's short movies.  Mutual made a big deal out of rereleasing them, labelling them "Chaplin Classics."  I like the image of Chaplin at the top.

The twelve Mutuals were to be released one every six weeks.  "The new edition will be in de-luxe form, with artistic new main titles and subtitles. The titles under which the productions were originally released will be retained (so) that the exhibitor may capitalize upon the popularity of the titles themselves." 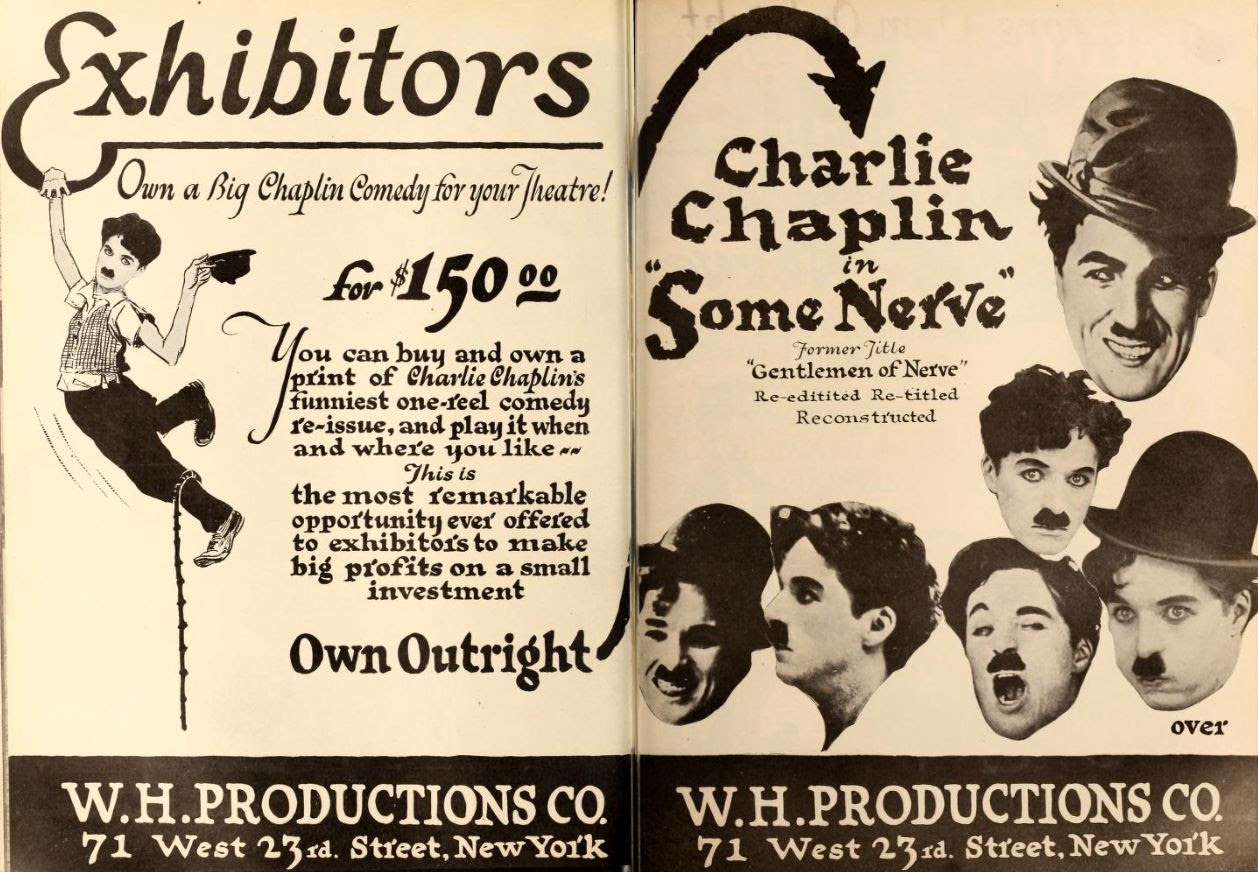 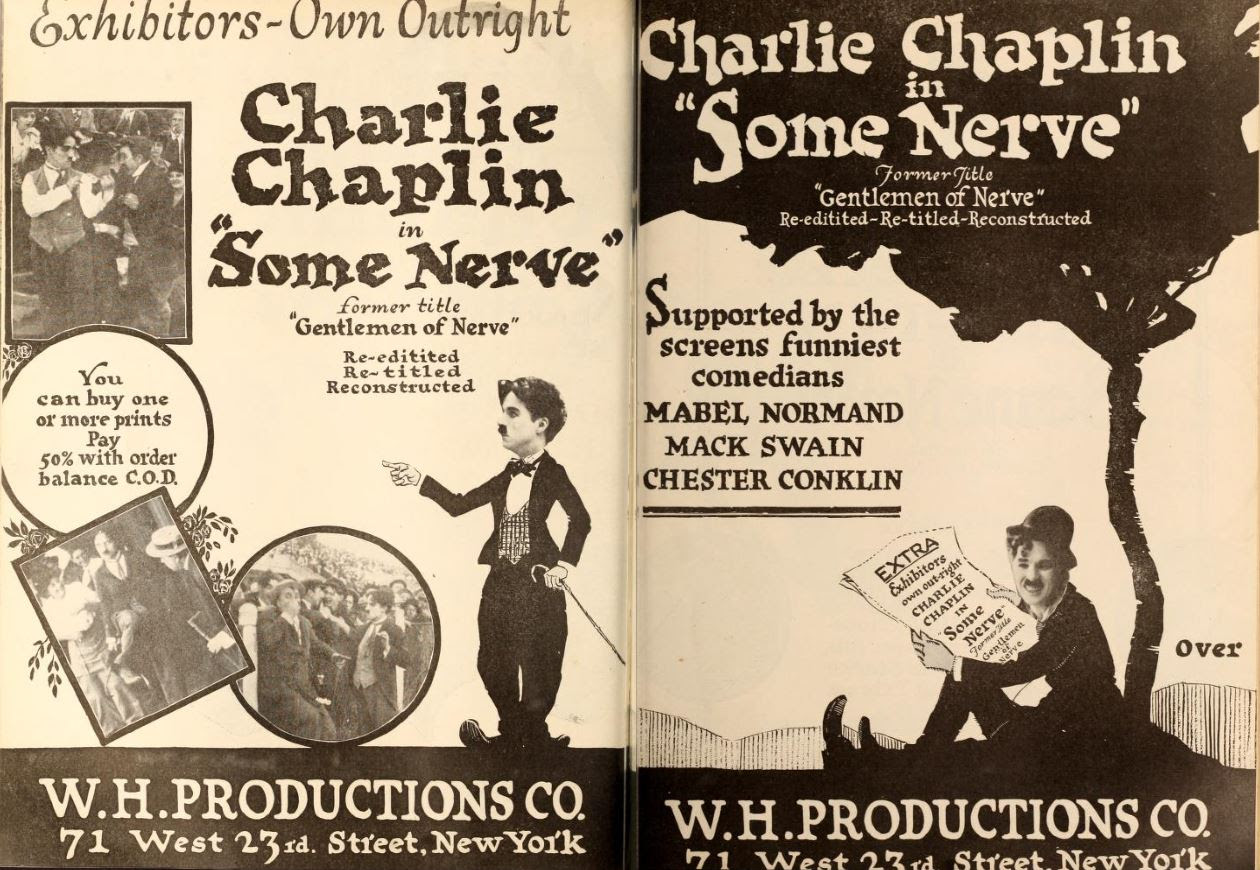 On the other hand, WH Productions used this six page ad to promote one of Chaplin's Keystone productions, which had been re-edited and retitled from "Gentlemen of Nerve" to "Some Nerve."  "Own Outright" means they were not leasing the movie, but selling prints so that the exhibitors could do almost anything they wanted.

"W. H. Productions Returns to the Early Practice and
"Will Vend a One-Reel Reissue to Exhibitors Instead
"of Exchanges— Right of Duplication Only Is Reserved

"HAVE you a little Chaplin in your theatre?" is the newest version of a well-known trade phrase that the W. H. Productions is presently to propound, for W. H. is going back of 1905 and is going to offer to sell film— one film — outright to any exhibitor who is willing to pay $150 to have a real Chaplin film always on hand.

"It is nearly fifteen years since the exchange system supplanted the old order. Back of 1905 all exhibitors had to purchase their films. They bought a program and took it over the country or used up their territory, exchanged the film with some other exhibitor and worked the territory all over again. Then the store show came in and there was need for a more frequent exchange of material, and the film rental business came into being. Since then scarcely any film has been offered for sale to exhibitors, and many companies have never sold outright a single foot of their product for use in the United States.

"About all the film the exhibitor now owns outright is either locally produced stuff made especially for him or some old junk carefully held to guard against the non-receipt of the current program.

"But W. H. now offers to sell film direct to the exhibitor without reservation of any sort, and it is a Chaplin film, at that.

It will be recalled that W. H. has recently retitled and re-edited the best of the old Keystones. One of the best of these selected films, known originally as 'Gentlemen of Nerve,' was not sent to the exchanges along with the rest but was held for an experimental disposal. It has been given new titles written with unusual care, and anyone who has the price can become the owner of a one-reel print of practically a new subject.

"The experiment has not been as widely heralded as the 'fewer and better pictures' movement, but it may prove to be even more important, for it is a more radical departure from the present methods.

"There is no restriction whatever in the sale of these prints. It is not licensed for certain territory, nor limited to a term of days or months. It becomes the property of the purchaser and he can show it in any part of the world. He can show it every day, or whenever he pleases. He can rent it to other exhibitors, sell it again or do anything except dupe it.

"Four Stars In One Film.

"The purchaser does not even have to be an exhibitor. He can purchase a copy for his own pleasure, if his inclination runs that way, and can brag that he has a story in which four of the leading stars of the old Keystones disport themselves, for while Chaplin is the featured player, he is supported by Chester Conklin, Mack Swain and Mabel Normand, all of whom now enjoy stellar honors.

"'Gentlemen of Nerve,' or 'Some Nerve' as it is now called, was made at a time when Chaplin had already gained fame and yet before fame bore so heavily upon him that he sought to prove himself an actor rather than a clown. It is more characteristically Chaplin than his later work and shows him at his best in the style of comedy in which he gained his fame.

"The experiment will be watched with interest, for it offers many fascinating angles. With such a picture on his shelf a manager is always ready to meet Chaplin opposition with the comedian's name in front of his own house, but it is unlikely that he will advertise 'Charlie Chaplin today' each time his opposition offers a fresh Chaplin print. On the other hand, he can make a feature of this from two to four times a year.

"He can, to a limited extent, farm out the picture to exhibitors in nearby towns who have not purchased copies, and in so doing he can materially reduce the first cost of the film to himself.

"And he can take a personal pride in the fact that he is the owner of the only Chaplin film not tied up to exchange use, and one of the best examples of the films which changed the entire school of comedy production.

"Is a Typical Keystone.

"'Some Nerve' represents the old style Keystone at its best. It is dependent upon the comedy business for its laughs, for it was produced before the mechanical sensations were resorted to, and it is a decided advance upon the old school comedies it displaced. It shows the Chaplin walk at its best and offers the many mannerisms which advanced the comedian so rapidly from the ranks of the Keystone cops.

"It is anticipated that there will be a heavy sale of prints and the success of this reissue may result in the release of other subjects along the same lines; a return to old ideas with modern trimmings, for there has now been provided a full set of lithographs and other advertising adjuncts.

"It is the first time in fifteen years that film has been offered for sale in this manner, and it will be interesting to note the difference in sales between today and in 1900. Then manufacturers looked to the sale of prints for their profits. The more prints they sold the more money they made. Today the"

The article ends at the bottom of a page, but it seems there should have been more.

Meanwhile, Essanay continued to try to squeeze everything it could out of Chaplin's earlier movies.

World Pictures, "The Fastest Growing Motion Picture Company in the World," was involved in the Essanay re-releases.

"They stand the test of summer heat or the blighting days of rain."

Chaplin's third production for First National, "Sunnyside," was not a big hit in Dallas.  Newspapers called it "an imposition and a joke."

The Jewish Daily Forward, a Yiddish-language newspaper, created an ad based on the appearance of their front page in "Sunnyside."

It later turned out that it was not Jack Coogan who took "part in a coming Charles Chaplin film." 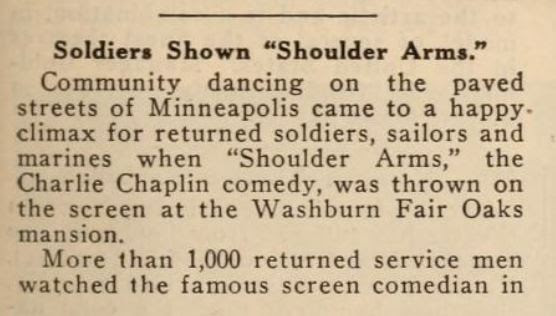 "Chaplin the Greatest Artist the Screen has Produced."  Yes.

Chaplin's wife, Mildred Harris "has entirely recovered from her serious illness following the birth and death of her first born."  I doubt that.

Louis B Mayer prepared to produced films with Mildred Harris Chaplin by acquiring the former Zoo and studio of the Selig Polyscope Company.

Chuck Reisner worked with Chaplin on "A Dog's Life" and The Kid.  Later he directed Steamboat Bill, Jr with Buster Keaton and The Big Store with the Marx Brothers.

Charlie's half-brother Sydney was preparing to go to Europe to make movies. 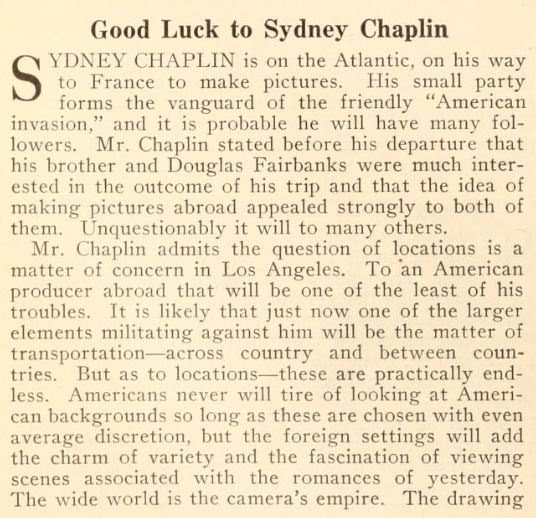 Here are Syd's remarks in Greek.

This ad purports to show a censor's report on a cablegram about Syd's new venture.
Posted by Joe Thompson at 12:30 AM