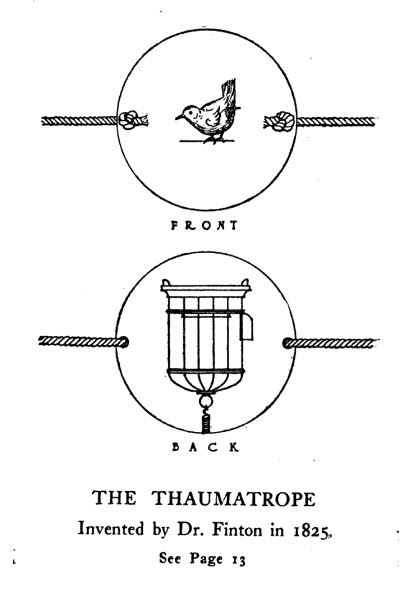 IN 1825 there appeared in England a half-penny toy called the "Thaumatrope." The early forms of moving picture apparatus, whether the simplest toys or the more serious machines, always had high-sounding and classic names. The Thaumatrope was merely a card with the picture of one object, like a bird, printed on the face; and another object, like a cage, printed on the back. Thru the center of the card was a string by means of the ends of which, the card would be whirled end for end, bringing the pictures of the two objects before the eye in quick succession and furnishing, thru the persistence of each image, the illusion of a composite of both; When one picture is a bird and the other a cage, the bird seemingly enters the cage. This toy proved so popular that a warm controversy arose as to who was the inventor. A Doctor Paris and a Doctor Finton each claimed the credit, Dr. Finton's claims now being more generally recognized, having in fact been substantiated.