The North American Film Service was releasing movies by both Charlie Chaplin and Chaplin imitator Billy West (http://bigvriotsquad.blogspot.com/search/label/Billy%20West) in Spanish-language markets.  I like the figures of Chaplin playing around his name.

Essanay was rereleasing individual Chaplin movies, along with the Snakeville Comedies, which are not nearly as funny.

Essanay was also releasing Chase Me Charlie, a feature compiled in Britain from several of Chaplin's Essanay shorts.

"Keep Up The Nation's Morale!" 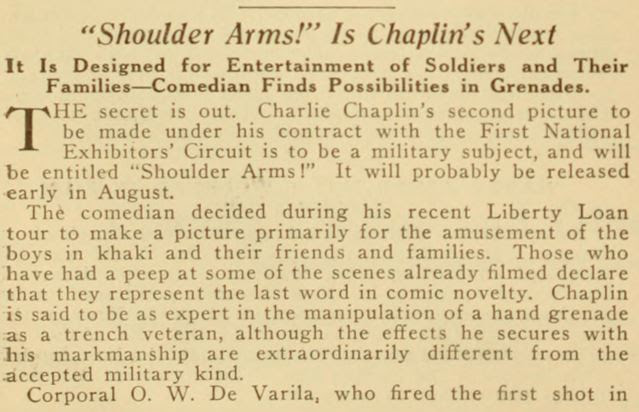 Chaplin was working on his next film, "Shoulder Arms," a service comedy, with the help of Corporal OW De Varila, "who fired the first shot in France for the United States artillery..."

Chaplin had a visit from Polish-American pianist Leopold Godowsky.  He received a lot of visitors.
Posted by Joe Thompson at 12:30 AM