Charlie Chaplin and Brownie (playing Scraps) were the stars of Chaplin's first movie for First National release, "A Dog's Life."

The Spencer Square Theater in Rock Island, Illinois featured the short film prominently in its advertising.

Charlie was inspired by a stray which sought refuge in the studio, but used a bigger dog for the movie.

Charlie got a visit from TL Tally, a Los Angeles-area exhibitor and Vice President of First National.

Someone mentions Charles Joshua Chaplin, the Nineteenth Century painter.  The author has his dates a bit off.  CJ Chaplin lived from 1825 to 1891.  He was a Chevalier de la Légion d’Honneur.  Read about him in Wikipedia:
https://en.wikipedia.org/wiki/Charles_Joshua_Chaplin

Three reels was an unusual length for a comedy.

"His first picture for 8 months."  "And it's a 3 reeler without a foot of padding and only 11 short sub-titles."


With Chaplin gone for more than a year, Essanay released Chase Me Charlie, a feature compiled in Britain from several of Chaplin's Essanay shorts.  They referred to it as "A Chaplin Jingle."


"The sub-titles are in verse form and the comedy is a Chaplin jingle, although the main title is "Chase Me, Charlie." George Kleine distributed the film.

At the same time, Essanay continued to rerelease Chaplin's individual comedies.  Some of these were also part of Chase Me Charlie, such as "His New Job," "The Tramp," "In the Park," "The Champion," "A Woman" (listed as "The Woman"), "By the Sea" and probably others. 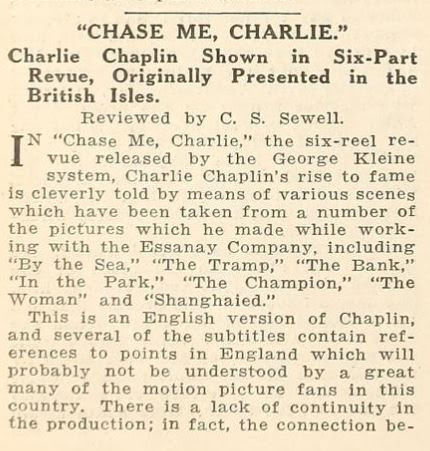 "While there is a lack of continuity, there are many laughs."  "This picture was originally presented in England, and many of the subtitles have a distinctive English flavor and refer to English location."

In this ad, Charlie juggles a bunch of Charlies and drops one Charlie.

Chaplin left Mutual, but his short comedies were still in distribution, legally or not.

Meanwhile Charlie toured the country with his friends Douglas Fairbanks and Mary Pickford to promote sales of Liberty Bonds to pay for the war.

It appears that Chaplin was going to pay a solo visit to Atlanta to promote war bonds.

Chaplin did not wind up in the US Army.